One of the reasons I enjoy living in southern Arizona -- other than the weather and fantastic Southwest food -- is the cowboy tradition, even though the term "cowboy" here was originally a slur, covering the cattle rustlers who dominated this region during the heyday of the 1880s.

Everybody knows about Tombstone, and I've written about its history. Few people, however, know about Empire Ranch, just twenty or so miles away from Tombstone. It's a working ranch, but you've seen it. Over thirty movies, some of them, like Winchester 73 and Red River, epic have been shot at Empire Ranch, along with television programs such as Gunsmoke and Bonanza**. Indeed, you might recognize the twenty-two thousand square foot frame and adobe ranch house, no longer occupied, which now serves as a museum of days gone-by.
Founded on one hundred sixty acres of homestead land in 1876, Empire Ranch went through numerous owners, some British, some who fled during the wild period between 1878-1888 and vowed never to return "to this bloody country again." But through every ownership change, the ranch grew. At one time, Empire Ranch covered more than a million acres, all of it set between the beautiful Santa Rita and Whetstone mountain ranges, the area now known as Sonoita, in Santa Cruz and Cochise counties. This region features rolling hills, sudden canyons, disappearing streams and vast fields of waving golden grass. The mountain ranges in the background appear as islands in an endless sea of bright blue sky. And because there's altitude gain south of Tucson, Empire Ranch is much cooler and receives more rain than most of the Sonoran Desert.

Over the years, the Depression, taxes and rising feed and material costs have caused pieces of the ranch to be sold off. In 1988, through a public-private land swap, the U.S. Bureau of Land Management (BLM) acquired the ranch lands, which were designated the Empire-Cienega Resource Conservation Area. In December 2000 the U.S. Congress established the area as Las Cienegas National Conservation Area (LCNCA), encompassing 45,000 acres. Since then, two families have run the ranch under a BLM grazing lease.

In 1997, a group of private citizens formed the Empire Ranch Foundation, a non-profit organization dedicated to ranch preservation and history. The Foundation works in partnership with the BLM to determine the future uses of the buildings and public education about rural life in southeastern Arizona.

Spectacular setting and loads of fun. 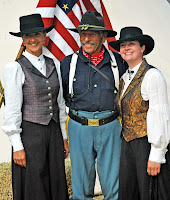 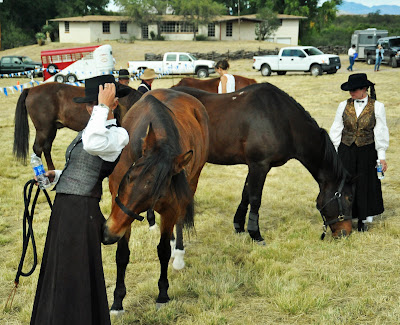 I don't think horsey liked the salute she gave me. Look at his eye... 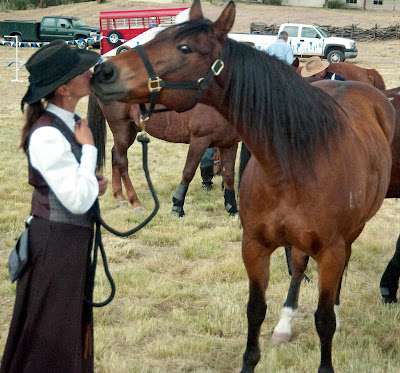 Need I say I beat a hasty retreat?

Loved the post. Incredible number of films shot there and I've seen many of them.

Beautiful country and such rich history.I've also seen many of the films from that area.

That's an impressive list of movies, Ben, but what really impresses me are your photos. They are excellent. You should think about a second (third, fourth?) career as a photographer.
Pat Browning

Ben, the roundup sounds like great fun. I love the antics of the little bay horse. You did a great job of capturing the character of the place and the event--and the horse.

I agree with Pat about your photos.

Thank you Beth & Pat, I bought a professional camera before my last trip to Croatia, so that I hopefully could catch a cover shot for my next book. Don't know yet if I got one that good, but as I learn more about the camera and about photo editing, the pix get a bit better. I still have much to learn, but as they say... take baby steps. :)

From a photojournalist: you're shooting quite well!