A Long Look Into The Past

It hardly seems like fourteen years ago, but it became what I'd chalk up as a most unforgettable venture. Here, slightly edited, is how I described it in a piece I wrote a few years later:


Back in September of 2004, my wife, Sarah, and I undertook our most ambitious book signing tour, a five-day gig in Orange County, California. We did all our travels by car, so we made a two-week trip out of this one. Sharing the driving time kept a fairly fresh pair of hands on the wheel.


While cleaning up my desk the other day, I came across a small note pad with a few scrawled pages of cryptic notes jotted down during that trip. It’s interesting to see what random thoughts I chronicled from all we saw in traveling most of I-40 from Nashville, Tennessee to its end at Barstow, California. The pages only covered the trip out. We did our sightseeing on the way back, including a visit to the Grand Canyon.


According to my little book, we departed Nashville at 7:20 a.m. on Monday, Sept. 13. My first entry showed “cappuccino in Jackson,” which put us well into West Tennessee. I might add that we became addicted to cappuccino around this time, a habit that has stayed with us to the present. We like the kind you find in truck stops and gas stations along the Interstate. At home, we mix ours with powder from Sam’s.


I notedconstruction as we neared the I-40 bridge across the Mississippi. And the rain doused us with bucketsful as we trekked across Arkansas. However, I noted the temperature in Little Rock was a steamy 94 degrees. We stopped there for lunch at the Cracker Barrel. We made a habit of eating at Cracker Barrel. You knew what to expect and it’s invariably tasty.


As the weather improved, we zipped across Arkansas and kept pressing on until it got dark on us at Shawnee, Oklahoma. We picked out a likely looking Best Western not far off I-40 and checked in. Bummer. The restaurant was closed and the pool shut down by order of the Health Department. We were too bushed to look for another place so settled into the third room they gave us (the first had no a/c, the second door wouldn’t open).


Tuesday dawned with a welcome red ball in the sky. After we crossed into Texas, my notes mention “buttes, maize, cattle.” I was also impressed by the colorful lights on the Texas troopers’ cars. Happily, they didn’t flash them for us. The New Mexico border brought a mention of the state’s 75 mph speed limit. Another salient (not the word Sarah used) feature was the rustic rest rooms at their rest areas.


The farther west we traveled, the higher the elevation. I noted the landscape consisted of “high plains with zilch,” indicating little of descriptive value as far as I could see. We cruised through Albuquerque, where the colorful Spanish architecture impressed me . As the sun dropped lower, we found ourselves nearly blinded by that unyielding glow on the horizon. We stopped for the night at Grants, 6,466 feet up, a little shy of the Continental Divide. My notes say we ate at the 4B’s Restaurant, although it wasn’t memorable enough that I recall anything about it.


Since we had left Tennessee and were heading for California, we came dressed for summer weather. The lofty altitude left us shivering when we stepped out of the room Wednesday morning. We also discovered that the price of gas kept going up as we traveled farther west. My notes show $1.79, which doesn’t sound bad today.


Arizona brought more high plains and lots of rock. The different colors in the rock and the way they seemed piled about in places proved most noticeable. We stopped briefly in Flagstaff to check out the Grand Canyon tours for the following week, then began the downhill trek toward the California border. We found it a desolate area, with a 50-mile stretch between Seligman and U.S. 93 that was packed with absolutely nothing.


We crossed the border into the Golden State and stopped at Needles for the night. I had made a reservation at a motel there, but when we arrived they informed us the air conditioning was out. We said no thanks and went across the street to a nice Motel 6, where they had left the light on for us.


My final scribblings on Thursday indicate “Barstow 40 ends, the LA experience begins—more lanes, more traffic.” For some reason I failed to make note of the long stretch through the Mojave Desert before we reached Barstow. It was somewhat reminiscent of the landscape I experienced on a trip to the Holy Land a few years earlier. 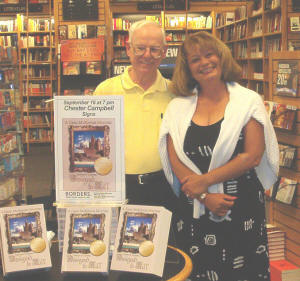 My penultimate note indicates the freeways appeared not as bad as Atlanta, “just more of ‘em.” The final entry says only “Katherine’s tour.” But it was one of the highlights of the trip. Dear author friend Katherine Shephard took us on a tour of Orange County the day after we arrived. Kathy had a personality I can only describe as bubbling with enthusiasm and, as someone else said, a zest for life. She was a most gracious hostess. She had things to do but took time to drop by my signing at Barnes & Noble, where this photo was made.


Kathy was the one who had given me the contact that got the B&N signing. Sadly, about the time we were there, she was diagnosed with the cancer that took her life after a long and valiant struggle. But her hospitality was one of the highlights of our tour, which included an appearance at the annual Men of Mystery event in Irvine, California and signings at three Borders stores.