Fit to be Tied

I'm also a bit terrified at the prospect of joining this august body. Unlike my esteemed colleagues, I am not yet a published crime fiction author, though I am working on it. I'll chat about that from time to time.

But more than anything else right now, I am thrilled to announce to the world that I bought a decent pair of shoes. 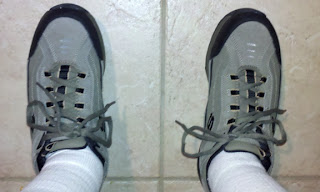 Okay, that’s not particularly thrilling news to most of you. Honestly, any clothing purchase is really outside my normal celebratory sphere. But this pair of Skechers Shape-Ups is the first pair of shoes I have purchased in quite a few years that has not presented immediate danger to life and limb.

I blame it on the U.S. penal system. And street gangs. And the police. The fashion police.

I suppose full disclosure demands I take my share of the blame as well, and that requires that I reveal something of myself to those of you who do not yet know me.

I am a cheapskate.

I come by my frugality honestly, from parents who came of age in the Great Depression, and perhaps a bit of a stereotypical boost from some Scot ancestry. I don’t like to spend more money than I have to on basic necessities, and I tend to keep things until they wear out or fall apart.

I remember spending $8.95 at K-Mart for a pair of Trax sneakers in 1976. Back then, there were three kinds of shoes: dress shoes, work shoes, and sneakers, unless you were buying them for school, in which case you’d call your sneakers “gym shoes”. For whatever reason, $8.95 is the price point that has stuck in my mind, and the one I strive for when buying a pair of shoes.

With the exception of some two-dollar thrift store loafers purchased for inclement weather, I have not met that price point in quite a while. Even “regular” sneakers are difficult to find under $39.95. Heck, they're difficult to find at any price. And I wouldn’t venture a guess at the price of designer pneumatic Air Jordache athletic shoes, even if they are pumps. (What happens if your pumps get a flat?)

It's bad enough that I can't get a decent pair of sneakers for $8.95. To add injury to insult, for nearly ten years, the sneakers I have purchased have been dangerous to wear, right out of the box. The laces are too long.

I still don't understand sagging as a fashion trend. But t 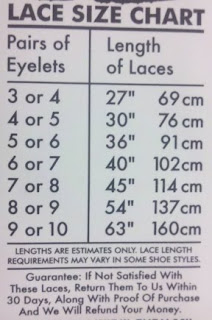 I laughed at this one:) I have a couple pairs of shoes with laces too long and it drives me nuts. Then again, should I ever need to escape from a hotel window on the seventh floor, they may come in handy.

They also come in handy if you're trapped in a Viet Kong POW camp, and you need to tie up your guards. Just ask them to sit back to back, and tie their thumbs together.

Hey, that's what they did in the first treatment of The Deer Hunter. The Russian Roulette that made it to the shooting script was due to diligent lobbying by the special effects coordinator.

Welcome to Murderous Musings, Johnathon. I love your shoe lace commentary and couldn't agree with you more. I love Sketchers, especially the ones with stretch tops that don't require shoe laces. I tie the ones that do in a double knot like I did for my kids when they were small. Hey, whatever works. :)

Laughing my fanny off. Good one, Jonathon! I have a terrible time buying shoes, because mine are size 16 and narrow to boot. Speaking of boots, I have no arches, so need inserts. And of course, some inserts sit inside the boots I must wear differently in various pair. So I have to continually experiment, because I can't feel my feet (peripheral neuropathy) because of Carpal Tarsal Syndrome. I stumble a lot because I have no idea where my feet are, but I can ride a bike like a devil, as long as I periodically glance down to see where my pods are. Argh. And I always seem to buy laces too long, so I end up scissoring them, which makes eyelet-sticking a bitch. Then, I pull the match-trick, which leaves the ends ugly but functional...just like me. :)

Ben, I used to work with a fellow who wore 17AAA. He was more or less average height, and maybe 170 pounds. We called him Tut behind his back, because he could walk like an Egyptian...

I place the shoelace thing in the same category as the hot dogs per package vs. hot dog buns per package problem.

Yes, Jean, I'm enjoying the Skechers. I simply don't buy name-brand shoes (and when the New Balances I got, see the second photo, had overly-long laces that confirmed my position). But my wife had a no-name pair of shoes like the Shape-Ups, and convinced me to try them. The heels are rounded, and the soles squishy. They're supposed to simulate walking in wet sand. (They're also supposed to shed the pounds, straighten my back, and freshen my breath, if I remember the product information correctly.) All I know is they're comfortable.

I have a certain husband who would agree with you on all this, Jonathan! Good luck with the publishing pursuit--I suspect I can relate more on that level than in terms of the shoes ;) And congrats on joining the great folks on MM...

Jonathon, my nickname used to be "Gunboat."

Ben - I think "Gunboat" is probably a better nickname than "Love Boat".

Jenny - I'm glad you have a certain husband - uncertainty can put a strain on a relationship. Thanks for stopping by!

Great start Jonathan, but I'm not going to get drawn into personal confessions about shoes ... Oh, OK then, just the one. In a moment of what must have been total lunacy, I paid £150 for things calling themselves MBT (or MTB or something) because they had TECHNOLOGY. That's way way over three times as much as I've ever paid before. They're comfortable etc. but the price tag still hurts.

The real question is...does your butt look firmer yet? Shape Ups are supposed to do that.

I came close to looking at my own butt once, but I was just beside myself.

Jonathan, as usual, your observations are profound -- and hilarious.

In Springfield, Oregon, across the river from where I live, a robber in baggy pants held up a store (or it might have been a bank). As he ran away, his pants fell down and he tripped. He got up and fled, and was found by the cops hiding in his underwear in the bushes.

Oh well, at least he was wearing underwear...

You are so right, Jonathan. Double-tying is a big help. Also, the extra holes and/or hooks at the top are good for using up lengths of string.