I call it Autumn, you call it Fall

As I shovel(l)ed leaves off the sidewalk/pavement (it's actually just the side of the road as there are neither sidewalks nor pavements on/in my street), I pondered the difference between Autumn and Fall. Obviously Fall is accurate, as the task I was doing demonstrated, but how much more atmospheric the word Autumn is. When and why did Americans decide to call the season Fall? 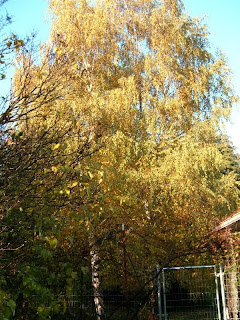 The autumn view from my office window

I spend a lot of time figuring/working out the differences between English and American. Having grown up in England, lived in the US for four decades, and written books set almost all in England and in three different periods, I find it very easy to confuse the two--not so much words as phrases. In pursuit of accuracy, I look up absolutely everything I'm not sure about, both as to which side of the Atlantic it belongs and when it entered one or t'other language.

OED is a wonderful resource for this. Many years ago friends found the Compact edition on sale, bought it for me, and lugged it all the way home. For those who don't know, it's the entire 27 or so volumes packed into two--with a magnifying glass included. It weighs a ton. I consulted it so often I never needed to work out with weights. Now I have it online at the click of a mouse. Partridge's Dictionary of Slang and Unconventional English is my other sine qua non.

The other day both failed me. When, I wondered, did the phrase "run circles around" someone come into use. Nothing in OED or Partridge under either circle or run. I've never had much luck with googling phrases--there are plenty of sites but they mostly explain without dating. So I moaned on Facebook. Two people suggested websites: <http://www.phrases.org.uk/meanings/> and <http://www.etymonline.com/index.php?term=helter-skelter> But best of all was to find an FB page, Phrase Finder, where you can actually ask questions.

Phrase Finder tells me "run circles around" is American. The earlier English phrase is to "run rings round," which comes from the revolting "sport" of hare coursing (now banned I hope and believe).

OED is not infallible. It has many American words and phrases, but misses a lot, too. However, the online version avoids one of the big problems of the paper original-- Online you see only the definition you specifically asked for; I used to spend far too long reading definitions that caught my eye!

Hey, I'm a writer, words are my business (and, I confess, I'm addicted to looking things up whether I need to know or not). 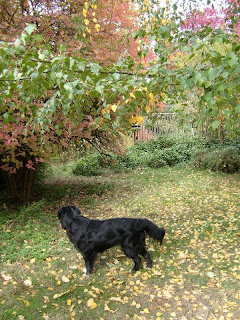 Trillian admiring the autumn colo(u)rs--actually she's hoping for a squirrel or two.
Posted by Carola Dunn at 2:00 AM

I'm also addicted to looking things up and trying to decide whether certain phrases are well worn enough to be classified as cliches.

Btw, you have a lovely yard, no matter what it's called: fall or autumn. (I think the term "fall" refers to autumn's falling leaves.)

First citation for Fall for the season is 1545 R. ASCHAM Spring tyme, Somer, faule of the leafe, and winter. (Ascham was English.)

OED also says Fall is still used in some UK dialects. I guess/suppose that's how it travel(l)ed to America, but I find it interesting that it became the preferred term in the US as Autumn seems to me a much more emotive word, given all the other uses of fall.

Spring is another interesting word--the German is Frühling and French is printemps, so Spring doesn't come from either. But don't get me started on looking that up...

I love the sound of "Autumn," but I confess to using "Fall" more often.

Interesting post, Carola, and I look forward to playing with the links.

I prefer the sound and impression 'Autumn" makes, as well, and do my best to use that in preference to "fall".

The UK/USA variations in English are mostly entertaining and I can't imagine them causing any difficulties for readers. I find it strange, though, that my latest, The Figurehead, which is set in Scotland in 1840, is peopled with folks saying 'he didna tell us' and 'ye ken' and yet they all work round the 'harbor' etc. But I guess it's OK - it worked for Star Trek and Scotty's 'Ah canna hold her, captain'.

There's no understanding copy-editors, Bill. I gave up years ago. Just fight when I must and let the rest go. I did manage to keep the title of my latest ColoUrful. And most UK spelling, but always US punctuation including full stops/periods after Mr Mrs etc, which at school I was taught was wrong.

I've certainly had plenty of seething 'what planet does this editor live on?' moments Carola, but I didn't mean to suggest it was a problem in this particular case because my editor, Robert Wetherley, was terrific and picked up all sorts of things which I'd missed or got wrong.

The US/UK differences just make me smile. I've written books on academic writing and in that field it's a bit of a nuisance because of the different conventions and the picky nature of academia, where everything MUST be 'correct'.