Feeding the Inner Child Can Be Dangerous

by Jackie King
In Julia Cameron’s book AN ARTIST’S WAY, she speaks of feeding your inner child. My problem is, I’m so busy taking care of my old-girl self, that there’s little time left for outings with some kid that lurks in my psyche. However, yesterday I had to return a purchase to the mall, and after struggling through the wildly blowing Tulsa wind into the sweetly scented department store, I decided that both me and my inner-child deserved a treat. (I’m super good at rationalization.) I picked up a shirt when this inner-brat spoke up, “Why don’t you get something different? I’m sick of beige.”
Am I developing a split personality?
Somewhat unnerved, I put back the top and wandered on through the store. Maybe Inner-Child would prefer a nice navy blue? I strolled from sportswear into blouses and stepped within arm’s length of a dressy print top in shades of orange, yellow and brown. The effect was a bit like viewing an abstract painting and I made the mistake of pausing a minute.

That one, Brat said.

My civilized (beleaguered?) self, smiled and spoke in a (silent) faux-calm voice said, “Okay, we’ll try it on, but will make us look fat.” I looped the blouse over my arm and moved on. Four racks over I spotted a splashy flowered print. I reacted with one word:
“Yuck.”

“Try on that one, too,” Brat said.
And I thought my child rearing days were over!
Grown-up-lady rolled her eyes. If anything would make us look ridiculous (an important fear to me, but Brat didn’t seem to care) this garment would. But the jacket was unlined, cotton and sported three-quarter sleeves. Very comfortable for summer, and we mature ladies love our comfort. What the heck, might as well try that one on too.
The two of us, brat and woman-of-a-certain age, (not sure who was leading whom), found a dressing room and tried on both items. SHOCKEROO: My older self decided to buy both! Grown up self loved the blouse; Brat insisted on the blazing blazer.

Feeling more than a little daring, I headed toward hats. I was getting into this. If child and grownup joined forces, what might happen next? 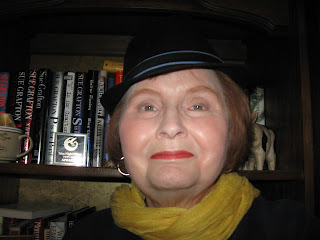 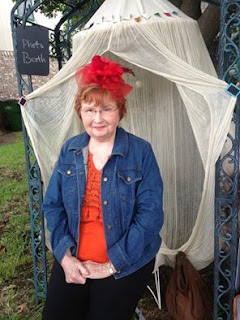 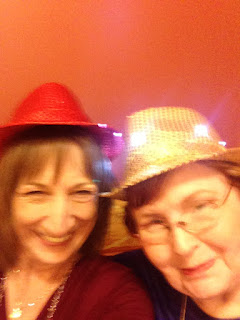 You guessed it! I now have a dozen! Perhaps my Inner Child morphed into an Inner Wild-Child?
Posted by Jackie King at 12:00 AM 6 comments:

Spring is my favourite season, and here in western Oregon we get 5 months--February through June. Here's some of what's blooming in my garden at present: 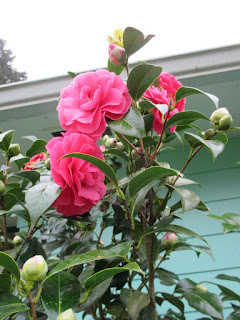 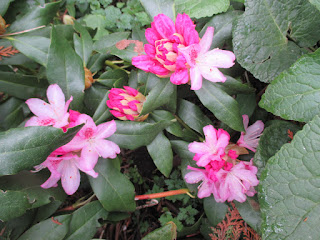 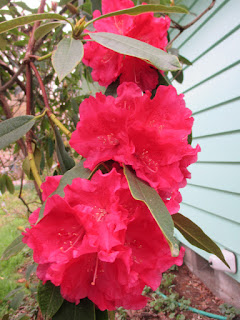 The North of England is not generally so lucky, so when Daisy Dalrymple, my 1920s sleuth, heads to Cheshire to write about historic Occles Hall (based on Little Moreton Hall), she doesn't expect to see beautiful flower gardens. But the Winter Garden is sheltered by high brick walls and Spring arrives early there. Unfortunately, what Daisy finds is a buried body...

The Winter Garden Mystery has just been reissued by St Martin's Minotaur with a wonderful new cover, to match the later books in the series. 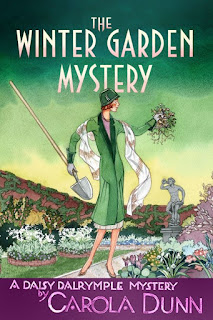 That's not all that is coming out in March--Another month, another audiobook! Having finally got around to it, Blackstone is producing the Daisy Dalrymple audios at a great rate! The latest is the 10th in the series, To Davy Jones Below: 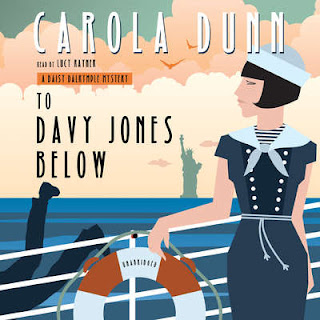 Daisy, newly wed to DCI Alec Fletcher of Scotland Yard, embarks for America. Their hoped-for honeymoon is disrupted by people falling overboard to starboard, port, and astern. Not to mention fog, and a gale that has Alec confined to his bunk with seasickness while Daisy carries on the investigation single-handed. Alec emerges just in time for a shipwreck and yet another mysterious death!

Finding that just-right name for the people in your story gives you a head-start in finding and keeping a publisher and an audience.

Names for characters come to me in two ways: instantaneous and easy, or slow and tedious. Sometimes when the idea for a book appears in my mind, the name of the main character walks in the door with it. Other times it takes me weeks or months to come up with the right moniker.

I’m currently working on a novel and the villain’s name isn’t quite right. I’ve already changed it once, and this choice is better. Still, I keep probing my brain for one that completely suits. The working name for the character is a sort of “dofer” to use while I keep writing the book.

Getting that just right name is crucial. Character names must come from the right historical period. If you name a female character Madison or Hailey, and the story is set in 1889, your lover-of-historical-fiction might throw your book across the room before they finish chapter one.

Where to start when you’re stuck?
What year was your character born? Make sure the character’s name fits the year he/she was born. If nothing strikes your fancy, you can always use a classical name in eras. Elizabeth, Victoria, Jacob, or Matthew would fit 1889 or 2016.

Biblical names also work for most any year of birth. Sarah, Mary, Luke or Mark, have been popular birth names in most periods. Currently unusual biblical names are being used, especially when you use a nickname. Zachariah is currently popular and is often shortened to Zach or Zack.

Google It
Figure out the year your character would have been born. Go to Google, my favorite search engine and key in: “Baby names popular in 1979” and up pops 100 names for babies born in that year. Both boys and girls are listed in the order of popularity.

Use this list to find the name that best suits the person you have created. Speak the names out loud. Imagine the character’s parents struggling over the choice or arguing about the name. Sometimes this can even be worked into the plot of the story.

What to avoid?
Avoid names that are too long and names that begin with the same letter, such as Jacob, John, Jackie, Jessica, Jeff, and Jennifer, all in the same tale.

Names that end with the letter “S,” will muddle the use of possessive nouns, as I learned when I named a character Mavis. This isn’t something that would cause an editor to reject the book, but it does complicate the writer’s life (and the reader’s) in an unnecessary way. Mavis’ car seems more complicated than Sandra’s car.

Don’t use cute spellings. Even if you know someone who spells her name Marylyn, it’s still better to use “Marilyn.” Oddly spelled names can detract the reader from the story. The point is to keep folks reading, not cause them to stop and ponder something that has nothing to do with the character or plot.

Final advice on naming characters.
That infamous rule of writing, “There are no rules,” always stands. If you have a good enough reason to name a character something weird—do it with my blessing.
Posted by Jackie King at 12:00 AM 4 comments: