While the Clock Ticked...

From the beginning of crime fiction, timepieces have played major roles, ranging from the illusory to the concrete. In The Telltale Heart, Poe describes the sound of a beating heart as “a low, dull, quick sound, such as a watch makes when enveloped in cotton”. The description is subtly sensual, but also metaphorical – the ticking watch representing both the steady beat of life going on, and also the abrupt manner in which it can run down to nothing. Recently, this metaphor was restated, much more bluntly, in the HBO series, Dexter, as one character intoned, “Tick, tick, tick. That’s the sound of your life running out.”

That line is an excellent summary of the most common appearance of clocks – the representation of an absolute deadline approaching. How many times has 007 defused a bomb with 3 seconds remaining on the clock? Or a worried detective glanced across a smoke-filled room to a clock approaching a ransom deadline?

Hercule Poirot solved the mystery of The Clocks. The Hardy Boys learned what happened When the Clock Ticked, even as Nancy Drew learned The Secret of the Old Clock. The Boxcar Children faced The Haunted Clock Tower fifteen years before the people of Hill Valley tried to save the clock tower. 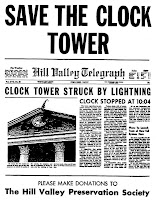 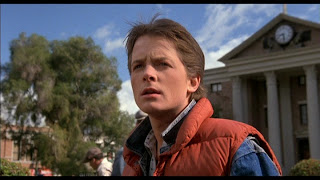 While the Dexter quote above refers to the ticking of a watch, prior to the appearance of relatively inexpensive, accurate quartz watches, clocks were more likely to play that role. Clocks held more respect, in a sense - nobody would have thought of leaving the house for an important appointment without first checking their watch against an accurate clock. And that brings me to the prompt for this little musing.

Standing in the room with me is my grandfather’s grandfather – a 1907 Gilbert long case clock. (The name “grandfather clock” became common with the popularity of Henry Clay Work’s 1876 song, “My Grandfather’s Clock”.) My dad spent most of his retirement restoring the clock, the work delayed or repeated for myriad reasons over twenty years, until 5 years ago, when he took a fall from a stool while reinstalling the movement into the case. Dad wasn’t hurt, but the clock suffered enough damage to end the project. It came to me a year ago, and sat untouched until my wife offered the challenge to get it running in time for Thanksgiving guests. (Thanks for the prod, honey!)

The past month has been a journey, to say the least. With the aid of several old books, and the members of an online horological community, I straightened several parts bent in the fall, fabricated new leather tips for the strike hammers, and resynchronized the strike gear train. Then repeated several steps to get them right – I wasn’t satisfied with a clock that struck the hours continuously until the weight ran down.

And then I sat back, and listened. The clock does not sound like it does in my memory. Replacing the old, hardened leather with new mellowed the sound quite a bit. One experienced clock repairer told me it probably sounds like it did when new. Is that good or bad? That’s a complex question to answer.

While the "new sound" is much more pleasant, it is the old sound which is ingrained into my soul. It heralded the 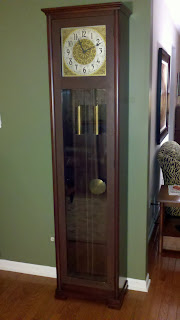 arrival of Christmas (and Santa). It rang in each and every New Year - the year I had my first camera, it was the sound that signaled time to click the shutter as my parents posed patiently, with the clock hands pointing to "XII" behind them. At 19, it gently nudged me that it was time to drive my young lady friend home. This clock was the time standard of my life - it never occurred to me that any other was more trustworthy. Even when, as a teen, I began periodically checking and adjusting the clock against National Bureau of Standards time broadcasts, I viewed it as part of an organic process which did not impeach the accuracy of the clock.

During my teen years, when I suffered bouts of insomnia, the old sound was my staunch companion through the long nights. During over-night term paper sessions, it encouraged me to carry on, and, eventually, to panic. During college years, it called out a warm greeting to me during phone calls home.

So restoring the sound to "factory new" was not an easy call. The right call, but also the wrong one.

I've got more work to do – I took a lot of shortcuts, which need to be addressed relatively soon. But it's good enough for now. I've met Karin’s "by Thanksgiving" challenge, and I'm quite happy with that. I closed everything up that first night and started the pendulum swinging around 11:25. By the time I had settled in with my book, the house had gone quiet. And the clock struck midnight, welcoming the arrival of a new day.

I love clocks, Johnathon. I have an assortment of antique clocks as well as a beautiful grandfather that's never worked. Now that you've restored yours, you're welcome to start on mine. :)

Well, Jean, I can hardly say I have restored this one. I cut a lot of detail from my first draft. Having informally studied clocks off and on over many years, actually repairing one that matters gave me an idea how much I have yet to learn.

Perhaps the greatest lesson is that, all my preconceived, romantic notions aside, clocks, particuarly 19th century mass-produced American clocks, are precision instruments built with rather old technology. No matter how well cared for, a 100-year-old clock has worn bearings which must be rebushed and polished, in some cases corrosion to be arrested, to say nothing of any cosmetic issues. A master does all that with relative ease - I muddled through, with the support of some patient experts.

I've got a couple of clocks of similar age to practice on, before attempting a full restoration on this one. We'll see how that goes...

A lovely mixture of metaphorical and real, Jonathan. I also admire your willingness to undertake the task.

I'm a great fan of clocks such as yours - but only in other people's houses. The moment I become aware of a clock's ticking, I hardly hear anything else. It's not from any phobia about time passing, but just the regularity of the beat, the need to mark the rhythm along with it - I don't know, but it's an insistent thing.

Jonathan, what a beautiful post. I love the way you wove the emotions the clock evokes in you with the mechanics of making it work. That's quite a trick, and you did it seamlessly.

I've always been intrigued by grandfather clocks, but I'm a mechanical nebbish, so I applaud you for being able to do such intricate work (both literary and horological).

My wife's first husband worked for Western Union back in the days when it was the way to send messages. I used Western Union to send stories to my newspaper back in the early fifties. Anyway, when the company modernized its timepieces, he got a couple of them to use in his home. We still have one in our living room. It runs on a big nine-volt battery that makes a buzzing sound every hour or so as it rewinds the spring. You can hear the pendulum making its click-slick when the TV is off and the room is quiet. Old clocks like this have a certain fascination, no doubt. It has grown on me over the years and become a timely part of my life.