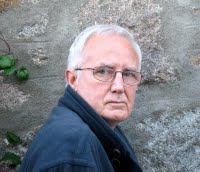 by Jean Mead
Bill Kirton began his career as an English actor, playwright and broadcast script writer. He now balances his police procedural novels with promotional work for North Sea oil companies at his home in Aberdeen, Scotland. He has also written a series of study skill books for students as well as dissertations.
His latest novel to appear was The Figurehead. "It’s a historical crime novel set in Aberdeen in 1840. It came about because a friend said to me one day ‘You should write a book about a figurehead carver. I had no idea why he said that but, since my PhD was on the theatre of Victor Hugo and I love the whole revolutionary period of the 1830s and 1840s, I did some research and found I loved it. Readers of crime are very sophisticated and know all about DNA and other arcane forensic processes, so it’s good to set a crime novel at a time before we enjoyed such refinements."

His research involved a lot of reading of contemporary newspapers and so on, "but also I wanted to know how it felt to carve a figurehead so I joined a woodcarving class and that became a hobby of mine. I also signed on as part of the crew of the beautiful Norwegian square rigger Christian Radich and sailed from Oslo to Leith for the Tall Ships Festival. That was a very special experience."

Asked when he knew he was a writer, he said, "I think there’s a difference between when I knew I was a writer and when I heard other people say I was. I knew it from very early days–probably when I was around 11 years old, because I used to enjoy writing things–mainly funny stories but also playlets (awful, awful things–I found one a few years back and while I suppose it was OK for someone of that age, it definitely didn’t show any early promise).

"As for encouragement, I don’t remember that with specific reference to writing, but Dad was a great reader and my brothers, sisters and I were all encouraged to do all sorts of things. But I was in my mid-twenties when I was invited to the newly opened Northcott Theatre in Exeter because a BBC producer, on the strength of some scripts I’d sent him, had told the director, the late Tony Church, that I was a playwright. Tony showed me round the place and we met one of his production team. Tony introduced me with the words ‘This is Bill Kirton. He’s a writer.’ I’d never heard it said before and I haven’t forgotten the pleasure it gave me."

Bill first wrote parodies of poetry for the school magazine and a couple of articles for the university newspaper but the first piece he was paid for was a radio play, "An Old Man and Some People," which was broadcast on Radio 3 and Radio 4 by the BBC in 1971, when he was 32. He's had several more plays broadcast since but considers his first his best..

He writes full-time because writing is also his day-job. He once served as a lecturer in the French department of Aberdeen University, "but I also did some TV and radio work. This led to me writing scripts for safety programmes and documentaries and then on into brochures, promotional and educational material and more or less all types of commercial documents and programmes. I live in Aberdeen, remember, so the oil industry always needed scripts and press releases. I was getting so much of that to do that I eventually took early retirement to concentrate on my writing.

"This balancing of writing fiction and hard commercial fact is interesting. I’m always aware that the commercial work is what earns the money but I’m always happier when I’m writing what I call my own stuff. The commercial material has its own rewards. Most companies want to say the same things about themselves (i.e. how brilliant, safe and environmentally responsible they are), so there’s a challenge in finding new ways of saying it."

He says the worst part of his commricial work is when the management of a company (and this has happened with the biggest oil majors as well as smaller outfits), can’t be bothered to give a specific briefing about what they want and instead, hand you a bunch of technical manuals or their last dozen brochures and say ‘It’s all in there’. This means I’m not only a writer, I have to second-guess which parts of the manual or brochures is still relevant, needs to be stressed, etc. It takes ages, costs them more money because of the extra time I have to spend on it, and almost always needs rewriting because they realise that they’d forgotten to tell me to include X or Y or something. . . But still, the fact that I can sit at home and make a living that way is far preferable to most other jobs I can think of."

What attracted him to mystery writing? "It seems as if all my answers are indirect because I didn’t really have this mystical thing which whispered to me ‘you must write a police procedural’. It was much more prosaic than that. I’d written mainly stage and radio plays and the occasional short story and one day I read of a novel-writing competition. So I started writing a novel. And that in itself was interesting because, like most other people, I thought ‘Wow, a novel. That’s long. Quite an undertaking.’ But I soon realised the perhaps obvious truth–that you don’t ‘write a novel’, you write a few sentences, some paragraphs and, at the end of each day, the pile of pages is that much bigger.

"And, if you’re enjoying it, you eventually see that it’s actually looking quite a substantial heap, so you’re determined to finish it. I did finish that one. It was a spoof crime novel and, in fact, I’m reworking it at present in the hope that a publisher might like it.

"Having done that, I was ready to write another and that one (which eventually became The Darkness was triggered by a chance remark made by a waiter at a local restaurant. He had an English West Country accent. I said ‘You’re a long way from home’ and he told me he’d chosen to come as far away from his home as possible because his wife and two daughters had been killed by a drunk driver who’d spent just six months of his sentence in jail and was then released. ‘Two months for each life’, as the waiter said. It affected me very deeply and I retained it. It eventually grew into my second novel, which was a stand-alone thriller. My then agent sent it to Piatkus, an independent publisher in London, who said ‘we like it but we’re not doing thrillers at the moment. Has he got any police procedurals?’

Bill works from about 8.30 a.m. until 6 p.m, with a fifteen minutes break for lunch, and "the time rarely drags. If I’m really into it, I go back for more in the evening, too. Watching football is my relaxation from writing and, when it’s a good game, I’d rather watch the game. Because I’m basically lazy. But I do love writing. When I’m into a novel, I’m completely absorbed by it. I have no notion of the passage of time, or of self or surroundings or anything. It’s a great privilege to be able to lose oneself so completely in an activity."
Posted by Jean Henry Mead at 4:18 PM

Welcome to our blog team, Bill. It's great to have you join us. I look forward to your posts. :)

Bill, I've always enjoyed your comments, and look forward to reading your posts. Welcome aboard.

Wonderful news! Welcome aboard Bill. I look forward to your posts.

Bill one of my closest friends here in St. Louis is from Aberdeen. He has a fantastic picture from his childhood standing with Alex Ferguson back when Ferguson was managing Aberdeen :). Look forward to reading your posts!

I shall look forward to your posts Bill.

Thanks all for the lovely welcome, especially Shane's wonderful reminder of the glory days of Aberdeen Football Club - which follows on their record 9-0 loss last weekend. For those of you unfamiliar with soccer, that's a humiliation to rank alongside the tragedies of Aeschylus. So I won't be blogging about them, but look forward to being part of this great team.