The Other Brazilian Cocktail

The caipirinha (the name translates as “little country girl”) is Brazil’s great cocktail of success, the one that spilled across our borders into the bars of half the world. 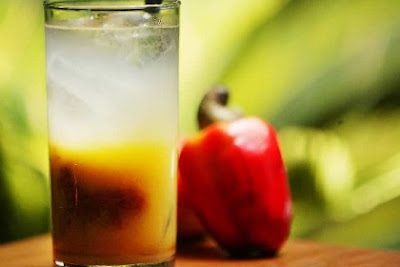 But how many of you have heard of the Caju Amigo? (Friendly Cashew.)

Caju Amigos are, basically, a mixture of cachaça (can spirit, extracted from sugar cane juice as opposed to rum, extracted from molasses) and juice from the cashew fruit. 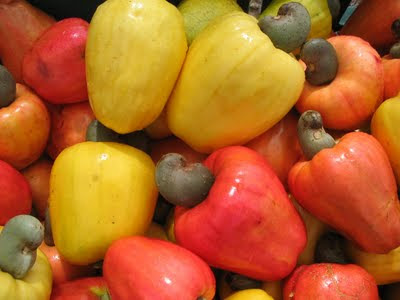 The cashew fruit is native to Brazil.

See that little appendage on the bottom?
That’s a double shell. 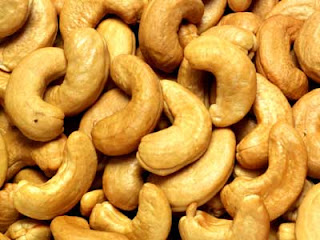 Which contains the nut.

The shell is quite poisonous.
The nuts have to be carefully roasted to destroy the toxins.

But the fruit is anything but poisonous.
And it’s quite delicious.

I don’t think it’s likely you’ll  have a cashew tree in your garden. 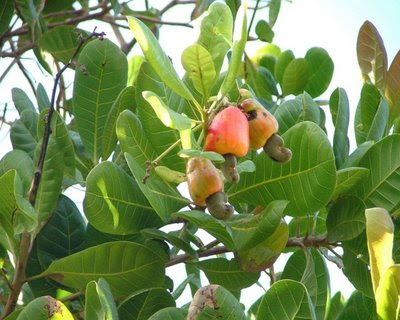 Not unless you happen to live in Brazil, Goa, the Philippines, Panama, Mozambique, Malaysia, Thailand, or a few other places around the world where their cultivation is popular.

The juice, however, is a different story.
You can get it in many major cities.
I’ve bought it in New York, San Francisco, London, Paris and Rome.
And I always found it the same way: by going onto the internet and locating a shop that sold Brazilian products.

And once you score a bottle of the stuff, there’s nothing simpler than making a Caju Amigo. All you have to do is to mix 2 parts of cachaça, one part cashew juice and a teaspoon of sugar. That’s it!

Serve it in a tall, chilled glass, over ice. Use vodka, or even rum if you can’t get cachaça. 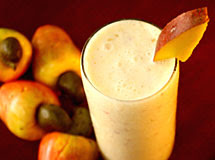 You can also put the ingredients on a blender – and call it a Batida de Cajú.

But, if you’re lucky enough to be able to get your hands on one of the fruits, then try it this way:

Put a slice in your mouth and chew it. Then take a shot of straight cachaça – and swallow the fruit and the drink at the same time.

That’s the way the machos do it.

Fascinating, Leighton. How many can you drink before you're legally intoxicated?

In the size of glass shown, probably only one. Trouble is, they don't taste anywhere near as strong as they are, so you've got to sip slowly, the first time, to see how it hits you.

This sounds wonderful, Leighton. I'm going to try to persuade Mike to get the ingredients and make some for us. Yum!