The Fear Artist Is an Award Winner

Tim Hallinan is my favorite thriller author. His Poke Rafferty series hits you at the gut level. The characters are a diverse lot that will tug at your heartstrings, make you laugh, absolutely infuriate you, and bring about a dozen other feelings. But they'll remain indelibly impressed on your mind. The stories take you into the heart of Bangkok's seamy side and keep you on the edge of your seat as Poke tangles with a succession of bad guys. I just finished the fifth book in the series, The Fear Artist. 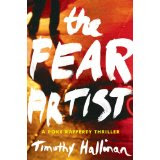 With Poke's Thai wife, Rose, and their adopted daughter, Miaow, visiting Rose's mother in the north of the country, Poke is ready to repaint their house when he collides with a man who dies of gunshots in his arms. The man utters a woman's name and a U.S. city before dying. This makes Rafferty a person a great interest to Thai secret agents who want to know his connection to the dead man and what he was told.

Poke winds up on the run from the police and an American named Murphy who is working with them. In an effort to find out what he's up against, Poke seeks out a motley group of former spies who inhabit one of Bangkok's offbeat  bars. He learns he's been caught on the fringes of the War on Terror being masterminded by Murphy, a man who was involved in the Phoenix Program during the Vietnam War. He's the most sadistic, unprincipled character I've run across in ages.

Like all of Hallinan's books, The Fear Artist delves deeply into the rationale behind the characters' actions. He brings back Poke's half-Chinese half-sister, a sharp-witted, quick-acting teenager, and his best friend Arthit, a Bangkok policeman, who he unhappily deceives. Poke, an expatriate American, expresses a lot of angst at his home country's actions involving the War on Terror and treatment of ordinary citizens, but he is no less critical of his adopted country's policies.

Two Vietnamese women, one with leftover wounds from the war in the sixties and seventies, and a mistreated waif of a girl, a daughter of Murphy's, are particularly poignant characters. The ex-Russian spy Vladimir lends some comic relief to the story.

The Fear Artist, check it out here, should win some awards.

Visit me at Mystery Mania
Posted by Chester Campbell at 11:53 PM

Tim is one of my favorite thriller authors as well. In fact, his QUEEN OF PATPONG is one of my old time favorite novels. He's the only male novelist I've read who can write so convincingly from a woman's viewpoint.