Of such is the Kingdom of Heaven - part 2 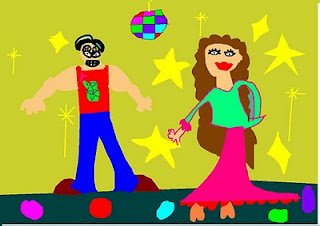 The continuing saga of my primary day out and three more stories from the enthusiastic imaginings of 5-10 year olds. One class began its story by choosing a title: ‘The blue truck’. It was set in and the cast consisted of:


The owner sold the blue truck, which had to leave and go to , where it was miserable. The pink truck was bereft, of course, so she organised a rescue. The fork lifts hoisted the pink truck onto a boat and the fairies made the racing car magic so that it could fly. In , the fork lifts broke down the door to the garage where the blue truck was being held and they all flew back to .

This next one I liked for its offbeat, almost cool attitude to its characters. It began, for example, with a caveman called Ugg sitting by the sea fishing. Not far away, lying on a rock, singing and combing her hair was a Goth Vampire Mermaid with red eyes. In the woods just off the beach lived a fairy whose intentions were evil. Having established all this, they shifted their attention back to Ugg and his fishing. He got a huge bite and, after much difficulty landed his catch, a shark. I asked them what Ugg said when he saw he’d caught a shark. One boy answered ‘Nothing. Cavemen can’t talk. But the shark said “Hi, I’m Steve”’.
In the end, the fairy and the shark merged and became a merman and I suppose he lived happily ever after with the Goth vampire mermaid, but we never got that far because more plot strands were still being developed when the bell went.

I’ll forego telling you of the upside down mountain in the sky, the turtles from Pluto, the alien girl called Sag, etc., and just sketch the outline of the final example. A plane is flying along, piloted by a lion and a leopard. It has only two passengers, a tiger and a spider. They’re flying from to . (In the case of the spider this choice of destination is bizarre since he’s doing it to get a sun tan.) Anyway, I said we needed some conflict so the passengers started arguing about who was the stronger. When some kids said that was too obvious because tigers are obviously stronger, I suggested they think of ways a spider might possibly win. So the spider crawled up the tiger’s nose and spun a web, then did the same in his mouth.

This meant the tiger was having great difficulty breathing. But the leopard co-pilot heard the tiger choking on the cabin intercom and went back to investigate. (An aside, there was the predictable suggestion that the spider could also crawl up the tiger’s bum. This came from a gentle-voiced, sweet-faced girl but added little to the plot.) The co-pilot persuaded both passengers that they had their own particular strengths and should learn to respect one another.

But suddenly, the plane stopped and hung there in mid-air. It had run out of fuel and was only being held up by the hot air rising from a volcano. This gave the spider time to spin a huge web, which they could use as a parachute. They jumped out, began to float down into the volcano but the three big cats all blew hard together in the same direction and they floated clear and landed on a warm beach.

As I left at the end of the afternoon, I was walking past a file of kids on their way to get their coats etc. and was pleased and relieved to be invited to give several (very low) high fives. It was a great day of uninhibited creativity and another nice reminder of the privilege attaching to being someone whose trade involves words, ideas, relationships, and escape as well as understanding.

Young children have such great imaginations before it's dulled by watching too much television. I enjoyed teaching writing to elementary school kids almost as much as I enjoy the process of writing.

You're right, Jean. The fundamental meaning of the word 'education'is, of course, 'leading out' - the implication being that you expand kids' potential, lead them out into a wider world. Instead, we herd them into predetermined, restricted channels.