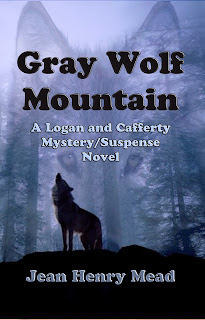 
When I began writing my Logan & Cafferty mystery/suspense series, I decided to focus on various social problems, including serial killings in A Village Shattered, drug gangs in Diary of Murder and homegrown terrorism in Murder on the Interstate.

For my latest novel, Gray Wolf Mountain, which was released last week, I researched the unwarranted mass killings of wolves, both in this country and Canada. What I learned was shocking. In the northern Rocky Mountain states, where wolves have been removed from the endangered species list, gray wolf pups are gassed in their dens and buried alive, while adult wolves are killed by shooting them from aircraft.

In both the U.S. and Canada, where government mandated numbers of wolves must not go below one hundred, female wolves are captured and sterilized. Also in Canada, where the Keystone Pipeline is under construction, caribou have been dying off because their natural habitats have been destroyed. But wolves have been blamed for the caribou deaths and nearly a thousand have already been reportedly killed from the air.

In the Yukon Territory where biologists track wolf numbers and their locations with radio collars, the Game and Fish Department is killing great numbers of wolves from the air so that the caribou numbers will increase to 100,000 while wolf numbers dwindle to a hundred in the entire territory. Why? To attract big game hunters.

Why should anyone be concerned about the demise of the wolf as well as the grizzly bear, which is also under consideration here in Wyoming to be de-listed. Because they're both keystone predators who influence their habitat’s entire ecosystem and keep the animals that eat plants in check. That in turn increases plant growth and the survival of birds and animals which depend on the plants. It also prevents a build-up of large game animals who will starve to death due to lack of food. In other words, killing off the predators unbalances nature.

To prevent my books from becoming boring nonfiction tomes, I added my two amateur women sleuths, who are always stumbling over bodies and getting themselves caught in the crosshairs of illegal hunters, terrorists, drug gangs and wolf killers, to name a few. By adding humor and a little romance in the form of a lovesick sheriff, as well as a few quirky characters, I can inform and hopefully entertain my readers.

(Gray Wolf Mountain is available on Kindle and print from Amazon.com.)
Posted by Jean Henry Mead at 12:01 AM

Jean, there are far too many wrongs being done these days. Sadly, the wolf, one of my favorite animals, has always taken the fall, and I say that in the most literal sense of the word. Anything that can be done to exposure their plight is helpful.

I agree, Mark. I think few people are aware of the consequences of killing off one species of animals and thereby unbalancing the ecosystem.

I love this fast-moving tale of the plight of gray wolves. Whether or not a reader is concerned with our ecosystem (and I hope they are), they should read this exciting mystery novel.

Thanks, Jackie, for the kind words.