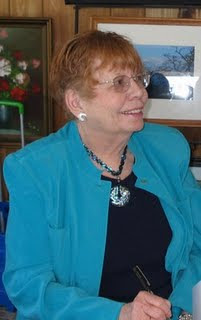 Begin by reading the kind of books that you want to write. Pay attention to how the books begin, how the characters are introduced, how the suspense rises, the dialogue and what makes you like the book.

Attend writers’ conferences and read books on writing. Many people have the mistaken idea that just because they know how to “write” that they can sit down in front of a computer and write a book without learning how. There are many rules about writing a book—yes, some can be broken, but not until you know what they are.

If possible, join a writing group. It’s helpful if the members are writing in the same genre as you, but not absolutely necessary. What you mainly need are people who know about writing and will give you constructive feedback on what you’re written. Listen to what they have to say. You don’t have to take all their advice, but think about it. Frankly, I learned the most about writing from the members of my critique group—the same one I still belong to after 30 years. Develop believable characters. Keep notes about them so they don’t suddenly change eye color or the spelling of their names. Speaking of character names be careful to pick names that don’t rhyme with the other character names, or start with the same letter, or all have the same number of syllables.

Write regularly. If you can, write every day even if it’s only for a short while. The more you write, the better you’ll write.

When you think you’ve finished your novel, it’s time to start the rewriting process. Print it out and go over each page diligently. Check that you’ve been consistent through out. Make sure the dialogue sounds natural but either moves the plot along or reveals character. Are the characters three dimensional?

Don’t rely on the spell and grammar checker. You’ll need to check on the printed page. Many common words have different spellings and meanings. And if you’ve used fragments in dialogue because that’s how a character speaks, you don’t want to make the changes suggested.

When you think you’re done, the manuscript is polished, have someone take a look at it who is a professional. You never want to send something off to a publisher or agent that isn’t as close to perfect as you can make it.

Submitting to publishers is a whole other topic, but just let me say this: follow each agent’s or publisher’s guidelines exactly. They receive so many submissions they’re looking for a reason for rejection.

Never give up. With my first book I received nearly 30 rejections before it was accepted. I did a lot of rewriting in-between those rejections. I’ve had plenty of rejections since, but I never gave up. Rejections are part of being a writer. Sometimes you can learn from the rejection.

About Angel Lost: As plans for her perfect wedding fill her mind, Officer Stacey Wilbur is sent out to trap a flasher, the new hire realizes Rocky Bluff P.D. is not the answer to his problems, Abel Navarro’s can’t concentrate on the job because of worry about his mother, Officer Gordon Butler has his usual upsets, the sudden appearance of an angel in the window of a furniture store captures everyone’s imagination and causes problems for RBPD, and then the worst possible happens—will Stacey and Doug’s wedding take place?

Thank you for this timely advice, Marilyn. These are useful tips even for authors who are mostly fledged!

Thanks, Jaden. Of course there's lots more--I've got over 30 books published but keep learning more.

Thanks so much Marilyn for the sage advice. Great stuff!