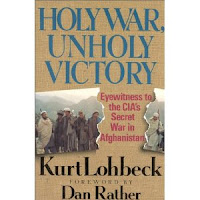 I'm reading the book, Holy War, Unholy Victory by Kurt Lohbeck with a forward by Dan Rather. As much as I can tell, the book recounts the various Afghan resistance groups efforts to drive Soviet troops from their homeland in the 1980's. It's definitely not the type of book I typically read, but in light of current events and the fact that the author is my great uncle and the subject of family lore, I thought I'd give it a try.

Despite my best efforts, after only a couple of chapters, I'm already bored with the book, which is probably more of an indictment on my intellect and lack of maturity than Kurt's writing. Be that as it may, I wish he would have written a memoir of his life instead of a book about his time in Afghanistan. From what I've heard, he was quite a character.

As far as families go, mine's fairly unremarkable. We've never held high positions in business or politics or been inducted to any halls of fame, and our crimes, while relatively frequent, always allow for probation. We're more or less a loosely knit group that's fairly content inhabiting the lower ranks of the middle class. There are worse fates to be sure.

The lone exception to our run of the mill family appears to be Kurt. When news broke that Bin Laden had been killed, I remembered that Kurt had spent a considerable amount of time working in that part of the world as a reporter. With a quick Google search, I found the book he had written as well as a wealth of information about his life.

As a young man he moved from St. Louis to New Mexico where he quickly became a character on the New Mexico political scene. In 1966 he hooked up with Dave Cargo and helped him to win the governor's seat. In the mid-seventies he served a term in the New Mexico House of Representatives. Not long after leaving the legislature he spent six months in a New Mexico prison for passing bad checks. He then went to D.C. where he worked as an aide to U.S. Representative Manuel Lujan Jr.

Kurt spent the lion's share of the eighties in Afghanistan as a reporter for CBS News. He was purported to be the only full-time U.S. correspondent on the ground in Afghanistan, and one of the few westerners to meet the infamous Osama Bin Laden. Kurt is pictured second from the right above and Bin Laden front left. By the early 1990's Kurt was back in the States and into politics working on Pat Buchanan's presidential campaign.

Kurt's entire adult career was unique. He was an Albuquerque TV and radio announcer and newsman, founded a bank, owned nightclubs and a pub, and was a professional magician who had played Vegas' showrooms. He was also intimately involved with the Cystic Fibrosis Foundation.

The lasting impression I got from my grandparents about Kurt was that he was exceptionally bright, but a shyster of the highest order who kept his friends close and his enemies even closer. I only met him once when I was a kid, so I have no opinion of my own to share. What I do know is that in my research I was sorry to learn that he had died around this time last year. I wouldn't have minded having a beer with him someday at his pub. I suspect he had a story or two worth hearing.
Posted by Shane Cashion at 9:16 AM

Your great uncle sounds like quite a fascinating rogue, Shane. Maybe you're write a book about him some day.

Shane, he does sound like an interesting fellow. Maybe he left some journals somewhere so you can read about his life.

I just heard (yesterday) from a great-uncle I'd never met, so this is another post that was quite timely for me.