It's a Dog's Life

Trillian came to live with me about 18 months ago, after a short but unhappy stay at the county shelter and an unknown but almost certainly unhappy earlier life. 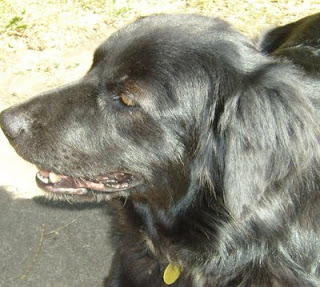 The one thing that could be said for certain was that she was terrified of getting into a car. The shelter boss and I only managed to get her into mine to come home with me by pulling and pushing respectively. After that inauspicious beginning, it took a month of patience, bribes, and the good example of a friend's dog to make her comfortable with climbing into that scary place.

Gradually she gained confidence and started to relax. 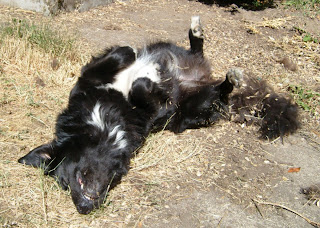 Then she would accompany me in the car on errands about town. But whenever I had to go more than a few miles, she stayed with friends, her best friend being 'Oli: 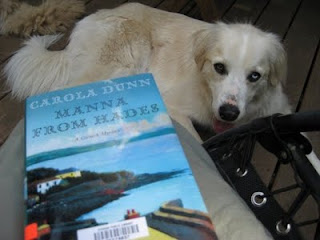 After all, he's the right colour and size for a sheep, more or less. She loves to herd him--and if he doesn't feel like running, she urges him on with nips to the heels. She has the herder genes all right! 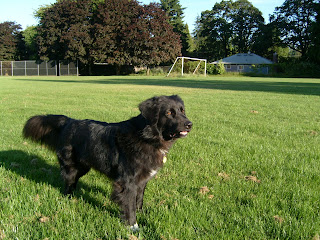 In April, her horizons expanded drastically. She came with me the length of Interstate 5, all the way south to San Diego and north to Seattle. She was patience itself as we drove mile after mile of highway. It helped, no doubt, that the rest areas were full of new and intriguing doggy-smells.

On the way south, she was invited into Book'Em Mysteries in South Pasadena and Mystery Ink in Huntington Beach. For a dog who's always been a bit nervous of people she doesn't know, she behaved amazingly well, first insisting on a bit of exploration, then settling down and even allowing a chose few to pet her.

We stopped at my son's in San Diego County. Trillian was not accustomed to close contact with either cats or small children, but she took to my grandkids very quickly, thank goodness, and didn't chase the cats, especially the one that sat and glared at her when she came anywhere near. She liked my daughter-in-law, but never warmed to my son--he's large and male and used noisy power-tools a lot. She did like his "garden art," though: 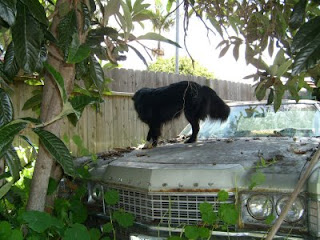 After a signing in San Diego, we turned around and drove home again. A couple of weeks later, we were off to Washington state, where she charmed my agent, her husband and her dog, and came with me to Seattle Mystery Bookshop. After that came the biggest adventure, the car ferry across the Puget Sound. Trillian had to stay shut in the car, with all the mysterious noises and motion that go with a boat ride. It didn't seem to bother her in the least.

She had her reward. The friends we stayed with in Port Orchard have a fenced yard full of squirrels and the smell of raccoons, and a fish-pond to fall in, and woods to explore. All went well until we were about to leave, when she jumped into the car and I turned to say goodbye--and realized I'd locked her in with my keys, in the sun, windows closed except one half-inch crack. Panic panic (that was me, not Trill, who took everything very calmly). Two neighbour boys somehow managed to combine a couple of wire coathangers into an implement with which they hooked my bag from the far side of the car and hooked my keys through the crack.

Trillian didn't stir, nor made a sound. I've revised my opinion of her as a guard dog...

She is now a veteran of 4 book signings. Here she is at Mysterious Galaxy in San Diego. 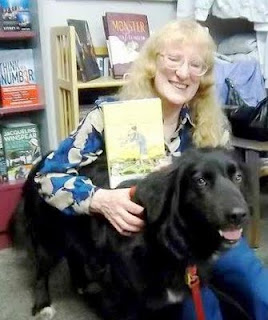 I'm sorry that I missed your tour while I was in California earlier this month. My Australian Shepherd Miriah and Trillian could have herded each other aruond. :)

That would have been fun!

Carola, she is beautiful. I love her name too!

Her name comes from the Hitchhikers Guide to the Galaxy. I'd just reread it when we found each other.