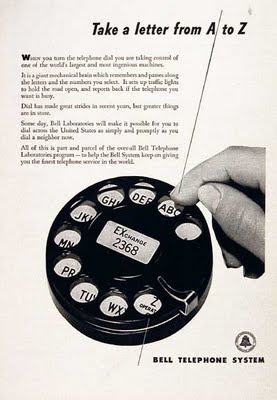 It’s hard to believe, but at least two generations have no idea what a rotary phone is. It was a simple communicating device. Just ten digits on a round dial. Stick your finger into the numbered slot, spin it until it stopped, and it dialed as it unwound. The 1946 Bell Telephone ad pictured above reads, “Some day, Bell Laboratories will make it possible for you to dial across the United States as simply and promptly as you dial a neighbor now.” Imagine that. But as late as 1971, I shared a phone line in Greeley, Colorado. They called it a “party line”, though I never heard one when I picked up the line. If a neighbor was talking on the line, I hung up and waited until they were finished. If something was pressing, I could ask that they end their call so I could use the phone, but nothing short of an emergency was so important it couldn’t wait.
But technology changed everything in just a few decades. Music went from LP albums to 8-Track players to Cassette players to CDs to iPods and iPads that sync with our car’s radio. Telephones went from hardwire pulse-dial to digital-dial to portable phones to pagers to car phones to cell phones to smart phones that let you talk while surfing the Internet. Will this rush in technology ever end? With ongoing research on digital information implants and pilotless aircraft, it’s quite possible there is a Terminator in our future.
Technology has also changed how we obtain news. For centuries, newspapers were the sole source of information. Back then, newspaper accounts were highly respected because they were heavily scrutinized by editors who demanded accuracy. Once news became instantaneous with the Internet and 24/7 news channels, quality reporting diminished. Newscasters soon found that retractions were easier than accurate reporting. Blame it on their producers who are so eager to find the next greatest story, ongoing stories such as the Gulf oil spill recovery, Japan’s March 11, 2011, nuclear power plant disaster, or the recent weather related destruction in the Southern United States are soon forgotten.
While on-line banking and e-trading revolutionized the speed of commerce, our electronic leashes now hold us captive. Like Pavlov’s dog, we salivate whenever the phone rings, and regardless of who is currently on the line, we ask that person to pause while we take the next call or answer a text. Somewhere along the line, we surrendered our freedom to employers who expect instant responses. Sadly, the tools intended to simplify our lives complicated them.
Authors are among the fortunate few who can use technology to create worlds without it. In the fictional world, no one rushes to answer phones or risks colliding with other cars while texting or talking on the phone. If someone is talking on the line, our characters on the other end will hear a busy signal. There is no option to press 1 for English or to leave a message. Yet in the real world, these authors can use instant information sources such as the Internet and satellite imagery to create accurate stories and scenes. Some authors like Michael Crichton and Dean Koontz illustrated life with and without technology in their respective novels, Timeline and Lightning. Both books became instant successes.
We can’t stop technology, but we can choose how we use it in our daily lives. At the same time, authors can choose how their characters will use this technology to their advantage. If you are writing a period novel, it is essential that you keep the technology period-correct. For example, a character in the 1980s wouldn’t know what a laptop or cell phone is. To them, Gateway is an entry point, and Dell is a valley. In the 80’s, phone booths had rotary-dial phones, and Collect Calls were an accepted form of communicating. Perhaps it’s time we re-wind the clocks and slowed our pace. At the rate we’re going, technology may be the death of us all.
Posted by Mark W. Danielson at 12:01 AM

I witnessed the growth of technology as a young news reporter when we were still using typewriters to report the news and three sources of information were required before we wrote a news article. Electric typewriters replaced the manuals before video display terminals came into use. A lot of changes have since taken place, most of it detrimental.

Jean, I love that song.

Mark, you're right. The rate of technological advancement is dizzying. And speaking of Terminators, 2011 is the year Skynet supposedly becomes self-aware and takes over the world. It was supposed to be in April, though, so I guess Sarah and John really did change history--at least for the moment. :o)

Jean, I still have my dad's 1947 typewriter. I keep it to remind me of what a chore it was to crank out good work. Technology is great until it messes up, like Google's blog did this week.

Beth, not sure if computers are ready to take over the world yet, but we're definitely heading in that direction. Kind of scary when you think about it.