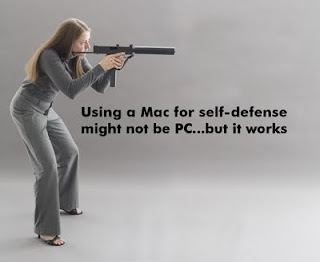 As someone who recently bit the Apple, the only bitterness I've found to that sweet juice has been the realization that I do not own Apple stock and at these prices cannot afford to buy Apple stock.

Seriously, over time, I've tired of Microsoft's domination of the PC marketplace. I stopped using Internet Explorer years ago because there were better browsers. But operating systems? I know nothing about computer operating systems, except what I've learned from my Microsoft frustrations. But I know the effects of domination: I'm an antitrust lawyer. Domination kills innovation and customer service and raises prices. Look at Microsoft: You pay for their constant upgrades; you learn that some of its own programs don't play well together; you wade through unhelpful Help suggestions; you get blue screens of death; you get "fixes" every Tuesday; you must move your data back and forth just so you don't lose it next time you upgrade to the next OS upgrade; you get malware and bugs, and you must wrestle with Symantec, McAfee or some other anti-virus program that often doesn't work.

I'm sure you can add to my litany of complaints, but that's not the point. Yes, I finally made the switch -- or am working at it -- to Apple, picking up one of the new MacBook Pros with Retina Display and planning on an iPhone when the new model pops out.

And I'm amazed once more at Steve Job's genius, the intuitive programs and actions, the lack of a need for an antivirus program and the seamless way Apple programs work together. I should have made this transition years ago. And learning curve? What learning curve? One half hour lesson at the Apple Store, and I haven't been back.

See, even a dummy can make the transition.

But this purchase has also peaked my interest in the lawsuits Apple's been filing and the results they've recently been getting from them. I am a retired lawyer after all, one who has litigated patent claims. So I know the territory, even if I haven't studied the patent claims in the Apple vs. Samsung litigation.

No question, this was a big week for Apple. The Samsung jury verdict was a Google alarm of the first order, and of course not so good for Samsung. For those who didn't notice, Apple won a verdict of over a billion dollars from Samsung last week, one that's likely to be trebled before attorney fees and costs (expected to be in the millions) are also levied. And yes, Apple is attempting to block Samsung's ability to sell some of its phone models in the U.S.

There are several aspects to the Samsung cases -- there are two -- that particularly interest me. First, the fact that the jury verdict validated Apple's patents. That's now a matter of law; those patents can be enforced. And that's big trouble for anyone else who was thinking of challenging them. Granted, the Court of Appeals for the Federal Circuit, the appellate court which hears patent case appeals, could modify or even reverse this verdict, but this was not a normal jury. The jury was drawn from technically savvy San Jose, and the jury apparently understood its job and the patent claims involved. They studied them and reached an informed decision. I expect the decision will hold.

Second, the real target in this lawsuit was Google, who was not even a party. Brilliant action to sue the device maker for selling technology that violates your patents, not the designer of the operating system itself. Which sends a strong message to all manufacturers of devices running Google's Android system: Go ahead: Make your Android phones, and we'll sue you for your profits, our lost profits and we'll block your future sales.

So sure, Samsung can design around Apple patents, perhaps, somehow change the "Pinch", for instance, to some other form of finger move, but that's extra engineering work of extraordinary complexity and expense. Plus, there may be other patents out there you might infringe.

As I was reading about this over the course of the last few days, I wondered when Apple and Google would hold settlement meetings, because again, even though this enforcement action was against Samsung, the clear message is Apple is gunning for Google, and since Google is soon coming out with its own phone, which itself may infringe Apple's patents, the time is now to meet and attempt to negotiate cross-license or license terms. These negotiations will be difficult and long, but they must occur. You don't see GE and United Technologies suing each other in court over aircraft engine patents, do you? They cross-license each other. But Google and Apple, just because of their age and growth cannot yet be considered mature companies. It takes a while before the light comes on sometimes with companies who haven't been around long. Google and Apple will get there, but I would not expect an agreement any time soon, unless it's a limited one.

And in the meantime, Microsoft's considering its own entry into the tablet and phone market. But because Microsoft approaches most things differently from Apple, I wouldn't expect too much dithering between Apple and Big M. I think those problems were ironed out years ago.

But another thing struck me about this week's results. Not long ago, I read an article critical of Apple for having filed these suits. The reasoning behind this critique was that Steve Jobs was away from Apple for many years. The author claimed electronic technology took huge jumps during that period. He argued that Jobs may not have been aware of all the developments and may have attributed more value to Apple's patents than they were worth.

But ask Samsung. This verdict, a ban from markets and consequential redesign efforts will cost Samsung billions of dollars. And while the impact on Samsung's current product lineup may not be so severe, this lawsuit will eventually be settled, and Samsung can be expected to pay somewhere between $5-30 per unit sold or to be sold. But even a $5 royalty on all Samsung phones sold would cost Samsung tens of billions of dollars over the years. And raise the cost of Samsung devices.

Needless to say, device makers are going to be besieging Google to settle with Apple. They don't want to end up exposed like Samsung. And, depending upon their agreements, Google may face some exposure from Samsung, for instance to indemnify and hold Samsung harmless from patent infringement claims arising from operating system technology.

So, in a few words, Apple didn't have to sue Google directly to drive Google to the settlement table. Instead, they sued a device maker who based its system on Google technology.

And that explains why Google initiated settlement discussions with Apple within a few days of the verdict.

Smart article, Ben. The iPad is what continues to amaze me. Nothing beats it for its airplane applications. Literally everything I need comes in one small electronic pad. No doubt Apple will dominate the technology market -- especially with their new corporate subsidies.