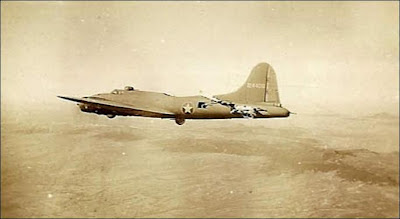 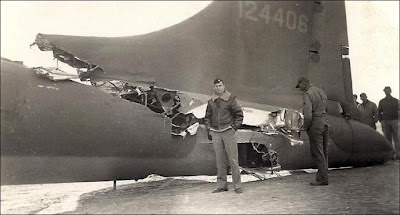 This is not an article I wrote, but rather one I felt was worth sharing.  As a kid, I never missed an episode of Twelve O’Clock High – the World War II series based upon the B-17 movie of the same name.  I loved the Flying Fortress, and frequently flipped through the pages of my book of the same name.  In this book, I remember seeing an amazing photo of this B-17 that was torn in half by a German fighter, but I never knew the full story until this article was passed on to me.  I cleaned it up slightly, but full credit goes to the unknown crewmember that wrote the article.  I hope you find it equally fascinating.  I salute every airman of WWII.

A mid-air collision on February 1, 1943, between a B-17 and a German fighter over the Tunis dock area resulted in one of the most famous photographs of World War II.  It was there that an enemy fighter attacking a 97th Bomb Group formation went out of control, probably with a wounded pilot, and crashed into the rear of the fuselage of a Fortress named All American, piloted by Lt. Kendrick R. Bragg of the 414th Bomb Squadron.  When it struck, the fighter broke apart, but left some pieces in the B-17.  The left horizontal stabilizer of the Fortress and left elevator were completely torn away.  The two right engines were out and one on the left had a serious oil pump leak. The vertical fin and rudder had both been damaged, the fuselage, which had nearly been cut completely through, was connected only at two small parts of the airframe.  The radios, electrical and oxygen systems were also damaged.  The hole in the top of the fuselage stretched 16 feet to the top gunner’s turret, and was four feet wide at one point.

Although the tail bounced and swayed and the fuselage twisted when the plane turned, it miraculously flew on only one surviving elevator cable.  The tail gunner remained at his station as there was no floor to get back to the main fuselage.  While the plane lumbered on, the waist and tail gunners used parts of the German fighter and their own parachute harnesses to lash the tail and fuselage halves together while the pilots coaxed All American to her target.

When the bomb bay doors opened, the inside wind force was so great it blew one of the waist gunners into the broken tail section.  In several heart-stopping minutes, four crew members were able to pass parachute ropes to him and haul him forward.  When they tried doing the same for the tail gunner, the tail began flapping hard.  Figuring that the gunner’s weight was adding stability, he quickly returned to his position.

Because their one hundred eighty degree turn had to be very gentle, they covered almost 70 miles before they were heading home.  Even worse, their B-17 was so badly damaged that it kept losing altitude and speed.  Soon, they were alone and easy prey for two more Me-109s.  Refusing to go down without a fight, All American’s crew responded with guns blazing, the waist gunners with their heads through the hole in the fuselage, and the tail gunner’s recoil turning the airplane.  Thankfully, the fighters retreated without instilling further damage.

Allied P-51 fighters intercepted All American as she crossed the English Channel, snapped this inflight photo, and then radioed to base that the bomber’s empennage was waving like a fish tail, that the plane would not make it back, and to send rescue boats to retrieve the crew when they bailed out.  But Lt. Bragg quickly signaled that bailing out was not as option as they had used six parachutes to keep the plane together.  Earlier, the crew decided that if they could not all bail out safely, then they would stay with the plane and attempt a landing.  The Mustang pilots could only watch in amazement.

Two and a half hours after her mid-air, All American made her final turn to line up with the runway that was still 40 miles away.  Remarkably, she held together and rolled out on her landing gear.  When the ambulance pulled alongside, it was waved off because not one crewmember had been injured.  As people swarmed around the aircraft, no one could believe All American made it home.  She could have given up, but instead sat placidly while the crew exited through the fuselage door and the tail gunner climbed down a ladder.  Soon after, her aft section collapsed as if she knew she had done her job. 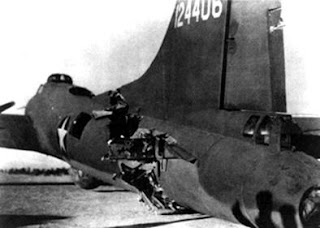 I love stories about America 's past.......pass this on to someone you know will appreciate this story.

Wow! What a miraculous story, Mark. Thanks for sharing it.

Thanks, Jean. Here's another amazing B-17 story. Charlie Brown [real name] was a B-17 Flying Fortress pilot with the 379th Bomber Group at Kimbolton, England .... His B-17 was called 'Ye Old Pub' and was in a terrible state, having been hit by flak and fighters. Its compass was damaged and they were flying deeper over enemy territory instead of heading home to Kimbolton. When they inadvertently flew over an enemy airfield, a German pilot named Franz Steigler was ordered to take off and shoot it down. When Steigler got airborne and closed on the B-17, he had never seen a plane in such a bad state. The tail and rear section was severely damaged, and the tail gunner wounded. The top gunner was dead, with his remains spread all over the top of the fuselage. The nose of the plane was smashed and there were holes everywhere. Despite having ammunition, Franz flew along side the B-17 and looked at Charlie Brown, its pilot. Brown was scared, as he struggling to control his damaged and bloodstained plane. Aware that Brown had no idea where he was headed, Franz signaled for him to turn 180 degrees. Franz then escorted and guided the stricken plane to, and slightly over, the North Sea toward England. He then saluted Charlie Brown, banked his fighter, and returned to his base.

When Franz landed, he reported that the B-17 had been shot down over the sea, but Charlie Brown and his surviving crew members on the other hand, told all at their debriefing, but were ordered never to talk about it.

More than 40 years later, Brown wanted to find the Luftwaffe pilot who saved the crew. After years of research, Franz was located. Remarkably, Franz had never discussed the incident even at post-war reunions.

The two pilots met in the USA at a 379th Bomber Group reunion along with 25 people who were alive and subsequently born because Franz never fired his guns that day.

When asked why he didn't shoot them down, Steigler said, "I didn't have the heart to finish those brave men. I flew beside them for a long time. They were trying desperately to get home and I was going to let them do that. I could not have shot at them. It would have been the same as shooting at a man in a parachute."

What a great, heartwarming story, Mark! There must have been other such incidents that we'll never know about.

Sometimes war, or at least defined wars, bring out extraordinary acts of kindness and mercy.