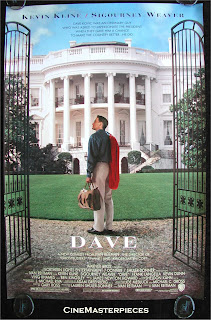 The movie Dave is one of the most brilliant political comedies ever made.  In the movie, presidential look-alike Kevin Kline steps into the US President’s role in order to keep the chief executive’s ailment a secret.  While acting as president, Kline manages to solve nearly all of the United States’ problems in minutes at a Cabinet meeting.  Sadly, our political system prevents such progress.

I don’t care much for politics, but I am constantly amazed at how We the People manage to bury our heads in the sand, hoping that those we have elected will somehow muddle through the messes we have created in order to form a more perfect union.  We do this repeatedly with little accountability, choosing instead to blame the politicians we chose to represent us.

We, as a nation, face many issues, and most agree that our economy tops the list.  Of course, few would admit that we are to blame, but America’s thirst for cheap products has sent too many jobs overseas.  Walmart, which had originally billed itself as a company that brought cheap prices to small towns with American-made products, now carries nearly all foreign-made products.  But don’t blame Walmart.  Like our elected officials, it couldn’t survive without our support.

In the current bid for president, neither candidate is addressing the war, even though this war is the principle drain on our economy.  And in spite of our attempts to buy loyalty from other nations, like the Beatles said, money can’t buy you love.  So why not save lives and money by pulling out of the Middle East and let our returning troops re-build their own country while serving out their military commitments?  I feel certain that Dave would have said that.

A recent Wall Street Journal article by George Schultz who is a former Secretary of State, Secretary of Labor, and longtime thinker on national issues, along with four other men from Stanford’s Hoover Institution listed significant events in the past four years resulting from Federal Reserve Board decisions.  According to this article, in each of the past four years the Federal government has gone over budget by more than a trillion dollars:  1.4 in 2009, 1.3 in 2010, 1.3 in 2011, and 1.2 trillion and growing in 2012.  As a result, our federal debt to GDP ratio has risen from 40% to 80%.  And since Americans and foreign governments aren't buying many federal bonds these days, the Fed has been using Federal Reserve money to purchase huge amounts of US Bonds.  The end result is We the People now own one dollar in six of our national debt because the Fed prints the money and then uses it to buy new bonds that we owe to ourselves.  In the last federal fiscal year, approximately 75% of our deficit was financed by the Federal Reserve, raising our debt ratio even higher than that of Greece.  If Dave was president, we wouldn’t be facing these issues.

We are all accountable for the decisions our lawmakers and money managers make.  If we don’t like what’s going on, then we have an obligation to speak up to promote change.  As the saying goes, if you’re not part of the solution, you’re part of the problem.  Dave would agree with that one, too.
Posted by Mark W. Danielson at 12:00 AM