Republished – Blood of the Wicked

I hope you’re a regular visitor to Murderous Musings.
If you are, you’ve probably learned, by now, that I live in Brazil and write all my posts about that country.
But here’s something you might not know:

I also write police procedurals that feature the exploits of a tight-knit group of Brazilian federal cops.
Never given one a try?
Good. Read on for a deal that might interest you.

On the 4th of September, Soho Crime will republish Blood of the Wicked, the first-in-series, as a low-priced trade paperback.
Here’s what it looks like: 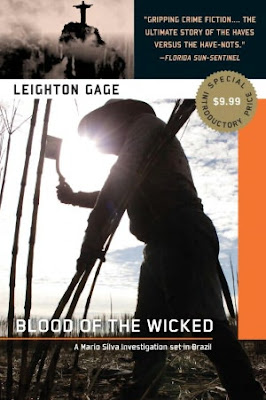 Blood of the Wicked is grittier than the books that followed, but it remains the one newcomers should tackle first.

In a recent review, commenting on all of my currently published books, the Wall Street Journal opined that they have “all the step-by-step excitement of a world-class procedural series”.
The New York Times called Blood of the Wicked “top-notch” and “entirely absorbing”.
Library Journal gave it a star.
The Boston Globe found it “compelling”.
The Toronto Globe and Mail referred to it as “masterful”.
And Booklist, in another starred review, called my Chief Inspector Silva “South America’s Kurt Wallander”.

Barnes and Noble, my publisher tells me, has ordered in a substantial amount.
So you'll be able to find it there -- as well as at your favorite independent bookseller. (Always my first choice. The service they do for readers and authors is immeasurable, and we all have an interest in keeping them alive.)

Here’s the link on Amazon: http://tinyurl.com/9fnn7xs

If you take the time to go there, and I hope you will, please be sure to check out some of the worst reviews.
Some are quite funny – and, for my money, say more about the reviewers who wrote them than they do about the quality of the book.