Parents who struggle to find that just right name for their baby have something in common with writers. The difference is that writers have to choose both first and last names for their myriad of fictional children. Sometimes this naming process becomes vexing. (Forgive me if my words seem to slip into an earlier period in history. I sometimes write romantic mysteries set in the 1890’s.)


Different names are popular at different periods in time. (If anyone understands why this happens, please let me know.) For instance, when my oldest daughter was naming her baby, she and husband Rick settled on the name, Lauren. This moniker seemed to jump right out at us from the pages of the baby book, and none of us knew a Lauren at that time. But as if by magic (or universal thought or whatever), when our Lauren went to pre-school, her class was over-populated with Laurens.


Because of this phenomenon, the age of a character must be considered when choosing a name. It wouldn’t do to name a 65-year-old woman, Tiffany. If this character is a bit ditzy, or earthy, or funny, she could be named Lizzy; if she is serious minded, Elizabeth or Beth, would be better.


Character names can even influence the progress of an author’s novel. Sometimes names spring to mind easily, as if arising from ether. The name fits so well that the character seems to develop with little help from the writer. This is one of the mysteries and of the magic of writing.


At other times, even though you see the character clearly in your imagination—no name seems to suit. In desperation you pick a ‘do-for’ name, knowing that appellation will annoy both you and your character. This inappropriate name can even taint your story. It’s as if the character is pouting until you can do better.


Such a dilemma happened to me with novella, titled THE GHOST WHO WOULDN’T SKEDDADLE. (Published in the anthology THE FOXY HENS GO BUMP IN THE NIGHT.) I needed a name for a character who gambled. First I called him Gregory, which was soooo wrong. I did a search and find and changed him to, “Mr. Card Sharp.” Neither he nor I minded this change, while I looked through baby name books, the phone book, and the credit lines of movies. Finally I settled on Slick O’Reilly, which worked. It’s important to find that just right name.


I can remember wrong-sounding character names in books I have read. In The Thorn Birds by Coleen McCullough, the male character’s first name was Ralph. He was a handsome priest drawn into forbidden love. (What a wonderful premise—I love unrequited love. But Ralph?) This name never worked for me and I couldn’t understand such a name was chosen.


In Breakfast at Tiffany’s, a novella by Truman Capote, whose main character was first named Lulamae Barnes. A pretty good name for this character, but yet not quite right. (Capote was a perfectionist.) Her final name was Holiday (“Holly”) Golightly. This was a perfect name for the character later played by Audrey Hepburn in the movie classic. I’m so glad it was changed.


In my mystery THE INCONVENIENT CORPSE, I first named my protagonist, Gage Cassidy, and then later changed it to Grace Cassidy, which seemed to suit the character better. 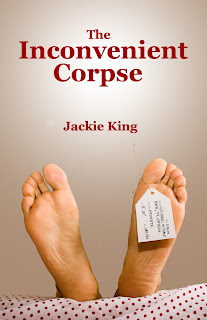 http://amzn.to/gMv7CH
If you’re curious about how this story goes, here’s the first paragraph:


“Grace Cassidy stared at the stranger’s body. He was about sixty, pot-bellied, naked, and very dead. She knew he was dead because his skin was the color of concrete. Worst of all, he was lying smack dab in the middle of her bed.”

Thanks to everyone who stopped by. Check me out on my website:
www.jacqking.com


I’m also on Facebook under Jacqueline King and I’d love it if you friended me.