The misadventures of Flat Stanley

Do you know Flat Stanley? It's a kids' picture book about a small boy who's flattened paper-thin in an accident but continues to live with his family and have adventures. Among them is taking a trip in an envelope through the mail.

Many teachers in more than one country have used Flat Stanley as the basis for lessons. A good few years ago, a friend in England sent me her grandson's Flat Stanley--a paper figure cut out and coloured--and asked me to take a picture of him with something distinctively Oregonian. I can't remember what I chose, but I recall sending him on to Australia, and never hearing of his eventual fate.

Last week, my own grandson's Flat Stanley arrived in the mail. I tried to think of somewhere to photograph him that would show the word Oregon. All I could think of in the immediate neighbourhood was the Oregon Community Credit Union. So off we went: 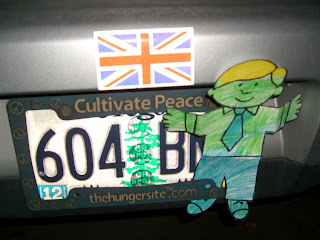 Though I didn't actually make him travel on the rear bumper.

When we got there, the only place I could see the word was on the glass door--difficult to photograph. So I took him inside. A bemused but helpful teller gazed around the lobby but the only thing he could find was the manager's University of Oregon tea mug! So here's Stanley having a swig. 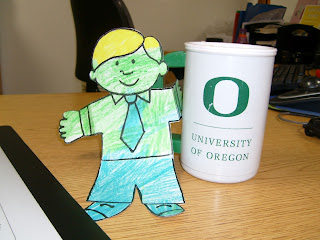 Home we went, and out into the garden. My grandson lives in Southern California, where rhododendrons don't grow well, so I decided to perch him in my favourite glorious specimen: 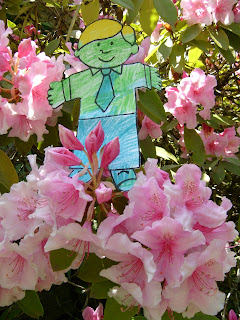 Not good enough <sigh>. I needed to look farther. Then I remembered the statue downtown of Ken Kesey, author (One Flew over the Cuckoo's Nest) and local celebrity, who sits forever reading to his kids in Willamette Plaza. A young couple was sitting between him and his kids, but they kindly moved out of our way. I couldn't fit the children in... 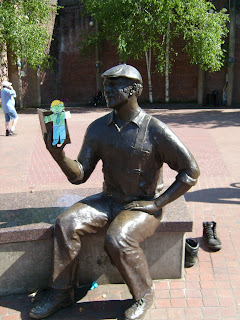 ...and I don't know to whom belonged the extra pair of boots!

Next we went off to the library to find Eugene Skinner, pioneer and founder of Eugene City, once known as Skinner's Mudhole. He sat there stoically while I photographed Stanley on his arm. 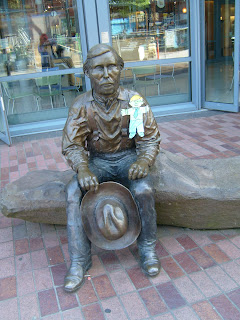 Lastly, we went into the library, where a carved wooden plaque symbolizing Oregon caught Stanley's eye: 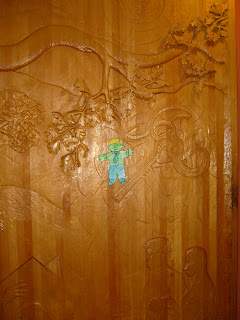 Then back home... and it wasn't till I went to put him back in his envelope next day that I realized he hadn't come with me. Searched everywhere. Had he flown out of the car window? Kidnapped?

In the end, I called the children's librarian, explained, and asked if she'd mind running down to the basement car park to check whether Stanley had spent the night there, stuck to the plaque.

He had. I dashed off to retrieve the rascal. He's now safely sealed in his envelope waiting to be mailed back to my grandson.
Posted by Carola Dunn at 12:30 AM

I love it, Carola. What a great story.

Flat Stanley took a 'round the world trip with me a few years back. He sent post cards from everywhere and experienced a lot of things. In the end, he confirmed that while he was still flat, the rest of the world wasn't.

So glad Flat Stanley was found on the plaque and was sent off safely on his next adventure! Great story, Carola.