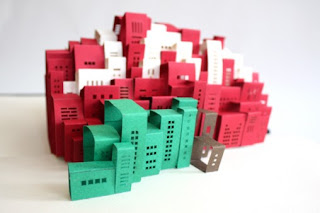 From thirty-five thousand feet, farmed fields become tapestries, cars move like ants. At night, Australian outback fires and Japanese fishing fleets look like cities, the aurora borealis dance, and constellations blend into the Milky Way. Up here, political borders are recognized only by their airspace restrictions.  Lego cities abound. I call them Lego cities because from my vantage they resemble stacked blocks. You can find high rise cities throughout Europe and Asia, but in the more remote areas of Russia, Kazakhstan, and China, the outline of some these industrial cities resemble Medieval walled cities.

Many cringe at mass housing developments, but high rise cities are actually quite efficient. Their concept dates back hundreds of years when walled cities protected citizens and used the surrounding land for farming. Modern adaptations of this lower energy costs, require less infrastructure, and minimize commutes because people are closer to their work place. A side benefit may be a greater sense of community. No doubt Lego cities would cease to exist if they didn’t work.

Of course, the US has cities that fit this description. Manhattan certainly qualifies, and Boston’s row houses precede The Revolutionary War.  Mass housing works well in these cities because both encourage inner city living with convenient transportation, and nearby theaters, restaurants, and corner markets. The demand for inner city living has spread to many others cities, which has led to redeveloping abandoned warehouses as loft housing. Younger people crave these apartments not only because of their convenience, but because downtowns have become such happening places. What a great way to preserve historic buildings. 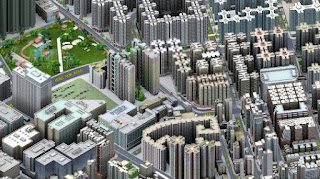 In many cases, cities must go vertical development because there is no more available land. An island city such as Hong Kong (pictured above) is a prime example. Of course, this would apply anywhere that topography limits development. Paris is among those cities that perfected mass housing centuries ago and has minimally strayed from that course. Their concept of standard height courthouse buildings set the bar for beautiful architecture while remaining functional. High rise apartments may not suit everyone, but they can certainly be a model of efficiency.


No doubt more cities will go vertical because there is no room left to expand, but the amenities in these communities rival some resorts. Next time you’re surrounded by high rises, sit down and take note of how this microcosm functions. It might be helpful if you’re writing an inner city story.

Fascinating blog, Mark. I envy you the experiences you describe in your opening paragraph and your comments on vertical developments are thought-provoking. I happen to love Paris, so I appreciate what you say about its buildings (and it is a place, unlike London, which has residents in all its districts). The easy condemnation many make of high rise accommodation needs tempering with the benefits you mention.

Thanks, Bill. Paris is certainly among my favorite cities, and I am fascinated with its architecture. It never would have survived WWII had it not been for its immense beauty. Sadly, modern architecture is a far cry from what was built in the 16th and 17th centuries.

Mark, I don't fly often, but when I do, I'm always intrigued by the patterns of the various cities from above. Especially at night. Baltimore and Washington look like grids, but Nashville looks like someone has tossed a handful of stars across the earth. Just beautiful.

Night flying always reminds me of the Peter Pan ride at Disneyland. Rivers, lakes, and shorelines are easy to spot in populated areas because of their outlines. Mountains can be equally easy to make out because of their darkness. In many cases, you see much more at night because light penetrates smog.