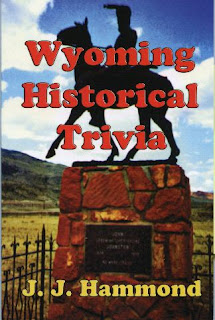 I recently edited an unusual book, Wyoming Historical Trivia by J. J. Hammond, which contains some interesting, disturbing and amusing facts about Wyoming, including the state's many "firsts".

Which state first gave women the right to vote?

A bill granting Wyoming women the right to vote was signed into law by John Campbell, first territorial governor or December 10, 1869, but it was a Utah woman who cast the first vote on February 14, 1870. The Utah Territorial Legislature had passed its suffrage law four days earlier. Wyoming women didn’t vote until August of that year, but they, unlike Utah women, were allowed to hold public office.

Who was this nation’s first woman bailiff?

Mary Atkinson of Albany County, Wyoming, was appointed to her job in 1870, as was Esther Hobart Morris, this nation’s first woman justice of the peace.

When did the first all-women jury serve?

Which Wyoming town was governed entirely by women?

Jackson was governed from 1920-1921 entirely by women. Grace Miller was elected mayor and Rose Crabtree defeated her husband, Henry, the former mayor, for a city council seat. The all-women council also approved the election of Pearl Williams as town marshal and Edna Huff as the Jackson health officer, among others.

Who was Wyoming’s first woman doctor?

Lillian Heath Nelson was one of three doctors in 1881 to perform an autopsy on outlaw George Manuse, aka “Big Nose George” Parrott. The autopsy was performed by removing the top of the outlaw’s skull to determine any criminal abnormalities. None apparently was found. Nelson reportedly dressed like a man and wore pistols strapped to her hips while studying obstetrics with a Wyoming doctor. (I’m not making this up.)

Who had shoes made from Big Nose George’s hide?

Dr. J. E. Osborne, who performed the outlaw’s autopsy, had shoes and a medical bag crafted from” Big Nose” George’s hide. The doctor, who became Wyoming’s governor (1893-95) is said to have worn the shoes while holding office. The shoes and George’s skull are on display at the Carbon County Museum. (I believe that’s another first, and hopefully the only time it happened.)

And last but certainly not least, the first woman governor, Nellie Tayloe Ross, was elected in 1925 and was later appointed by FDR to head the U.S. Mint, a position she held until 1953.

Wyoming Historical Trivia is on sale for 99 cents on Kindle and Nook and will be available in print before Christmas.
Posted by Jean Henry Mead at 12:02 AM

I guess the judge didn't care much for Big Nose George. Either that or he was so fond of him that he always wanted him around. I'd never heard that one before.

The story's fairly well known here in Wyoming, Mark. The townspeople were so enraged that they hanged George Manuse from a telephone pole and then turned his body over to the doctors. What I can't imagine is wearing shoes made from his skin, especially while serving as governor.

I suppose it was something like a mosse-head hanging on the wall: "Look what I caught. This is what happens to outlaws around here."