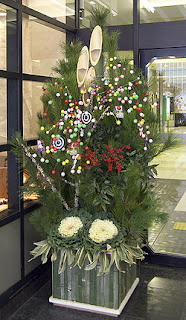 Among New Year's celebrations around the world, the Japanese shōgatsu is one of the longest in duration. The New Year is celebrated on January 1, but the holiday continues well into January. Just as we prepare for Christmas and Thanksgiving, the Japanese take their holiday preparations seriously, especially New Year's Eve, which is known as Omisoka.

Buddhist temples around the country ring their bells a total of 108 times on New Year’s Eve to symbolize the 108 human sins and to rid themselves of the 108 worldly desires. A major attraction is “The Watched Night Bell” in Tokyo, which is reminiscent of the Times Square ball drop. The Japanese believe that the ringing of bells can rid them of their sins of the previous year. After the bells stop ringing, they celebrate and feast on soba noodles.

The New Year season is also celebrated with a special selection of food called osechirvori, or osechi, which consists of boiled seaweed, fish cakes, chesnuts, sweet potatoes, burdock roots and sweetened black soybeans. Another popular dish is ozoni, a mocha rice cake, which is often eaten with sushi and later a seven herb rice soup that is prepared on Jimijitsu, the seventh day of January.

Japanese post offices are their busiest during the end of December and beginning of January, due to the country’s custom of sending postcards called nengjo. Like our oun custom of sending Christmas cards, the postcards are delivered on New Year’s Day. However, the cards are not sent if someone in the family has died during the year. Instead, a simple postcard called mochyyn hgaski is sent to friends and relatives. 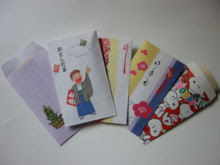 Children are customarily given money on New Year’s Day, which is handed out in small decorated envelopes called pochibukuro, which are similar to the Chinese red envelopes and the Scottish handsel. The custom, called otoshidama, began during the Edo period when large stores and wealthy families gave children small bags of mochi, a boiled, sticky rice cake topped with a a slice of Mandarin orange. The amount of money they receive depends on the child’s age but has been known to exceed $120 U.S.

The custom of giving mochi is a dangerous one because it has caused a number of chocking deaths, especially in the elderly. The death toll from eating mochi is reported annually in newspapers following the New Year, yet the custom continues.

Games are also part of the New Year’s celebration, including kite flying, or hanetsuki, and a game called sugoaroku, fukunwarai, which resembles our “Pin the Tail on the Donkey,” using paper facial parts to tack blindfolded to a wall. Other entertainment includes TV programming, which pits members of two teams of popular music artists against each other.

Another Japanese New Year's tradition is poetry, including haiku, a 17 syllable verse, as well as renga, or linked poetry. Some haiku celebrates a number of “firsts” for the New Year, including the first sunrise, first laughter and first dream. And before sunrise on January 1, people often climb a mountain or drive to the coast to watch the first sunrise of the new year while others visit a shrine after midnight.

Beethoven’s Ninth Symphony is played throughout Japan during the New Year’s season, often accompanied by a chorus. The symphony was introduced by German prisoners of war during World War 1, and was first played by the renowned NHK Symphony Orchestra in 1925. The Imperial government encouraged performances of the symphony during the Second World War, especially on New Year’s Eve, to promote Japanese nationalism because, at that time, Germany was an ally. The symphony became a tradition after the war and continues to this day.

No matter how you plan to celebrate the New Year, I hope that 2012 is the happiest and most successful ever!
Posted by Jean Henry Mead at 12:01 AM

Interesting, Jean. I've been in Japan on Christmas, but not New Year's. It was interesting that those who celebrate Christmas over there do so on Christmas Eve.

I think it's an unusual custom to ring the bells 108 times to rid themselves of past sins. I would think that they sell a lot of hearing aids in Japan. :)

Jean, hope your New Year's was wonderful and that 2012 is the best yet.

Thanks for sharing the information about the Japanese New Year. I was surprised by the number of Mochi-related deaths. Somehow I never thought of sticky rice as such a hazard!

On a completely unrelated note, I applied to adopt two baby rats, and I kind of like the name Mochi for one.