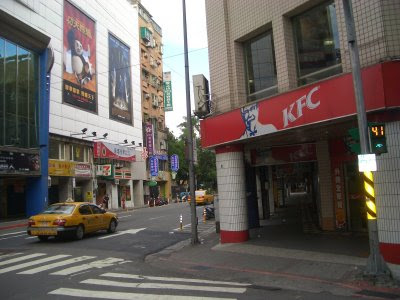 I love traveling the globe. It’s wonderful seeing the world through other people’s eyes, exploring different cultures, and experiencing new things—but there is no escaping America’s influence overseas. Working in the cargo industry as I do, it’s clear that we import more than we export. The exception to this is our exports in entertainment and fast food. In foreign cities large and small, it’s rare to escape Starbucks, McDonald's, Burger King, KFC, Pizza Hut, and Taco Bell. Coke and Pepsi are household names in any language. Movie stars appear on enormous billboards. Even Tommy Lee Jones has his face on Japanese vending machines, promoting a beverage called BOSS. Regardless of how other countries may disdain our politics, they still crave our movies, TV, music, and fast food. Some even dress to emulate their favorite stars, such as the Japanese urban cowboy I saw, boot-scooting his way through a crowded Osaka sidewalk.

Some protest that these American fast-food chains are corrupting other cultures and hurting local businesses. While this point has some credence, there is no turning back. After all, if this food wasn’t fast, cheap, and tasty, it never would have succeeded in the United States, not to mention the rest of the world. Besides, city planners had to approve each of these franchises, so don’t blame us. It’s up to them to decide how much is too much.

Disney is everywhere. Goofy, Mickey, Minnie, and Donald Duck greet visitors to Singapore’s airport, inside and out. Disney theme parks are now in Paris, Hong Kong, and Tokyo. In Osaka, the Cinderella Chapel Hotel boasts a twenty foot Cinderella statue atop the building. I also noticed Cinderella and Sleeping Beauty stickers on a strip club’s window as I walked by, though I have no idea as to their significance. Osaka also has a Vegas-style Hotel LOVE, with The Hotel Miami right next door. Curiously, neither of these hotels caters to American tourists.

American rock and roll is being played in bars and fast food joints around the world. Even my hotel in Penang had a 1960’s American music radio station. In the bigger cities, some outdoor televisions play American music videos. American TV shows and movies are dubbed in numerous languages to accommodate foreign audiences. Sadly, the few English speaking channels often broadcast our worst TV shows, such as Jerry Springer in Almaty, Kazakhstan. I’m not sure who decides what to put on the air, but clearly what is being shown does not represent the United States any more than CNN’s limited stories represent other countries. Sadly, most news stories tend to portray nations in a negative light, which means it’s up to each citizen to accentuate the positive.

My intent here is not to cause an outcry, but rather to identify our successful overseas exports. For better or worse, it’s nice to know that the United States offers the world something that makes people happy, and for that, I’m grateful. As much as it appalls me that our fast food chains are everywhere, kids around the world always smile while chomping their burgers and fries. For them, life is even better if they can eat while watching Sponge Bob Squarepants. So with that, I wish everyone a safe and Happy New Year.
Posted by Mark W. Danielson at 12:37 AM

You're right, Mark, there's no stopping it, but it is disgusting to see a McDonald's right in the middle of historic areas. Seems they're everywhere one turns.

Couldn't agree with you more, Ben.

I like your take on it, though, Mark--that at least people are getting something from us that makes them happy.

I must add that my Almaty hotel now has 17 English speaking channels; one third of which are news stations. This city of 1.5 million full of natural resources is currently a winter wonderland. While staring at the white forest, frozen in fog, it's nice to turn on the TV and watch "Underdog!" the movie.