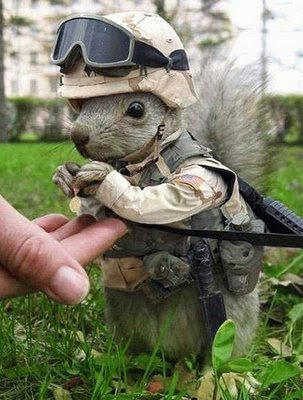 Recent changes in squirrel behavior were recently explained by the above photo, which was anonymously sent to me. Yes, this snapshot confirms that the US Army has been actively recruiting squirrels. Though this is a good temporary job for the unemployed, once they have served their military obligations, they are being randomly air-dropped into backyards across America, making these once super squirrels, an even bigger nuisance. Personally, I love these furry critters, but their inability to adjust to post-military life has been tough on all of us. So far, I’ve relocated fifteen of them, but there is at least one hold-out who is applying his military training to retain his residence of choice.

These now-mercenary squirrels gnaw at tree branches, and once they’ve gnawed completely around them, (girdled them), the branches die. The Army taught them this tactic to defoliate the enemy’s trees, thus denying them cover. Later, once the branches died, the Army hoped they would fall on the enemy, injuring them, or spooking them into running from their hiding places. This brilliant plan minimized the threat to Army soldiers and squirrels alike because the camouflaged squirrels could evacuate long gone before any tree damage was detected. Unfortunately, the Army has been ineffective at reversing their soldier squirrels’ violent tendencies before discharging them, which brings me back to my backyard problem.

Bear in mind that I own a very simple, yet well-proven squirrel trap. One end is closed, the other is open, and the bait is placed on a rocker panel. When a squirrel enters the trap and grabs the bait, it tips the rocker panel, which then slams the door shut. Afterwards, I relocate him/her to a beautiful lake park where there is a gleeful family reunion, and hopefully the transplant won’t find its way back to my yard. As I’ve said, my trap works fine on everything except Army-trained super squirrels. Unfortunately, these tough little rascals have figured out that all they need to do is push the trap over and they can claim the bait. These super squirrels are so brazen that they let me watch them do it! My counter-attack was to make a cover for the trap that prevents them from sticking their hand inside to spring it, and then baited the trap with peanut butter so there were no peanuts underneath. Sadly, that didn’t work either. Instead, Rambo Squirrel climbed over the trap, sprang it from the other side, pushed it over so the lids flew open, and was happily rewarded with chunky-style Jiffy.

My many appeals to the US Army have been in vain as they deny ever having trained any soldier squirrels. And who can blame them? To do so would jeopardize civilian as well as soldier squirrels. After all, the enemy doesn’t discriminate in such situations. So in the mean time, I must come up with other solutions. Perhaps I’ll make more modifications to my trap, or maybe I’ll set up video surveillance. But one thing is for sure; should I ever catch one of those Army squirrels and get it to talk, I will be suing the government for damages!

On a final note, I know what it’s like to be deployed overseas during the holidays. I salute every veteran, past and present, for their service, and wish them a safe return.
Posted by Mark W. Danielson at 11:02 AM

God must love squirrels -- he made so many of them. My apartment block has a yard full of the chunky-cheeked little rascals.

I avoid them like the plague -- just in case that's what they might be carrying -- but the kids love to watch them.

Weatherwise, we're in the Deep Freeze here in Oklahoma, so I hope the squirrels stored up plenty of nuts and berries, or breadcrumbs, or whatever they found to eat during the summer and fall.

I think the deep freeze has spread across the country. Snow in Oakland and Las Vegas? In spite of the Colorado cold, our squirrels seem quite warm in their fur coats.

Not so far fetched, Mark. Talk about a deep freeze. We had four days of below zero temperatures, down to -20 at night and up to -10 during the day. Power outages also added to the misery. So much for global warming.

The squirrels' tough-guy pride would probably be wounded beyond repair if they knew how cute they looked in their little uniforms.

When I was a child, I used to spend the night with family friends who had a pet woodchuck, Chucky. Chucky had a pair of blue pajamas he wore every night, and he liked to sit in a little red rocking chair. He was pretty cute, too!