The ABCs of Writing a Book

A few people seem to possess a sort of inherent compass that guides their minds into creating stories that satisfy all the requirements of good writing in one fell swoop of the pen, or a single foray across the keyboard. I'm in awe of the one-draft author. That's because I’m the polar opposite. I constantly edit and revise as I go.

Every writer must find what works best for him or herself. I don’t advocate that anyone follow my style of creating a book, but if you find something here that validates what you do or in some way intrigues you into trying a different approach, I’ll feel I have succeeded in some small manner.

I approach a new a novel with a basic idea for an incident that could lead to lots of complications. In my second Greg McKenzie mystery, for example, I considered what might happen if a penthouse balcony collapsed during a party at a new beachfront high-rise condo, killing two people. That presented the questions: what caused the accident, and who was responsible?

With the major premise in hand, I needed a cast of characters. I’m not a detailed plotter or an outliner, so I depend on my characters to dictate the direction of the story. I decided on a young architect/engineer from the previous book to bear the brunt of blame for the accident. For potential bad guys I picked a developer, a contractor, and an inspector. I later added a female real estate agent.

At that point I needed a little initial research to put me on the right track. Since I knew little if anything about condo construction, I consulted a couple of friends. One was a civil engineer, the other a structural engineer who dealt with concrete, the material of choice for building beachfront condos. That gave me enough information to start writing.

I began with a Prologue that, thanks to later revision, introduced all the suspects and most of the major characters, except for my protagonists, Greg and Jill McKenzie. I set it at the penthouse party and used a third person omniscient viewpoint so I could let the reader know the balcony was in trouble from the opening line. Starting with Chapter 1, the story is told in first person from Greg's point of view.

The architect/engineer is found dead the next morning of what the sheriff calls a self-inflicted gunshot wound. The young man’s parents are the McKenzies’ best friends, and his father doesn’t believe he would commit suicide. He asks Greg, a retired Air Force investigator, to look into it.

After the first few chapters in Nashville, the story moved to Perdido Key, FL. It was time for more intensive on-scene research. My brother had a condo there where my wife and I had stayed a couple of times a year, which is how the plot idea came about. We spent two weeks there checking out various angles. Since the so-called suicide occurred at the Gulf Islands National Seashore, I interviewed the National Park ranger responsible for law enforcement. Following up on what I learned from him, I talked to a sheriff’s investigator, a medical examiner’s tech, and a man in the building inspection office.

I also researched locations and backgrounds on Perdido Key, in Pensacola and around Escambia County.

Although I don’t outline, I did extensive character sketches for the major characters and typed up detailed notes from my research. And early on I plotted out where all the main characters were each hour on the night of the murder.

By this time I knew who the murderer was (or so I thought) and had a pretty good idea of where the story was headed. I sat down to write in earnest. But things happen. About halfway through the book, I changed my mind about the murderer. It required going back to make sure I had left enough clues to make the ending believable. That’s what I love about fiction. You’re free to alter the past anytime you like. Makes you feel like God tinkering with the universe.

As I mentioned at the start, I am a constant rewriter. Each time I sit down to write, I go back at least to the start of the last chapter, read through it and make changes where something doesn’t quite fit. Now and then I’ll start from the beginning and do a quick edit up to the point where I left off. Sometimes I may change a line back to what I had on the first try.

When I get to the end of the book, what might be called a first draft is really anything but. I take this opportunity to go back through the manuscript looking for places I can make the writing more colorful, more dramatic, more scintillating (okay, so I don't scintillate all that much). I also delete those too-cute phrases that I got carried away with in their creation. I try to smooth out the rough spots Chris Roerden cites in her book Don’t Murder Your Mystery. 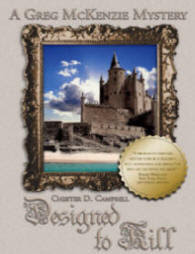 The book I covered here is titled Designed to Kill and was published in 2004. You can read the Prologue and Chapter 1 by clicking this link to the Designed Opening. If you're interested, go to my home page for a 40 percent discount on purchasing the book.

And if you don't agree with my technique for creating your masterpiece, work out your own. But sit down and write it. That's a requirement.
Posted by Chester Campbell at 12:00 AM

That is definitely my problem. I edit and revise as I go. It's hard to get anywhere because I always find something to change.

I write the same way, Chester, although I know it's more productive to write straight through and go back and revise after the first draft if finished. But I like to polish as I go along. And outlines are my anathemia. BTW, I'm looking forward to reading the first three Greg McKenzie novels when they arrive.