Fooled you. You thought this was another L’il Ella story, didn’t you? 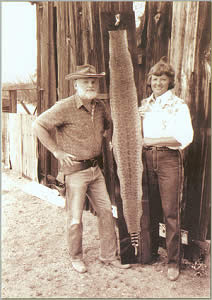 Yesterday, some friends and I visited a couple of rattlesnake hunters. How’s that for a different experience? Heck, if you’re gonna write a mystery where someone gets bitten or terrorized by a rattlesnake, you’d better learn something about them, eh?

Enter John and Sandy Weber, two Rockford, Illinois transplants, one of whom (John)

I worked with for a few years. Seems John got tired of corporate life and retired early – somewhere around 1977 or 1979, John can’t remember which – for a life in the desert.

Don’t think this is so strange. Wyatt Earp and his wife, after they left Alaska, spent three quarters of every year living in a wagon in the desert.

The Webers have improved on that a bit. They have two trailers, one for a shop, where snake-stuff and rocks are sold, and one for living. Both are a little beat-up, maybe, but John and Sandy don’t care. From the ever-present grins on their leathery sun-dried faces, they’re having a ball.

Finding their shop isn’t the easiest thing, and a GPS may not help you much, as I’m not sure their road, really a two mile driveway, is on the map. They’re located just south of historic Tombstone, off Gleason Road. All that tells you they’re there, except for a steady stream of traffic from people who found it once and are returning, is a dark wood sign.

The museum is perhaps the most fascinating aspect of John and Sandy’s activities. Through some thirty years of networking with ranchers, townspeople and targeting certain areas with metal detectors, John and Sandy have managed to pick up a wide variety of antique implements and weapons. 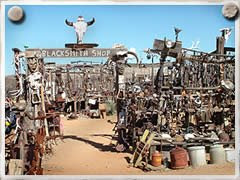 Rusted mining tools, Tombstone gun barrels – wouldn’t you love to learn the story behind them – ancient plow shares, cameras, axes, pitchforks, bull blinders, saddles, and other historical items, plus rifles and pistols adorn their yard, centered by a fire pit and chairs. Looking at the surrounding mountains and rolling hills, and listening to the sounds of the desert, one can only imagine the peace and tranquility John and Sandy must experience in the evenings, except during August.

John and Sandy spend most of their August evenings from six to nine, searching for rattlers. And find them they do, the largest so far having reached eight feet. They use a three foot long snake-catcher. “Hey, I’ve got one of those,” I said, my chest swelling with pride, “except mine’s ten feet long.”

They laughed at me. “Three feet’s all you need,” John said. He turned to Sandy. “Ben’s turned into a city-feller.” And then they laughed again.

We talked quite a bit about snakes, how to find them, what to expect, the length of their fangs, how far they can stretch with a full-blown strike, and of course, how to catch them. But John and Sandy don’t do all the hunting. They know all the ranchers in the area, and the ranchers trade them snakes and items for the museum in return for some of John’s goods. 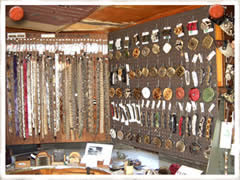 He and Sandy do good work. Need a snakeskin hat band, watch band, bracelet, belt, knife sheath or other snakeskin covered item, they can fix you up, and at prices you won’t believe. 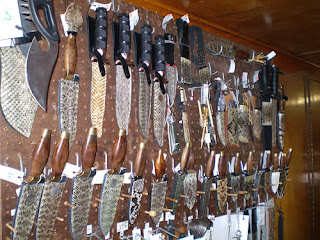 And they’re not limited to rattlesnakes, although they dominate the collection. There are also items covered with python skin, coral snake skin, and other varieties, often acquired by trading. Very quickly one realizes, John and Sandy don’t do this for money. They charge for their goods ― the museum is free ― but their prices are low. Besides, I know where John worked; he has a pension. They do this work because they love it. And after seeing their operation, I don’t blame them.

I’m not sure I’ve seen a happier couple.

So next August, I’m going snake-hunting...

Please come visit me in the hospital… And bring some money. Anti-venom is expensive, I've been told.

Check out John And Sandy's website at http://www.rattlesnakecrafts.com/about.html
Posted by Unknown at 3:13 PM

Fascinating, Ben. I checked out the website. They must be some characters. But Rattlesnakes and Rocks...what's with the rocks?

They're wonderful people, Chester. They truly are having a ball. The rocks people give to them, or they pick them up on their travels, maybe polish them a bit. And the rocks are beautiful. Lots of quartzite, mica brought down from the Black Hills, large copper ore pieces, and many minerals I don't know. Some pieces of torquoise, fool's gold, and bright and shiny stuff that would look good hanging on a necklace. I could spend hours in the museum, just imagining the history of the area and how many of these tools or weapons were used, not to mention by whom.

Their place is close to the location of the McLaury Ranch, two McLaurys being losers at the OK Corral shootout.

Wow, Ben, that's my kind of research place. I wish I had known about it when we were in Tucson. Some great photos, by the way!

I'd love to go there--and I've always wanted to go to the rattlesnake roundup they have in Texas every year.

Maybe I'll send you a chapter of my book; Bad Guy puts a rattlesnake under the driver's seat of Jared's Silverado!

Beth, that's one of my nightmares. Also, I can't open a mailbox without thinking to look for rattlers. Seen too much TV, I guess.

John has agreed I can go rattlesnake hunting with them next August, so I'm really excited. He said they grabbed 170 of them last August.