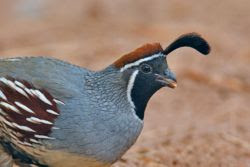 Contrary to Mark, I don’t enjoy flying. Not at all. And my distaste has nothing to do with fear.

“Harumph,” you say. “Don’t believe a word of it. He’s just chicken and won’t admit it.”

“Nay, nay,” I say. I prefer to think of myself as a Gambel Quail, a bird that can fly but prefers the ground. And heck, I even look like one. Replace a Gambel’s plume with a baseball cap, and you’ve got me.

Seriously, I know how well airplanes are made. I know about the redundancy of their systems, the sophistication of the computers that fly them on a wire. I know there are usually a series of failures causing a crash. Heck, I worked for an aerospace company that made many of these systems, and I spent the greater part of thirty years flying and defending air crash cases. Airplanes are safe, much safer than a car.

But I’ll take a car any day.

Recently, I was forced to fly from Arizona to Florida and back, a trip that would have required six hard days by car.

Well, I would have preferred the drive.

If I’d driven, I’d have toured the deserts of Arizona and New Mexico, and watched police-drug lord battles as I passed through El Paso. I’d have sniffed petroleum fumes all over West Texas, and snarfed plates of jambalaya in Louisiana. A book-on-tape would have carried me through Mississippi and Alabama, saving me from preacher-central-radio, and I would have landed in Palm Coast, Florida tired but happy.

I’m no sausage. I’m six foot six. I don’t fit in a seat built for a midget.

It’s bad enough that I have to stand in line for an hour before I strip down for the TSA cuties who want to wand my private parts. They’re talking smack and chewing on beef jerky strips, occasionally spitting out sinew-bits at me and other unfortunate captives. Then, as I start to tingle in anticipation of actually being next in line, the woman in front of me passes through the detectors. Alarm bells go off. The woman finds a hidden pocket in her moo-moo, and removes something metal from it. The TSA sharpie nods.

The woman steps through again, and the alarms ring once more.

This happens six times. I’m growing old standing behind this woman. And the fat guy behind me has stinky feet. His beat-up Converse All Stars look like they were made in 1956 and have been worn ever since. They’re next to me, just three feet from my nose. I imagine clouds of foot-gas wafting toward me. I turn and look at the man. I see sweat streaming down his swollen cheeks, and his light blue shirt is turning royal blue under the armpits. Deep, dark smiles.

I stare at those shoes, and guess they’ve been worn bare most of their service life.

Where is the EPA when you need them?

We finally board the plane, and wonder of wonders, Stinky turns out to be my seatmate. Yup. Squeezed between my wife and me.

My wife falls asleep immediately. Or maybe she fainted.

I’m in the window seat, and my seat belt receiver somehow slid underneath this guy’s butt, so now I gotta play cutsie with him to fish the thing out. He leans toward my wife ― which is when she went out, I think ― and I pull and tug. One final heave, and the bracket flies free. My back untorques, and my block cracks the junction of the interior fuselage and the overhead bin. I think I lost some hair.

Stinky is a chatterbox. Never flown before. He’s nervous. Which means he sweats more, too. The smell of foot becomes more prevalent. I can’t see if Stinky's removed his shoes, because I can’t move. I’m squashed into my seat like a sardine in a can. Irony is, I don’t need a seatbelt; you couldn’t pry me out of that seat.

Stinky says he’s from Tennessee, so I ask if he knows Chester Campbell or Beth Terrell. I don’t understand a word of his response.

I grin and pretend I’m somewhere else.

Stinky talks of his family, of his trip to Tucson, and other stuff I’m not really paying attention to. Besides, I can’t understand much of what Stinky says anyway. Part of my difficulty is his accent, which sounds a bit Clampet-like. But I can't concentrate either...

The stink, you know.

I pop an arm free and adjust the blower above my head, so it’s flowing full force. I debate where to point it, and then turn it his way. My unconscious wife drops deeper into her coma.

Something’s gotta change, so I tell this guy I’m gonna sleep, hoping this will shut him up. He mutters something and then reaches for the Sky Mall magazine. I turn my head to the right, grateful for another inch of distance from my seatmate, grateful even for the stale hair gell odor of the Naugahyde headpiece.

I’m just beginning to relax, when the seatback in front of me comes crashing into my knees.

My reaction is instinctual. I bellow and slam the back of the seat. The guy in front of me unsnaps his belt and turns around.

“No, you aren’t,” I say. “Not when doing so causes me physical injury.”

The man tries edging his seat back, and I counter his pressure. I’ve got better leverage, because I can use my arms and knees as pistons. There's nothing for his arms to do, and he can’t use his legs without flipping the guy ahead of him out of his seat.

So he summons a flight attendant, and when she comes, he starts his whine.

You can guess what he's saying: I’m a big meanie; I won’t let him lay his seat back.

The flight attendant looks at my knees pressed up against the seat, and politely tells the guy to go stuff himself.

Stinky wants to chat some more, and my wife is still out cold. So I yawn, feign sleepiness, and turn once more to the window. I don’t move the rest of the flight.

We arrive at Dallas, and the guy in front of me wants to size me up. He changes his mind when I finally unfurl and manage to stand.

We make it just as the doors are closing. Now we’re huffing and puffing and sweating. We’ll make wonderful seatmates for somebody, albeit with sweeter smelling feet.

The woman in the middle this time is an old lady. She’s got a pleasant smile, but wants to talk about her grandchildren. Fascinating topic: other people’s grandchildren. Especially on a two hour flight. And our seatmate’s soaked herself in old-lady-perfume. You know the stuff. I think it’s sold at the Instead of Bathing counter in Walgreen’s. I think you can also buy it at do-it-yourself pest control stores.

Of course, this torture extends for the entire flight. And when we get to Jacksonville, our baggage is lost. Somehow it ended up in Bangladesh.

And most wonderful of all, we got to do it all over again in just a week.

I don’t know what the 19th century naturalist William Gambel did to have this strutting ground-bird named after him, but I know Old Bill didn’t fly.

Maybe next time, I’ll just quail it to Florida.

Hey, Ben, I know that guy. He used to live down the street from me. I could smell his feet when I did my daily walk through the neighborhood. Made me go into a jog for that segment. But he's really a peach of a guy. Peach being the flavor of brandy he drank, which, in turn, made his tongue wag a little faster. Don't worry about not being able to understand him. He talks in pidgin English and even the pidgins don't know what the heck he's saying. Anyway, glad you had an exciting flight.

I am so with you on this. I trust planes, I trust the technology. It's the people equation I don't like.

Inconsiderate people, and all the waiting because of the meandering senseless policies of the airlines put into place by people who don't have to follow them.

And don't get me started on people who won't check their luggage.... and then want to stuff all their earthly possessions into a tiny bin crushing my stuff.

We flew in October and upgraded to first class, better, but there were still other people around.