Gone with the Wind - Confederates in Brazil

Gone are the days when my heart was young and gay,
Gone are my friends from the cotton fields away,
Gone from the earth to a better land I know…
Stephen Foster 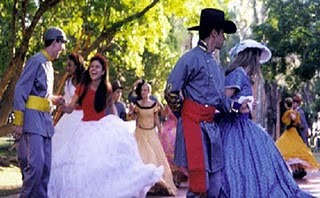 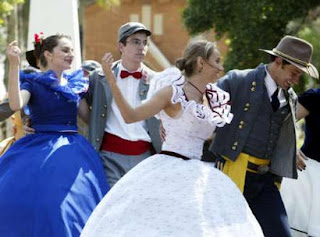 One day, a couple of years ago, I was in an office in São Paulo chatting to a friend in English. A lady I didn’t know came up to us and joined in the conversation. She spoke with the dulcet tones of the American South, and I asked her where she was from.
“I was born here,” she said, meaning Brazil.
“Okay. Your parents, then?”
“Here.  And my grandparents too.”
And then she told me the story of the Brazilian Confederates, which, Dear Reader, I’m now going to pass on to you:
After the War Between the States many families from the old south were left landless and destitute. They hated living under a conquering army of Yankees. They were looking for a way out.
Dom Pedro II, the progressive Brazilian emperor of the time, offered it. He was interested in developing the cultivation of cotton, and he gave tremendous incentives to people who knew how to do it. Land could be financed at twenty-two cents an acre. Passage cost no more than thirty Yankee dollars.
Scads of people from Alabama, Georgia, South Carolina, Mississippi and Texas took him up on his offer. 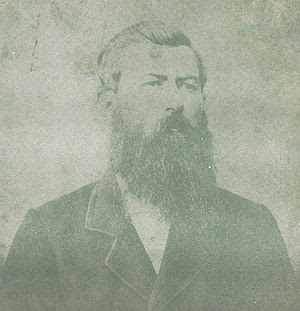 Many of them settled in the State of São Paulo in the towns of Americana and Santa Barbara D’Oeste. The name of the former is derived from the Portuguese for “Village of the Americans” and the latter is sometimes called the Norris colony, after Colonel William Norris, a former senator from Alabama and one of the founders. (He's the gentleman in the old photo above.) 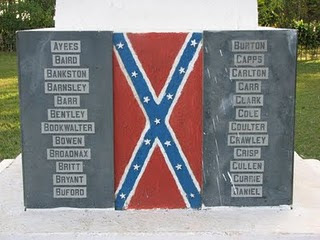 If you’re a Civil War buff, and would like to experience a vestige of the Old South, I suggest you go to Santa Barbara on the second Sunday in April. That’s when they hold a yearly party on the grounds of the cemetery. 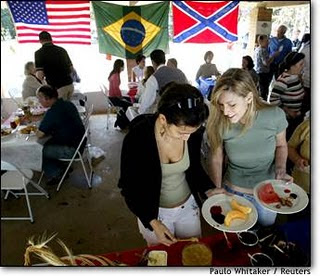 Yeah, that’s right, the cemetery, the one where all of those old confederates are buried.
You can eat southern fried chicken, vinegar pie, chess pie and biscuits. Banjos are played. Confederate songs are sung. The women dress in pink and blue and wear matching ribbons in their hair. Near the Presbyterian Church, the first non-Catholic church ever built in Brazil, there’s square dancing for the young folks.

The men of all ages get drunk and replay the war, looking at first as if they’re celebrating a victory. But at the end of the performance the bearded actor, playing Gen. Robert E. Lee, falls down as if mortally wounded, a Confederate battle flag wrapped around him. 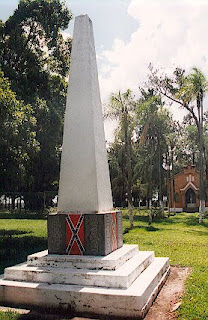 And you might well get to meet someone like Becky Jones, a member of the Association of Confederates, a group that’s three-hundred members strong. Becky learned her English from her parents. They learned it from their parents. And so on. Prompted, she’ll tell you that (even) Damnyankees are welcome to the party, but they have to expect to be received differently than someone from the South. She might tell you, too, about her grandmother, Mrs. MacKnight-Jones, who survived well into her nineties. Grandma learned from her parents never to call Abraham Lincoln by his name. In their household he was only referred to as "that man." And the family tradition goes on until this very day.

Leighton - Saturday
Posted by Leighton Gage at 12:05 AM

There is a common misperception that the Civil War is over. For the most part, that's true, but there are plenty of pockets in the Deep South where that isn't the case. This celebration "further south" reiterates that the notion that "all men are created equal" has yet to be accepted.

You're absolutely right, Mark. I lived in South Carolina for a little more than three years and was quite surprised by the accuracy of your remarks. Those pockets, while small, are alive and well.

Fascinating, Leighton. I had no idea that the South had risen again in Brazil (and my ancestors are southerners).