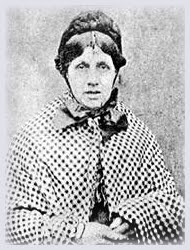 As mystery writers, it seems that we mostly concentrate on the males of the species for our bad guys. According to those who study the subject, however, some of the most horrific crimes have been committed by women. The website Criminal Justice Degrees Guide has provided us a rundown on the Top 10 bad gals. Here they are:

1. Lizzie Borden: Lizzie Borden was the top suspect in the gruesome 1892 murders of her father and stepmother in Fall River, Massachusetts. On August 4, 1892, Lizzie found her dead father slumped on a couch and bloodied from multiple crushing blows to his skull and his left eyeball split in half. The Borden’s maid, Bridget Sullivan, was lying down in her room when the murders occurred and was called down by Lizzie when she discovered her father’s body. Her stepmother, Abby Borden, was found dead in the guest bedroom from similar hatchet blows to the head. Lizzie was arrested and taken to jail following the murders. During her murder trial, Lizzie’s stories were inconsistent and suspicious, and much of the incriminating evidence was overlooked. Despite the fact that police found a hatchet with a broken handle in the basement, and knew that Lizzie had attempted to buy prussic acid and even burned one of her dresses days after the murders, Lizzie was acquitted. The maid even provided key testimony at the trials, claiming that Lizzie never mourned the loss of her parents. However, no one else was ever arrested or tried for the murders of Andrew and Abby Borden.

2. Bonnie Parker: Bonnie Parker was an accomplice to Clyde Barrow during the duo’s spree of robberies in the south and central United States during the Great Depression. During this "public enemy era," Bonnie, Clyde and their accomplices garnered national attention for numerous robberies, murders and their ability to escape police on every occasion. Although Bonnie rode with the Barrow gang for 4 straight years and was often depicted as a cigar-smoking and gun-wielding killer, there is no record that she ever shot a gun or killed anyone. After many attempts to stop the outlaws, police finally succeeded with a carefully planned ambush, in which Bonnie and Clyde were shot and killed on a rural road in Bienville Parish, Louisiana, on May 23, 1934.

3. Mary Ann Cotton: Mary Ann Cotton was an English serial killer during the 19th century, who was suspected of killing about 20 people by arsenic poisoning. Cotton took no mercy on her victims, killing her husbands, mother, friend and even her own children. The murder spree began when she married her first husband, William Mowbray. The couple had five children and quickly lost four of them to gastric fever and stomach pains. They had, and lost, three more children, and Mary Ann became a widow after her husband died of an intestinal disorder in 1865. Mary Ann collected his insurance and moved on to her next husband. Mary Ann continued the pattern of marry husband, give birth to child, child dies, then husband dies and she collects the insurance money. By the time she met her fourth and last husband, Frederick Cotton, Mary Ann had lost her mother, friend, three husbands and 11 children all to stomach fevers. After Frederick’s sudden death and the death of the last surviving Cotton boy, Charles Edward, the coroner became suspicious of the cause of death and Mary Ann’s role in the fatalities she had witnessed through the years. When Charles’ body tested positive for arsenic, Mary Ann was arrested and later found guilty for the murders and was hanged.

4. Aileen Wuornos: Aileen Wuornos was a serial killer and prostitute who killed seven men in Florida from 1989 to 1990. Wuornos had a rocky upbringing that led her into prostitution at a young age. It was then when she began having trouble with the law, including DUI, disorderly conduct, assault, armed robbery and theft charges. Around 1986, Wuornos met Tyria Moore, a hotel maid, and the two began an intimate relationship together. Wuornos supported them with her prostitution earnings, but the payments were not sufficient enough. They decided that in order to make more money, Wuornos would have to rob her customers and shoot them. The first victim, Richard Mallory, a convicted rapist, who Wuornos claimed to have killed in self-defense, was found dead along a dirt road in Volusia County, Florida. He had been shot three times with a .22 caliber weapon and wrapped in a rubber-backed carpet runner. Another naked male body was found in Florida woods with similar gun shots that appeared to be made with a .22. Over the course of one year, five other male bodies were found throughout Florida. Witness descriptions of the two women seen driving the victims’ cars and Wuornos’ fingerprints on victims’ belongings pinned her as the murderer. Wuornos was arrested and claimed self-defense in the killings of all seven men, but her inconsistent stories and varied confessions led her to receive six death sentences. She was executed by lethal injection on Oct. 9, 2002.

5. Genene Jones: Genene Jones is a serial killer who killed somewhere between 11 and 46 infants and children while working as a pediatric nurse in San Antonio and Kerrville, Texas. Jones injected children with digoxin, heparin and succinylcholine that caused heart paralysis, breathing complications and often led to death. Her intention was to put children in an emergency state and revive them to receive praise and attention from parents, doctors and the public. However, many children like Chelsea McClellan did not survive the attacks, and their deaths were labeled as SIDS, sudden infant death syndrome. When suspicion rose about the eight children who developed emergency respiratory problems at the pediatric intensive-care unit in Kerrville, and an inordinate number of child deaths at Jones’ previous job at Bexar County Hospital, investigation ensued. Chelsea McClellan’s body was exhumed and the coroner found succinylcholine in her tissues. Although the evidence was compelling, no one had actually seen Jones inject Chelsea or her other victims. After several organized hearings, the Kerr County grand jury found Jones guilty of one count of murder and several charges for injury to seven children. She was sentenced to 99 years in prison and will receive automatic parole in 2017.

6. Andrea Yates: Andrea Yates is responsible for killing her five children on June 20, 2001 by drowning them in the bathtub at her house. Yates had been suffering with a severe case of postpartum depression and psychosis. Andrea and her husband, Rusty Yates, had five children between 1994 and 2000, but it was only after the birth of Luke, her fourth son, that Andrea showed signs of depression. She became suicidal and tried to kill herself on many occasions. After being admitted to the hospital, Yates was prescribed a mixture of antidepressants and anti-psychotic drugs, including Haldol. Although her condition improved, she did experience a nervous breakdown and two suicide attempts a month later. Yates was diagnosed with postpartum psychosis and, ignoring her psychiatrist’s advice to stop trying to have more children, she gave birth to her sixth child, Mary. When Andrea’s father died in 2001, she fell into a severely depressed state by not talking, mutilating herself, reading the Bible loyally and neglecting to feed Mary. Yates was hospitalized again and the doctor informed Rusty that she must be supervised around the clock at home. On June 20, 2001, Rusty did not follow the doctor’s orders and left Andrea alone with their children when he left for work. Within the one-hour span of Rusty leaving and Andrea’s mother’s arrival to the house, Andrea drowned all five of her children one by one. Yates was originally convicted of capital murder and sentenced to life in prison with the chance of parole after 40 years, but it was later overturned when a Texas jury found her not guilty by reason of insanity. Yates currently resides at a low security state mental hospital in Kerrville, Texas.

7. Countess Elizabeth Bathory: Elizabeth Bathory was a countess from Hungary, who belonged to the renowned Bathory family. But she is most infamously remembered as a serial killer who tortured and killed hundreds of girls and young women in her castle. As legend has it, Bathory bathed in the blood of virgins to retain her youth. One witness claimed that the "Blood Countess" and her four accomplices killed more than 600 women, but they were only convicted of 80 deaths. Bathory was sentenced to imprisonment in the Cachtice Castle, where she stayed until she died in 1614.

8. Karla Homolka: Karla Homolka and her husband Paul Bernardo were a team of torturers, rapists and murderers. They raped and murdered two Ontario teenage girls, Leslie Mahaffy and Kristen French, as well as Homolka’s younger sister, Tammy, between 1991 and 1992. In an effort to please Paul and keep him around, Karla agreed to engage in the gruesome acts and even videotape the rape-murders. Police began questioning Karla and Paul in connection with the Scarborough Rapist investigation and tested DNA samples provided by Bernardo. When the test results came back matching Bernardo’s DNA with that of the Scarborough Rapist and he was placed under 24-hour surveillance. Even though Homolka was arrested, she managed to get a lighter sentence of 12 years in prison because she claimed that she was forced by her husband to participate in the heinous crimes.

9. Susan Smith: Susan Smith murdered her two young sons by rolling her car into John D. Long Lake in South Carolina with her children inside on Oct. 25, 1994. Smith told police that she had been carjacked by a black man who drove away with her kids in the back. A nationwide search for Smith’s 1990 Mazda Protege and highly publicized rescue efforts to find her sons came to a halt just nine days after the incident, when Smith confessed to rolling her car into the lake with her kids inside. Smith claimed that she had mental health issues that impaired her judgment, but her alleged motives for the murders contradicted her defense. Smith disposed of her children so that she could mend a broken relationship with a wealthy local man who didn’t want to be with a woman who had children. Smith was charged with two counts of murder and is serving a minimum of 30 years in prison.

10. Diane Downs: Diane Downs is infamously known for shooting her three children, killing one, in order to keep her lover who didn’t want kids. Downs told police a fabricated story that a stranger had tried to carjack her, shot her in the arm and shot her three kids near Springfield, Oregon. She then drove to the McKenzie-Willamette Hospital with her children in the back. Her second child, Cheryl, was already dead when they arrived. Downs had been shot in her left forearm, which was later determined to be a self-inflicted wound used to support her carjacking story. Downs rehashed the events to police and was recorded on camera laughing as she described the traumatic details. Her calm behavior and mannerisms made police very suspicious of Downs’ role in the shooting and murder of her 7-year-old daughter. When police discovered that Downs was involved with Robert Knickerbocker, an Arizona man who did not want children in his life, all signs pointed to Downs as the murderer. Prosecutors strongly believed that Downs attempted to kill all three kids so she could continue her affair with Knickerbocker, but it wasn’t until her oldest daughter, Christie, gave a key testimony that it was in fact her mother who shot her and her sisters that the case came to rest. Downs was found guilty on all charges and was sentenced to life in prison, plus 50 years, on June 17, 1984.

(List copyright 2010 CriminalJusticeDegreesGuide.Com, used by permission)
Posted by Chester Campbell at 10:14 AM

Good one, Chester. A shot across the bow.

They must have sent that article to all of us. :)