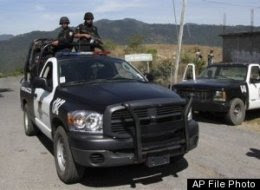 Some of David Baldacci's Divine Justice Camel Club heroes fight illegal activities run from a small town mine. Terrible conspiracies, and just under the nose of federal inspectors and state officials. Big money. A good, suspenseful story, and I enjoyed the book, although I thought it stretched credibility a bit. How could such a wide conspiracy be run for so long without anyone involved in regulatory or law enforcement taking any notice? How wide must the conspiracy extend?

Well, as seems to be the case more and more these days, David could have stretched this plot-line even further and still run short of reality.

A Northern Mexico prison just got caught running hit man squads. Prisoners, many of them juveniles, supplied weapons and vehicles by prison officials and then sent on execution missions. Their last one? The birthday party massacre you heard about last week. One hundred twenty rounds fired; seventeen dead, eighteen more injured. The executioners shot wildly, striking guests and bystanders. All part of  the ongoing Mexican drug wars.


Don't believe me? Check out this link: Murder School. Or this one: NYT Report

Now, as a novelist, I think this is a great idea. Consider the coordination involved in such a project. How does one shut prisoners up? They're known for bragging about their exploits, known for turning on their co-conspirators or cell-mates. How did the director of this prison and his top three subordinates think they could keep their execution-for-rent operation quiet? Obviously, police and other governmental officials knew. These guys were for hire, cash on demand. C'mon, lots of people touched their nose and rubbed their fingers.

"A rival gang crossed a forbidden boundary? Someone didn't pay for their load? Need to pay a debt and don't have the funds available? Call Hector Gomez, Gomez Palacio Prison Director. Hector will dispatch your problemo and send a strong, clear message. Low rates, terms on arrangement. Quantity discounts. Pricing to fit any budget."

Would make a good TV ad, eh? Maybe some AKs going off in background, some blood spatter, maybe some subliminal stuff...

But take a look at this map:
Location of Mexican Hit Man Prison Execution Squads

Notice how close the prison (marked with the red "A") is to the U.S. Border, especially such border towns as Yuma and Mexacali. Just a short hop, around fifty miles, to interstate 8 and easy access to these cities, plus San Diego, Phoenix or Tucson. And lots of trails to the highway and a fence that can in spots be walked over, in others, crossed by ATV and ramp.

Mexico is at war with its drug lords, and we cannot secure our borders, a recipe both for a great novel and real tragedy. Somebody will write the novel; the tragedy, we're seeing play out along our borders every single day.

What are we to do?

I've got two suggestions: 1) Secure our border, and 2) Take the market away from the drug lords.

The first solution is obvious. Leaving our borders open invites tragedy, either continued growth of the drug and human smuggling cartels and gangs and their wars, or a terrorist sneaking some dirty bombs inside our country.

The second solution relates to simple economics. President Calderon has blamed the U.S. for its demand for drugs, saying truthfully that American money is driving these gangs into ever more outrageous, murderous conduct. Money talks. And the money here is buying marijuana, by far the largest percentage of goods smuggled over the border.

What if we legalized marijuana, regulated it and taxed the hell out of it?

California is reputed to grow the best marijuana in the world, and California is mired in a deficit crisis, as is the federal government. Some have estimated the value of California's marijuana crop in the hundreds of billion dollars. And that's while it's still illegal to grow the stuff in most areas. If we legalized pot, wouldn't we solve some of our budget woes and deprive our crooked southern neighbors of much of their oh-so-profitable market?

Look what the end of Prohibition did to alcohol smuggling.

Seriously, our scientists have studied the effects of marijuana for over seventy years. They've yet to find a reason to criminalize it beyond the effect originally intended by Wm Randolph Hearst when he funded its criminalization effort: to get rid of Mexicans.

Hi Ben. Interesting post. I'll bet the big tobacco companies are ready to move right in and help with production and distribution at a moment's notice. :)

I've been preaching the same things, Ben. Unfortunately, the White House and Congress ignore my letters. Sooner or later, both will come to pass, but at what cost? One thing is certain, it's beyond time for change. Keep your head on a swivel.

I'v been hearing this argument for years, Ben, and can't say that I disagree with you. Is there any real evidence that marijuana is a "gateway drug" that leads to hardcore drug use?

"California voters have a chance on this November's ballot to bring common sense to law enforcement by legalizing marijuana for adults. As San Jose's retired chief of police and a cop with 35 years experience on the front lines in the war on marijuana, I'm voting yes.

Like an increasing number of law enforcers, I have learned that most bad things about marijuana -- especially the violence made inevitable by an obscenely profitable black market -- are caused by the prohibition, not by the plant."

Jean, this has been studied for years, with no real analysis that isn't disputed. From what I've read, those who use stronger drugs, probably started out with either alcohol or marijuana, but studies also show that one doesn't necessarily lead to another. But look at Amsterdam, where although not legal, marijuana laws aren't enforced unless the use is public and usually associated with other illegal conduct. But Amsterdam has very little problem with abuse or trafficking of other drugs.

Anything that's banned or illegal seems to be more desireable, so it stands to reason that legalizing marijuana in reasonable amounts should eliminate illegal trafficking, but what about cocaine, methanphetimines and other hardcore drugs? Should we also legalize them? Do you have any statistics on how much is coming across the border? (I've heard that most meth labs are local).

Jean, I can't quote statistics, but most of the drug hauls being caught here in AZ are marijuana. An FBI agent friend told me the same thing you said, that most meth is home cooked in the rural areas of the country. Bundles of marijuana are found in the desert daily, usually packed in burlap bags containing plastic-wrapped pound bags. They're finding it in eighteen wheelers, in pickup trucks and piled high at stash points in the desert or stash houses in the Phoenix area.

Hear, hear, Ben. Your comparison to prohibition is spot on. We all know how well that worked out.