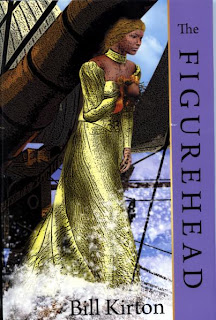 Bill Kirton's latest novel, The Figurehead, is the story of blackmail and murder set in Aberdeen, Scotland's shipbuilding industry, circa 1840. The body of a scheming, blackmailing shipwright is found on the beach and no one is surprised by the murder. Not even the shipbuilder's wife, who apparently has a lover and is included among the suspects who have been cheated, or cheated on, by the victim.
It's not the first body to be found on the beach, most of them seaman who have washed ashore. Because the police are indifferent, John Grant, a wood carver, usually winds up investigating the deaths on his own. When Grant gets involved in the crime, he's approached by a rich merchant, William Anderson, the employer of the murdered man, who commissions Grant to carve an image of his wife for the ship that has been named for her. During the process, Grant  falls in love with Anderson's daughter and discovers the plot that led to murder.

The author's extensive research is apparent in the details of shipbuilding as well as the moral fiber of people who lived during that period of Scottish history. A resident of Aberdeen, Kirton lightly weaves Scottish brogue into the fabric of the story--just enough to make the scenes authentic and pull the reader in. His characters are artfully drawn, particularly his female characters. I would give The Figurehead  a 5-star rating because it's beautifully written and leaves me wanting more.
Bill Kirton began his career as an English actor, playwright and broadcast script writer. He now balances his police procedural novels with promotional work for North Sea oil companies at his home in Aberdeen. He began writing playlets at the age of eleven. He said, "I used to enjoy writing things–mainly funny stories but also playlets--awful, awful things.I found one a few years back and while I suppose it was okay for someone of that age, it definitely didn’t show any early promise."
While in his mid-twenties he was invited to the newly opened Northcott Theatre in Exeter, England, because a BBC producer, on the strength of some scripts he'd sent him, told the director, the late Tony Church, that Kirton was a playwright. Chuch introduced him to his production team, saying "This is Bill Kirton. He’s a writer." Kirton said, "I’d never heard it said before and I haven’t forgotten the pleasure it gave me."
He wrote parodies of poetry for the school magazine and a couple of articles for the university newspaper but didn't received his first paycheck for his writing until he was 32. It was a radio play, "An Old Man and Some People," broadcast on Radio 3 and  Radio 4 by the BBC in 1971."I’ve had several more broadcasts since but, strangely, I think that was probably my best one."
He writes full-time because writing is also his day-job. He used to lecture in the French department of Aberdeen University, and also wrote for TV and radio, which led to writing scripts for safety programs, documentaries, brochures, promotional and educational material. Since moving from England to Scotland,  he found that North Sea oil companies needed scripts and press releases. "I was getting so much of that to do that I eventually took early retirement [from full  time work-for-hire] to concentrate on my writing.
"This balancing of writing fiction and hard commercial fact is interesting. I’m always aware that the commercial work is what earns the money but I’m always happier when I’m writing what I call my own stuff. The commercial material has its own rewards."
Writing police procedurals came about gradually. "I didn’t really have this mystical thing which whispered to me ‘you must write a police procedural’. It was much more prosaic than that. I’d written mainly stage and radio plays and the occasional short story and one day I read of a novel-writing competition. So I started writing a novel. And that in itself was interesting because, like most other people, I thought ‘Wow, a novel. That’s long. Quite an undertaking.’ But I soon realised the perhaps obvious truth–that you don’t ‘write a novel’, you write a few sentences, some paragraphs and, at the end of each day, the pile of pages is that much bigger. And, if you’re enjoying it, you eventually see that it’s actually looking like quite a substantial heap, so you’re determined to finish it."
Bill Kirton's recently released novel, The Figurehead can be found at Amazon.com.
Posted by Jean Henry Mead at 12:01 AM

Thank you, Jean, for such kind words. I'm particularly interested in what you say about the female characters. A friend and I recently had the familiar old discussion about whether men could create female characters and vice versa. As I've said before, paradoxically for me the characters create themselves. In this book Helen took over to such an extent that my feeling is that she'll be the central character when I eventually get round to writing a sequel.

You're very welcome, Bill. I enjoyed the book and found it difficult to put aside. I look forward to the sequel.

This sounds like a wonderful book, one I'd definitely like to read. And the cover is gorgeous, too.)Since today is payday, I'll order it this afternoon.

Thanks for introducing us to it, Jean.

It is a lovely cover, isn't it? I know you'll enjoy the book, Beth, especially Bill's women characters. :)

Thanks, Bill, Jean. Historical novels are a real challenge, but are often the most interesting. I can practically smell the salty air:)