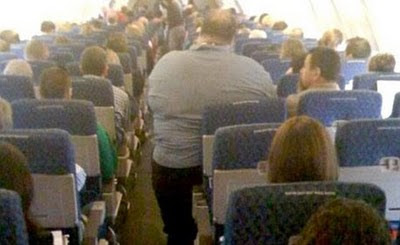 By Mark W. Danielson
As strange as it may sound, I’m not a huge fan of airline travel. Don’t get me wrong – I love flying, so long as I’m the one piloting the airplane, but being crammed in the back of a flying Greyhound bus is a whole different story. Having said that, deadheading on a passenger carrier provides wonderful opportunities for observing people

Consider this scenario: As the time to board nears, the passengers grow anxious over whether their bags can be stored in the overhead bins. Then an announcement comes stating that those passengers in Seating Areas Three and Four must gate-check their second bag. Many comply, but others hold off, taking their chances. When the boarding begins, so does the exercise in social behavior.

In a panic, passengers cram their bags into the bins as if will power and determination will make them fit. Those seated near the aisle are frequently struck by handbags and backpacks as their owners obliviously stroll by. Finally, a flight attendant takes the initiative to stack the bags like Jenga sticks. In minutes, the chore is complete and the bin doors are closed.

Soon after, light conversation begins. Toward the back, a baby cries. Closer to the front, a group breaks out in spontaneous laughter. Finally, the plane moves back and humming vibrations trickle through the fuselage as its engines start. Once the plane is taxiing, the lights are dimmed, and in unison, dozens of hands reach for the overhead reading lights. Suddenly, air blasts through the vents like an ocean wave. Someone coughs. Nearby passengers aim their vents to deflect the germs.

By the time the plane reaches cruising altitude, most passengers are silent, disturbed only by the flight attendants’ beverage cart. “Something to drink?” is constantly repeated. Playing cards are shuffled. A baby giggles, then says, “No!” Once the seat belt sign is turned off, people dart for the rest rooms, halting the flight attendants’ beverage service. An overly tanned blond gliding down the aisle is suddenly blocked by an obese man traveling in the opposite direction. The resulting stalemate forces the blond into occupied seat 22D to let him through. They pass and return to their seats without saying a word.

Now, let’s say this blond and the obese man knew each other and that their rendezvous was pre-arranged so the man could dump poison into 22D’s drink. She’s pretty enough to command attention. No one wastes their time on the obese man. Soon after the man and woman have returned to their seats, 22D spills his drink and begins convulsing. Several passengers call for the flight attendants. One of them grabs the on-board defibrillator and oxygen bottle while the other calls for a doctor. But it’s too late. In seconds, the passenger in 22D is dead. Another perfect murder. I’m glad I fly cargo.

There are, of course, hundreds of scenarios for murder on a plane. Poison just happens to be the easiest; especially with so many passengers reluctant to engage in social interaction. So the next time you fly, recline your seat, keep your eyes open, and if you’re a mystery writer, prepare to be inspired.
Posted by Mark W. Danielson at 12:01 AM

Loved this post, Mark. I've flown so many times in turbulent weather that congering up murder scenes became a hobby to distract me from what could actually happen to the plane.

Great post, Mark. I knew there was a reason I didn't like flying. Now I know never to trust a blonde bearing poison.

Yes, mystery writers are warped:) Then again, so is everyone else on the plane. Yesterday's deadheads to Phoenix and Oakland brought more inspiration as the person behind me was playing her headset loud enough for everyone could hear. The flight attendant finally asked her to turn it down. Then the man next to me decided to get up twice while the plane was on the ground but away from the gate. Both incidents could have been good distractions for other events going on. My focus is always on the cockpit door whenever something catches my eye. I'm prepared to defend it from either side of the door.