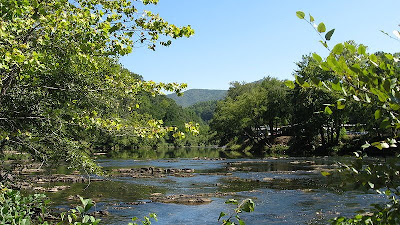 If you're on the run from the law and looking to survive, one of the places you might consider is Jackson County, North Carolina, home to the Blue Ridge Mountains and the Chattooga and Tuckaseegee rivers. You may remember the Chattooga River from the movie Deliverance, but it's hard to tell the difference between these two rivers, as both are white water gorgeous, trout filled and bordered by the Blue Ridge Mountains, part of the Smokey Mountain chain.

But risks there are aplenty. Not only are many of the roads unlisted and wide enough for only one vehicle perhaps, but in the hills and valleys, often steep and uncluttered by signs of civilization, timber rattlesnakes and copperheads await the unwary, along with poisonous plants, centipedes, mountain lions, bears and other critters so gross to view, they make scorpions look like fun playmates. One can still find moonshiners in these mountains and if you see irrigation lines, there's likely a marijuana field nearby. I'm told some of the best "stuff" comes from this region, because of the fertile soil, abundant sunlight and high humidity and frequent showers. But beware falling trees, called "widow-makers" in this region. High winds are frequent, snapping off trees like twigs, and if one looks up in the forest, one can usually see high branches broken and barren, ready to fall at any slight following breeze, or maybe from rot.

My wife and I are visiting our son and his family for a few days, and we took the opportunity to go exploring the Blue Ridge Mountains and the tributaries of these rivers by ATV, accompanied by some mountain men friends of my son.

Eric and his brother Jay, two Jackson County natives who live off their forages in the forests. Red ginseng and other valuable herbs grow in abundance in these mountains, and many of the streams carry gold dust and nuggets. Ginseng brings about eight hundred dollars a pound, and the best ginseng is found growing naturally in the mountains, not farmed in meadows. Seems the harder the roots must press into the earth, dodging rocks and tree roots, the more powerful the ginseng mojo.

And Eric and Jay know how to find these things; indeed, they make their living doing so. Ginseng season is September to October, and the plants, about two feet tall, can be identified by their cluster of red seeds. The leaves themselves can look like poison ivy, so one must not mistake red stalks (poison ivy) from red seed clusters (ginseng) in the fall. Three or four stalks around the seed cluster identify a mature plant, one which may be harvested.

A few minutes of foraging during a rest stop on our ATV adventure, and Eric and Jay had found some ginseng plants, the seed clusters still green. Eric told me when he plucks the plants, he rips off the seed clusters and sprinkles them in the area where the plant was found. Shortly, the seeds will be covered with moss and begin to germinate. In a couple or three years, he can return and collect new plants.

Stung by nettle plants, burning and itching, the solution is to spread creek mud on the affected areas. Relief quickly follows.

As one might expect where mountains are steep, heavily forested and rains are frequent, there are many stream channels feeding into these two rivers. And that means crawdads (crayfish) can be found under rocks. Good eats. Most are brown, but some are red. And Eric and Jay tell us red crayfish mean the presence of gold. They proved their point by digging in the dark earth under the rocks where they found red crayfish, panning and displaying the gold dust from the fruits of their labor.

Eric and Jay may not be book smart, but they know these forests, rely upon them for their living, and they are prospering. They reminded us that the famous Star Ruby, the largest ruby ever found, came from Jackson County.

Jackson County, North Carolina may seem remote to some, but its beauty, mild temperatures and abundance of minerals and natural wonders make it the place to go if you want to get away and explore. Or if you want to hide out.

But if one is going to explore this area, it's best to have someone with you who knows well these forests. It's easy to get lost on these trails and civilization can be a long way off. Copperheads make no noise, and they're invisible in dense forests. My son's a builder in the Blue Ridge Mountains. He finds three or four copperheads or timber rattlers a day, he says.

Need I say my wife and I followed my son and his mountain men friends closely during our forest adventures?

My son would be happy to build you a house...
Posted by Unknown at 1:55 PM

Interesting post, Ben. Can't say I care much for snakes, but they have a purpose, too.

As I read, I couldn't help thinking about the so-called Barefoot Bandit hiding out in such forests. He might have kept going had he stayed here, but when he landed on an island, he was bound to get caught. Glad he did.

A beautiful place, Ben. Do you plan to write a book with the Carolina setting?