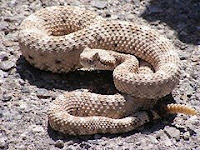 Several weeks ago I wrote about our mountain mini-ranch and that it's a retirement paradise. But every Garden of Eden is inhibited by a serpent and we've been adopted by a five-foot rattler of our own.

Much of the property is covered in buckbrush, which serves as a hideout for a variety of creatures, including deer, antelope, elk, coyotes, rodents, wild turkeys and sage hens. The brush is also home to large flocks of birds and we gladly welcome their presence.

But rattlesnakes are a different tale. Those of you who regularly read this blog know that I’m a research hound, and I decided to read about our unwelcome guest. Here's what I learned: there are some thirty species of rattlers as well as many subspecies. Their scientific name is Crotalus, which comes from the Greek word kporalov, and means castanet. The snake’s rattle also shares its name with the sistrum, an ancient Egyptian musical instrument.

Rattlesnakes give birth live and have no need to care for their young, which at birth are literally on their own. The infant rattlers are born with fangs capable of injecting venom and are considered more dangerous than the adults because they have less control of the amount of venom they inject.

Some 7,000-8,000 people are bitten each year and five of them don't survive. About 72% of those bitten are males. Antivenom, when applied in time, reduces death to less than 4%. The snakes can strike up to a distance of two-thirds the length of their bodies and their venom can kill rodents, small birds and animals within twenty seconds.

According to the Wikipedia: “Quick medical attention is critical, and treatment typically requires antivenin/antivenom to block the tissue destruction, nerve effects, and blood-clotting disorders common with rattlesnake venom. Most medical experts recommend keeping the area of the bite below the level of the heart. It is important to keep a snake bite victim calm in order to avoid elevating their heart rate and accelerating the circulation of venom within the body.

Untrained individuals should not attempt to make incisions at or around bite sites, or to use tourniquets, as either treatment may be more destructive than the envenomation itself. Any bite from a rattlesnake should be regarded as a life-threatening medical emergency that requires immediate hospital treatment from trained professionals.”

I think we’re going to name our mini-ranch Rattlesnake Ridge and we’ll definitely acquire an antivenom kit. Hopefully, our uninvited guest isn't a female ready to give birth, but just in case, we’ll be prepared because the nearest hospital is 30 miles away by flight-for-life helicopter.
Posted by Jean Henry Mead at 12:01 AM

I'll have to watch out for baby snakes!

I don't think we have any rattlers in NC, but we did in AL...

Many years ago, a fisherman told a story about how only one person at Redfeather Lakes was catching anything. This particular fisherman was a young kid who was using stinger worms for bait. Yup, you guessed it -- these "stinger worms" were baby rattlers. The kid was rushed to the hospital and as far as I know, survived, but I'm sure he's changed his bait.

Snakes don't seek out humans, but occassionally we end up in the wrong place at the wrong time. The best thing to do if bitten is to remain calm, ice the wound (if ice is available), and seek prompt medical attention. Your chances for survival are good, but since snake poison attacks muscle tissue, you can end up with horrific scars.

Snakes are an important part of nature, so give them the respect they deserve, keep your distance, and you should be fine.

Elizabeth, I hope you don't have rattlers in North Carolina. I'm amazed that so many people have them as pets.

That's quite a story, Mark. I'll remember to check to make sure none of my fishing worms are "stingers." :)

Your advice is good. People should never approach a snake with a rattle on its tail, but sometimes you can step on one in the brush. That's why we wear snake "leggings."

Heather at My Coupon Coop said...

Yikes! All snakes give me the willies. Rattlers are a whole different kind of willies.

I chuckled about your revelation of being a research hound, after watching you go on with such specifics. What a mind you've got!

Thank you, Heather, I think. I'm not sure whether that's a compliment. Snakes give me the willies as well, but, along with mosquitos and other bothersome creatures, I'm sure they have a purpose. :)

Jean, I assume you're aware that any invitations to dinner you hand out to readers of your blog may be met with polite mumblings and a sudden discovery that one has a prior appointment on the date in question (even when the date isn't yet known).

LOL, Bill. I'll simply tell them we're having barbequed rattlesnake for dinner. It's considered quite a delicacy in some parts of the country. :)

Jean, that looks like a diamondback. They're hemotoxic, as you know. The venom destroys tissue. But there's even a more dangerous species of rattler, the Mohave, often green in color. The Mohaves are both hemotoxic and neurotoxic, making them much more dangerous, more like a coral snake or cobra. Every year, more people die in Arizona from the bite of the Mohave, an aggressive snake, than all other rattlesnakes combined. These are nasty fellows, and they tend to be small and hang out in washes. A friend had an encounter with one while riding his trail bike through a wash. He stood his bike on its front wheel, and dumped off, but then had to wait while the snake played with his bike for two hours.

Believe it or not, I've been in Arizona now for three years, and have yet to see a rattler in the wild.

We've been warned not to go outside at night without a flashlight, as that's hunting time for rattlers. And they like to hang out on covered decks during the day, because it's cooler than out in the sun.

I lived in Arizona for two years and never saw a rattler, but we've had three of them here in our rural subdivision in the last two years. We then heard after we bought our mini-ranch property that a rattlers' den was just across the highway, but this big five-footer is the first we've seen. Hopefully he was just passing through (on his way to Arizona).

Jean, supposedly they're territorial, and don't stray far from home. We've been advised that if one drops them too close to home, they'll come back, too far away and they die. So I expect you'll see your friend again. Might want to dispatch him, lest he reproduce and add to your collection. :<)

Be careful walking at night. During the day, if you see what looks like a cow patty, it may not be...

I'll certainly take your warning under advisement, Ben. They also look like sticks or tree limbs stretched out across the trail to our house.