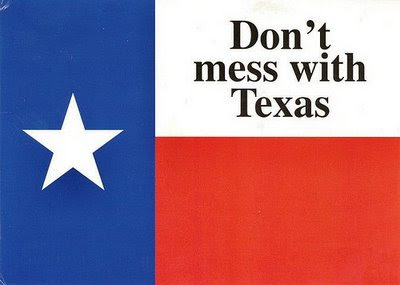 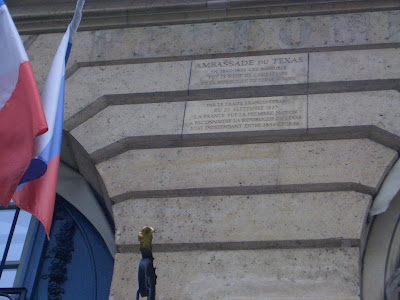 I love Texas for its attitude as well as its landscapes. Texas is “The Lone Star State” because it was once the Republic of Texas. Paris, France, still commemorates the Ambassade Du Texas, 1842-1843, as shown in the photo. Interestingly, the Republic of Texas’ relationship with France was strong enough to warrant naming one of its towns after the City of Light. Love it or leave it, Texas is one unique state.

I spent many years living in Texas, and from its panhandle to the Gulf, Texans are full of pride. The “Don’t Mess With Texas” signs that dot its highways warn outsiders of its no-littering policy, but truthfully, this slogan is also an anthem. Where else but Texas would you find a semi-automatic pistol mailbox? ’Nuff said. 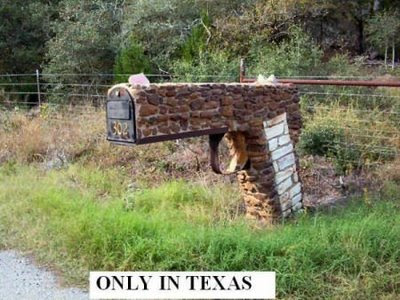 Writers love creating Texas characters because of their distinctive qualities. Movies and TV shows love to portray oil barons as rotund, boozing, loud-mouthed middle-aged men who wear cowboy boots, cowboy hats, and drive Caddies with bull horns on their hoods, and while I’ve seen plenty of Texas businessmen in boots and hats with their suits, I can’t say that I’ve ever seen a bull-horned Cadillac on the street. Now gun-toting pickups are a whole different animal, and they’re certainly not on the endangered list. 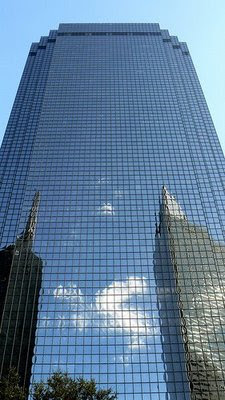 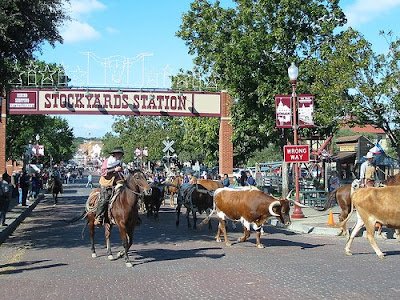 Because of its stereotypes, people may not realize that Texas has as much geographical variety as California, and along with its topography, its dialects can vary by city. Even towns that are physically close like Fort Worth and Dallas have completely different feels, so if you’re going to write Texas characters into your stories, you had better know what you’re talking about. You’ll find Dallas is as cosmopolitan as Chicago while Fort Worth rivals any cow town. I suspect that Fort Worth’s “Billy Bob’s” is where the country group Alabama realized that “if you’re gonna play in Texas, you gotta have a fiddle in the band.” Of course, some might compare Houston to Nashville because it’s turned out so many country musicians.

The point to all of this is that researching characters is as important as researching locations. Sometimes stereotypes are suitable, but most of the time they’re not, and thinking that Hollywood has done its homework is simply naïve. For example, when some Navy friends of mine spoke to the director of the movie Topgun about its inaccuracies, the director replied, “We’re not making a documentary.” While it’s true that fiction writers make up their stories, unless you’re writing fantasy, it’s best to keep your characters and locations believable. Doing so makes it easier for the reader to put themselves in the setting and become emotionally attached to your characters.
Posted by Mark W. Danielson at 12:32 AM

Good points on setting. I'm about to embark on a trip to Memphis to research the setting for my book for Berkley Prime Crime. I think it's important to get the facts straight.

I spend way too much time in Memphis, Elizabeth. Please let me know if you need any help.

I've traveled all over Texas and spent time on eastern beaches while visiting my brother Bob before he retired from the Coast Guard. I love the Cajun influence and food, and Galvaston is one of my favorite places to visit.

I agree with your thesis, Mark, and talking about Memphis is a case in point. Memphis and Nashville are quite distinct and the people equally so. I made a lot of visits to Memphis when I was in association management. The Memphis Restaurant Association ignored the state association and went its own way. You get the feeling that Memphis is more Mississippi than it is Tennessee.

Elizabeth, Jean, when you're talking Texas versus Memphis, there is an important difference on BBQ. Texans BBQ beef while Memphians BBQ pork. You sure don't want to mess that up if you're writing about either place!

Also Memphians like their BBQ ribs. Around Nashville the pure BBQ places specialize in the pulled variety. There are a few good rib places, though.

I've spent some time in Texas, and while I like the state, I have always been surprised at the number of various forms of cops. They seem to be everywhere. There's city, county, state and Rangers, and there seems to be an abundance of all of them. I've not noticed this phenomenon in other states, but every time I've been to Texas it certainly stood out.

Ben, you're forgetting the highway patrol, border patrol, FBI, etc.. But if you really want to see an over abundance of law enforcement officers, check out Paris. They're in cars, trucks, vans, motorcycles, horses, feet, and even roller blades. Amazing.