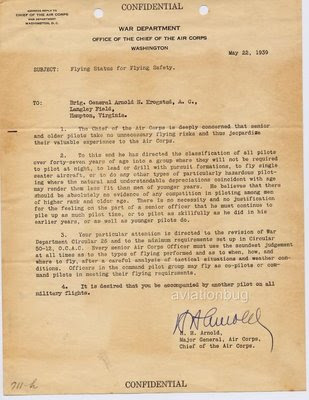 By Mark W. Danielson
This formerly classified May 22, 1939 letter from Maj Gen “Hap” Arnold to Brig Gen Krogstad recently surfaced, and I think it’s worth sharing.

“The Chief of the Air Corps is deeply concerned that senior and older pilots take no unnecessary flying risks and thus jeopardize their valuable experience to the Air Corps.

To this and he has directed the classification of all pilots over forty-seven years into a group where they will not be required to pilot at night, to lead or drill with pursuit formations, to fly single seater aircraft, or to do any other type of particularly hazardous piloting where the mutual and understandable depreciations coincident with age may render them less fit than men of younger age. He believes that there should be absolutely no evidence of any competition in piloting among men of higher rank and older age. There is no necessity and no justification for the feeling on the part of a senior officer that he must continue to pile up as much pilot time, or to pilot as skillfully as he did in his earlier years, or as well as younger pilots do.

Your particular attention is directed to the revision of War Department Circular 26 and to the minimum requirements set up in Circular 50-12, O.C.A.C. Every senior Air Corps Officer must use the soundest judgment at all times as to the types of flying performed and as to when, how, and where to fly, after a careful analysis of tactical situations and weather conditions. Officers in the command pilot group may fly as co-pilots or command pilots in meeting their flying requirements.

It is desired that you be accompanied by another pilot on all military flights.”

While I empathize with General Arnold wanting to protect his leaders, I’m not sure I agree with his assessment of aging pilots. After all, I taught air-to-air combat in the A-4 until we retired the aircraft a year before I left the Navy. With age came experience. Why else would have taken me so long to realize that if I just kept my opponent in front of me, I wouldn’t have to contort my body to keep him in sight? And who would you rather have as an airline captain? An “old” experienced pilot, or a “young” inexperienced one?

Recently, the FAA upped the airline pilot retirement age from sixty to sixty-five, provided the pilot can still pass the FAA medical. Today there are plenty of “over-sixty” pilots flying, and they are far from being “over the hill”. Most may wear glasses now and have gained a few extra pounds, but when bad things happen, their experience is invaluable. As much as I’d like to tell my chief pilot, “Sorry, but I can’t fly tonight because it’s dark”, or “Sorry, but there’s a line of nasty clouds out there. No can do,” I don’t think he’d buy that. So in that regard, I have to wonder if General Arnold ever regretted sending his letter to General Krogstad. No doubt it spurred a lot of chuckles among his Air Corps pilots.

Flying is inherently dangerous, and every pilot knows the risks. Clearly, younger pilots take more chances than older ones, hence the saying, “There are old pilots and bold pilots, but no old, bold pilots.” (Actually, there are a few, but you get the point.) Regardless of its risks, no other job provides the elation a pilot gets from being airborne, slipping the surly bonds, and touching the face of God.
Posted by Mark W. Danielson at 12:17 AM

I wonder hop Hap came up with 47 as the break point for old age? I guess the thinking changed when World War II came along.

Interesting article, Mark. Judging by the number of older drivers who exceed the speed limit, I would imagine there are older pilots who still take chances, although tempered with experience. I'm reminded of Scully's recent bay landing. Give me an older pilot to fly with any day. :)

I agree with Jean...experience flying is most important to me. Funny to think of 47 as being old!

Chester, I suspect that age 47 had more to do with rank than anything else. Arnold didn't want to lose his general officers, so this was his solution.

Until recently, the retirement age for airline pilots was 60; a number that dates back decades. The new retirement age of 65 is equally arbitrary, but at least it ties in with Social Security -- for those fortunate enough to see any benefits.

Jean, speaking as an "older" airline pilot, I'm with you:) Piloting experience accumulates over years of survival. Failure to do so lists you as a statistic. I don't know many airline captains who take chances. Most realize that doing things "by the book" is the way to go since "the book" has been written in blood.

Age is a state of mind, Elizabeth. But "getting older" has all sorts of benefits -- like a senior discount at Denny's:)