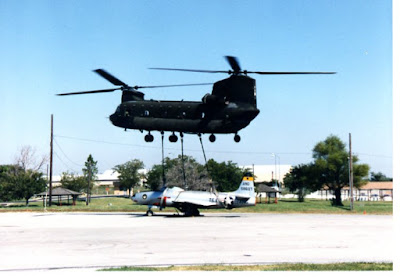 My last two years in the Navy were spent serving as the project officer in charge of re-opening Carswell Air Force Base as a Navy-sponsored joint reserve base. Since no one told me how they wanted it done, I “winged it”; displaying museum aircraft from all service branches throughout the base. With NAS Dallas closing, the three airplanes on display there needed to be moved to Fort Worth. Having had some experience in airlifting aircraft before, I asked the Army National Guard in Dallas if their heavy-lift Chinook helicopters could do the job. After resolving some funding issues, the Guard gladly accepted my request.

NAS Dallas only had one Navy aircraft to relocate, so I felt this A-4 should be the first to fly. After all, there were still plenty of A-4s, should anything go wrong, but the Air National Guard’s Korean War vintage F-80 and F-86 were irreplaceable. Once the A-4 was safely delivered, I gave the go-ahead to transport the other aircraft.

One thing about inter-service cooperation is you must trust everyone to do their jobs, so when the Air National Guard said their F-80 was ready to go, no one doubted them. Things began spiraling when the Chinook’s landing gear smashed through the F-80’s canopy while hovering to connect the sling, but then disaster struck when the F-80 jackknifed seconds after lifting off the ground. At this point, the helicopter crew released their line, plopping the jet on the ground. The F-80 successfully landed on its gear, but its tail section was now resting vertically against its fuselage. But wait, there’s more. After all, why leave the jet this way when you can blow its tail section clear across the parking lot while you land to retrieve your sling? You guessed it -- that’s exactly what happened. Ouch! 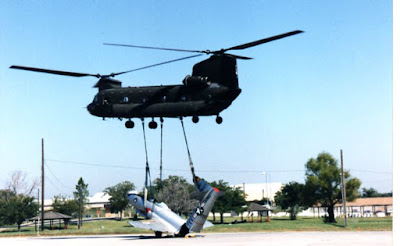 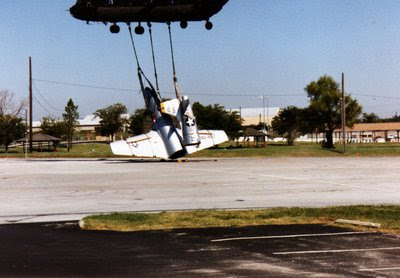 I missed out on all this because I was standing on the Carswell ramp awaiting the F-80’s arrival. Suddenly, word came that there was a problem, and that the F-80 wouldn’t be coming. My jaw dropped when I later reviewed the video. The problem stemmed from the Air Guard’s not installing the correct bolts in the F-80’s fuselage. Like many fighters, this aircraft was designed so the entire tail section could be removed to perform an engine change, so when the weak bolts sheered, the helicopter’s sling popped the F-80’s tail like a Coke lid. Thankfully this happened close to the ground or we would have completely lost the aircraft. 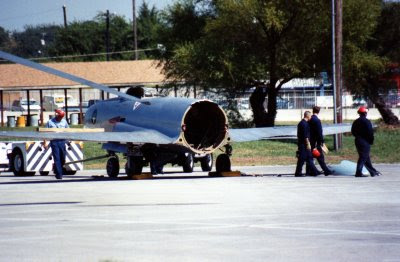 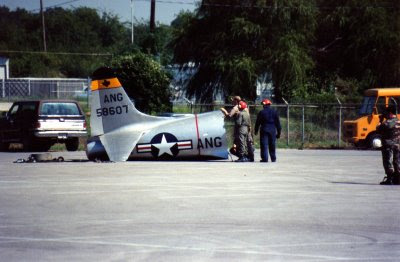 Later that day, members of the Air National Guard, Navy Reserve, and Air Force Reserve began repairing the F-80. Incredibly, within two weeks, this aircraft was pieced together, airlifted to Carswell, and put on display, and a year or so later, outtakes from this calamity were shown on America’s Funniest Videos. Personally, I had no problem with this. After all, laughing is better than crying, right? But the important thing is this F-80 continues to serve as a testament to the concept of joint operations. As they say, all’s well that ends well.

Our museum had grown to fourteen aircraft by the time NAS Joint Reserve Base Fort Worth was commissioned in October, 1994. Today, this base continues to thrive with active fighter, tanker, and transport aircraft from the Air National Guard, Air Force Reserve, Marine Corps Reserve, and Navy Reserve, and since it was designed to minimize duplication of effort, this base is saving taxpayer dollars. I was proud to have played a small role in establishing it and preserving our aviation history with its museum.
Posted by Mark W. Danielson at 12:42 AM