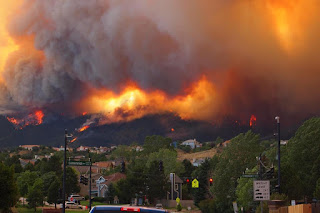 I may have recently left Colorado to build our retirement home in Texas, but I still fear for and empathize with our Colorado friends.  What is taking place there is the inevitable firestorm we all feared.  For years, the forests have been dying from the Japanese beetle infestation, and this year has been dry with record high temperatures.  Fueled by strong winds, the Rocky Mountain’s forests have become kindling, and the thousands of firefighters on scene are no match for nature’s fury.

Many years ago, I wrote a story called First on Scene.  It began with the 1989 Loma Prieta earthquake in the San Francisco Bay Area and then went to the 1991 Oakland hills firestorm.  I have never tried to publish this book because publishers generally don’t care for books that use nature as the antagonist, but it was a real education nonetheless.  The Oakland hills fire, which stopped a mile from my parents’ house, killed 25, injured 150, destroyed 3,354 single family homes, 437 apartment and condominium units, and burned 1520 acres.  The economic loss was estimated at $1.5 billion.  Now, Colorado Springs is experiencing the same kind of conflagration in the fire’s seemingly unstoppable rampage.  Tens of thousands have had to evacuate their homes, businesses have been shut down, and yet this is only one of the Rocky Mountain fires that are burning out of control.

Even though there is nothing I can do and I had nothing to do with any of these fires, I watch the images feeling like a Titanic survivor.  The entire Front Range is choking in smoke and there is no relief in sight.  This summer promises to be a long one for anyone living in Colorado.  At best, they will get some rainfall.  Worst case, lightning will spark more fires.

Rightfully, these infernos have caused national interest.  People now realize that we are at war with nature – but we are also still at war in the Middle East.  Let’s keep our thoughts and prayers with all of those fighting for us, both here and overseas.  They truly need our support.
Posted by Mark W. Danielson at 11:48 AM

I share your feelings about the fires, Mark. We're burning here in Wyoming and I can't get backstage to post my blog about it for some reason.

It sickens me to see all of these reports of loss. I have been making daily flights over the area and see how badly the smoke has increased which has now made its way to Texas.

With all the natural disasters that afflict humanity, how come we keep inflicting disasters on each other?

I wish I could answer that, Carola. Here it is a year later, and we are battling the same issue -- the topic of my July 1st, 2013's blog "Welcome to Hell!"