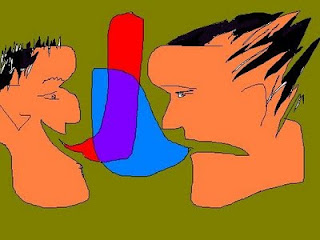 Another aside on the question of language, partly inspired by the sacking of Cheryl Cole from an American TV program because her accent was said to be incomprehensible to US audiences. (Note to self – remember never to watch another movie with Holly Hunter doing her southern accent unless accompanied by an interpreter.)

‘Hell is other people’. Of course it is. They judge us by how we look and what we wear, and there’s nothing much we can do to alter their hastily formed opinions. I’m not just bemoaning the fact that, as a decrepit male, I can’t be photographed standing naked behind a pile of my books and hope it’ll create a sudden boost in sales. No, I think it’s a self-evident truth. We’re judged by how we look and, perhaps most of all, by how we speak.

(As an aside to this aside, I should add that writers are also judged by their books. After reading a passage from my first book where my detective sits at traffic lights watching schoolgirls cross the road and reflecting on how they look, my wife said “Oh. So you fancy schoolgirls then, do you?”)

As a writer of both novels and plays, it’s the speaking bit of the equation that interests me. Without wishing to offend anyone, I’d suggest that if you have a character saying “The proliferation of epistolary exegesis prohibits the development of arcane terminology to a devastating extent”, he won’t be carrying a hod on a construction site.

No, the real problems arise when you want to convey accents. If someone has a strong regional accent of any sort, that’s part of who they are. Take the accent away from them and they cease to be the same person. The trouble for the writer is that he/she needs to convey the accent in such a way that the reader doesn’t have to stop to ask “WTF’s that all about?”

I encountered this with that same first book. It’s set where I live, in Aberdeen. I come originally from Plymouth, which is at the opposite corner of the UK, so you can imagine the disparity between the accents I heard when I was growing up and those I hear nowadays. In a pub in Plymouth (and I know because I lived in one) you’ll hear ‘Wobbe gwain ev?’ The same question in an Aberdeen pub might be ‘Fitchy wintin?’ Both are asking you what you want to drink. In ‘correct’ English, the first is ‘What are you going to have?’ and the second is ‘What are you wanting?’

So when, naturally enough, I made some of my fictional local policemen speak with an Aberdeen accent, my editor in London put me straight right away. “Fa ye spikkin till?” (To whom are you speaking?) and “Fa’s 'e loon?” (Who is that boy?) would mean nothing at all to anyone south of the border between Scotland and England and her suggestion was that I should restrict myself to letting the characters say ‘Aye’ to indicate that they were Scots. In the end, there had to be a compromise, so they weren’t incomprehensible, but they did retain some of their accents.

The annoying thing then was that, in an otherwise very enthusiastic review of my second book, the local paper wrote “Some of the Scots dialogue is a little suspect and inconsistent”.

See what I mean? Hell really is other people.
Posted by Bill Kirton at 1:26 AM

I'll second that sentiment, Bill, although trying to read phonetically written dialogue does slow the reading (eepecially if the writer includes a translation dictionary in the back of the book.) :)

Yes, Jean. If I find myself reading a book where the author feels the need to supply a glossary of terms at the end, I shut it immediately and move to the next in the pile (or, more accurately, nowadays, to the next ghost lurking somewhere in the Kindle list).

I have never used a glossary in any of my books, but I have often considered it.

Because some things, in Brazilian Portuguese, can't be rendered properly in English.

And other things, IMHO, shouldn't be.

Remember that scene in "For Whom the Bell Tolls" where Hemingway repeatedly uses the word "cojones"?

There's no glossary in that book.
But trying to extract the literal meaning from context alone is impossible.

Should he have included a glossary?

Or should he have rendered the word in English?

My answer to both questions would be "no".

But I puzzled over the meaning of "cojones" for years.

Hmmm.
Come to think of it, maybe that was something else that made the book so memorable.

Nice point and a good illustration, Leighton. I think it's only when the terminology is exclusive (in the sense that it excludes the reader from comprehension) that I'd take issue with the writer. In the case of Hemingway's 'cojones', its frequency in different contexts in the end conveys if not its specific meaning, at least its essence - and that's an added pleasure. It gives words more flexibility. It's when something leaves you with no idea at all what's intended that problems arise.

It is a problem. I'm using some Cornish dialect words (not Cornish language words) in my WIP, but I'm careful to make the context explain them.
I was very happy to get a review of my one US-set book, The Case of the Murdered Muckraker, that commented favourably on my use of the different varieties of English found in America.

Brave of you to attempt the variations of US English, Carola, and congratulations for finding favour with a reviewer for it. As a Devonian, I find the little distinctions between the county accent, the Plymouth accent and the Cornish accent easy to hear but very difficult to convey on the page.