This is the cover of my next book, the 20th Daisy Dalrymple mystery, due out in January 2012. I really like it, and when I posted it on Facebook so did nearly 80 people! 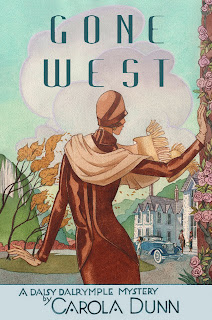 It looks rather more like a mansion than the farmhouse it's supposed to be. At least I had some input--I got "them" to reduce the size of the car and increase the size of the hills. It's set in the Derbyshire Dales, a fairly rugged part of England, and Eyrie Farm is in an isolated spot surrounded by steep slopes.

Daisy drives herself to Derbyshire in her newly acquired a motor-car. It's a 1925 Gwynne 8, a two-seater with a dickey. 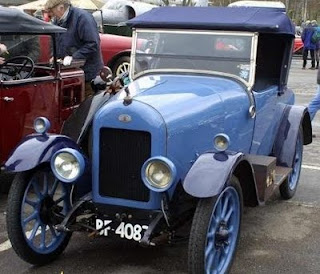 Daisy stalls on a steep hill. She has to double-declutch to get the car going again. Having insisted on a self-starter, she doesn't have to crank the engine.

I'm not sure whether I ever learned to double-declutch, but I remember my mother doing it in our 1934 Morris, in the late '50s and '60s. It had a button on the floor to start it, though I think she had to crank it occasionally. The windshield opened in inclement weather. Towards the end of its life, the doors were held closed by straps around the door handles. 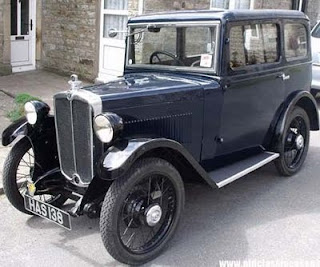 It was known as Uncle Morris, because it was purchased with a legacy from Uncle Maurice, my godmother's father. I decided to google his name, and found this, from the London Gazette archives:

NOTICE is hereby given, that the Partnership
heretofore subsisting between us, the under-
signed, Maurice Jellinek and Henry Jellinek, carrying
on business as Brush and Fancy Goods Merchants,
at 44 and 45, Farringdon-street, in the city of London,
under the style or firm of H. JELLINEK AND CO.,
has been dissolved by mutual consent as and from the
28th day of February, 1915. All debts due to and
owing by the said late firm will be received and paid
by the said Maurice Jellinek,. who will continue the
said business under the style of H. Jellinek and Co.
—Dated this 25th day of January, 1916.
MAURICE JELLINEK.
HENRY JELLINEK.

I'm sure it must be him, because I remember we always had a set of washing-up (dish scrubbing) brushes called Tip, Top, and Shine that came from the family firm.

Ah, the highways and byways of Google...!
Posted by Carola Dunn at 2:00 AM

That's a lovely cover, Carola. Very classy. How interesting to find something like that about your ancestor. My husband is into genealogy, and it's amazing what is out there. It's like taking a breath of the past.

I love your Daisy book cover, Carola, but what is a "dickey?" Is it what was called here a "rumble seat?" A two-seater that can be pulled down from the trunk area?

Yes, a dickey is a rumble seat. Don't ask me why.

Jaden, not actually my ancestor--my godmother's father. I have found out quite a bit about my mother's family through cousins who are into genealogy.