America The Confused, The Divided 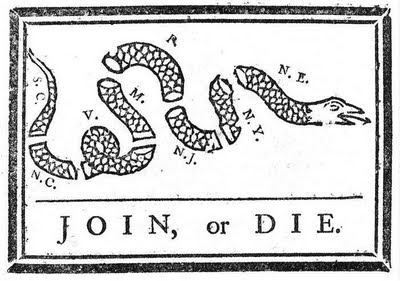 By Mark W. Danielson
Benjamin Franklin published this well-known Join, or Die political cartoon in the Pennsylvania Gazette in 1754. It is the earliest known pictorial representation of colonial unionizing by a British colonist in America. On July 4, 1776, representatives from thirteen now-united colonies signed their Declaration of Independence telling England to fight us if you dare. The colonists won the ensuing Revolutionary War with help from the French and built a nation based on the concept of liberty—where those who work hard are rewarded for their effort. People from around the world came to this new country to fulfill their dreams. Through their dedication, determination, and ingenuity, they created an economy grand enough to make the United States of America the most powerful nation on Earth. This didn’t happen without injustices, though. Native and slave populations apparently were exceptions to our Declaration’s Preamble, which states that “. . . all men are created equal, that they are endowed by their Creator with certain unalienable rights that among these are Life, Liberty, and the pursuit of happiness.” In spite of this, our nation grew because its citizens pledged allegiance to their flag; a flag now bearing fifty stars honoring its states, the last being added on July 4th, 1960, following Hawaii’s statehood.
But much has changed since 1960. Our nation went through hell in Vietnam, and welfare reform paved the way for generational government handouts where many able-bodied welfare recipients have never worked for their stipend. Today, we are stuck in another endless war, and our government is giving out so many hand-outs that it is cutting critical education programs. Our infrastructure is in dire need of repair, but rather than fund our projects, we send money to foreign countries to repair their infrastructure. Those with health insurance pay extra to cover those who contribute nothing. Had our Forefathers maintained this attitude, our nation would never have been built.
September 11, 2001 was a shot in the arm for nationalism when, for the second time, The United States was attacked without provocation. For a brief period, we stood united again as people of all races and walks of life shared their outrage against those who hijacked four airliners to destroy the World Trade Center, a portion of the Pentagon, and our way of life. But our memories are short, our dedication slim. Soon, US flags were replaced with banners from others’ “home” countries. Ironically, many of these people flying foreign banners gladly accept the benefits and protection of our country without bothering to even learn its language. They have no problem standing in line in the Social Security Office demanding money they have not earned on the basis of entitlement. And though our nation is severely in debt, politicians won’t touch these subjects because it is politically incorrect.
If our country is to survive, all citizens must unite and stand together as Americans. It will require sacrifices for the common good. It will require all able-bodied people who are receiving government compensation be required to work for their stipend. It will require a paradigm shift from entitlement to President Kennedy’s work ethic of “Ask not what your country can do for you, ask what you can do for your country.” We are still the People of the United States, and in order to form a more perfect Union, establish Justice, insure domestic Tranquility, provide for the common Defense, promote the general Welfare, and secure the Blessings of Liberty to ourselves and our Posterity, we must all work together. Let’s give reason to celebrate this Independence Day by changing our focus from me to us, and become the nation our Forefathers intended.
Posted by Mark W. Danielson at 12:01 AM

Spoken like a true patriot, Mark. I couldn't agree with you more. But I fear that we've already gone past the point of no return.

I share your sentiment, Jean. Only time will tell.

I share your feelings about the need to return to the work ethic that built this country, but there aren't enough jobs around now to permit it. Left alone, the marketplace would not have allowed people to borrow and build homes they couldn't afford. Our pandering politicians forced them into it, bringing on the mess we have now, worsened by the big banks and investment houses that made things worse packaging and selling bad mortgages. It's going to take a lot of work by a lot of people to get things back where they should be.

During the Great Depression, FDR put America back to work by creating the Tennessee Valley Authority. The TVA employed thousands of people to upgrade our infrastructure. Since then, the Federal Government has been giving hand-outs to able-bodied people without requiring work in return. Meanwhile, our infrastructure is falling into disrepair. Adding insult, the Federal Government has shunned our own college students by importing foreign college students to work summer jobs. In Colorado alone, 2100 US parks jobs went to foreign students on special visas because they don't have to provide benefits and these kids will work longer hours. Meanwhile, we continue to send money overseas to rebuild their infrastructures thinking it will buy friendship, but as anyone from the Middle East will tell you, the recipients are laughing all the way to the bank while funneling our donations to our enemies. I agree with you, Chester, it will take a lot of work to get things back on track, but most of all, it will take every American to do their part, and that includes our politicians.