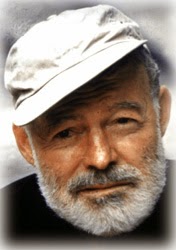 Ernest Hemingway has always been my writing role model. Not only because his work changed the face of writing, but because he was a fellow novelist and journalist. My interest in him intensified when I learned that I was born on his birthday, July 21. A framed photograph of him sits on my office desk, and I was told by Elmore Leonard, during my interview with him, that a large photo of Hemingway hung in his office because he was also most influenced by his work.

The following are a few of Hemingway's quotes:

~There's no rule on how it is to write. Sometimes it comes easily and perfectly. Sometimes it is like drilling rock and then blasting it out with charges.

~[I'll] work again on the novel today. Writing is a hard business, but nothing makes you feel better.

~I love to write. But it has never gotten any easier to do and you can't expect it to if you keep trying for something better than you can do.

~The good parts of a book may be only something a writer is lucky enough to overhear or it may be the wreck of his whole damn life--and one is as good as the other.

~A man's got to take a lot of punishment to write a really funny book.

~Whatever success I have had has been through writing what I know about.

When asked what the best early training is for a writer, Hemingway answered: "An unhappy childhood." Whether his answer was tongue in cheek is irrelevant. I'm sure he meant that emotions such as sadness, anger, rebellion and depression are remembered emotions which contribute to good writing. And writing that elicits reader emotion is the primary ingredient in a successful book.

(Quotes from Ernest Hemingway on Writing, edited by Larry W. Phillips, Scribner, 1984.)
Posted by Jean Henry Mead at 12:00 AM

Hemingway and Leonard - you keep excellent company, Jean. The point you make about the last comment being tongue in cheek confirms the sort of uneasiness I sometimes feel about his seemingly throwaway remarks. It's as if the neatly turned or impact-full phrase is enough in itself, without there necessarily being any 'truth' behind it.

Thanks for your comment, Bill. The Hemingway quotes were taken from Larry W. Phillips book, Hemingway on Writing, and are excerpts from letters the author wrote to Faulkner and other friends, so they could have been in jest. But I agree with most of them, especially: "Sometimes [writing} is like drilling rock and then blasting it out with charges." :)

Excellent Ernest Hemingway Quotes compilation. Also I have collected many quotes from you. Thanks a lot for doing like this job.