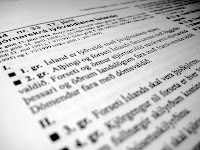 When Iceland became a republic (for the second time) in 1944 the first thing on the agenda was to whip up a constitution. The runner up involved issuing the Flag Law. From this one must assume that at the time our leaders must have believed this the second most important thing to have in place if intent on running a country properly. Now something akin to our Flag Law must certainly exist in other countries but I am not sure if they have retained the same importance elsewhere as they still do here. Almost everyone has heard of them and most people know what they roughly entail. Make no mistake however, this is not due to the foresight of the legislators involved or an uncanny ability to write timeless text but the fact that it has somehow not evolved, a remnant of a long ago time when a flag was something to truly respect.

A couple of years ago I was based in the highlands of Iceland, working as the technical manager for the construction supervision of a hydropower plant. One of the things I was entrusted with was the flag belonging to the owner of the project – who also owned the flagpoles outside my office. Although not technical at all, this flag came with a responsibility that was made clear to me upon the handover, both verbally and with a copy of the Flag Law that I was to familiarize myself with and keep next to the flag at all times. Obviously not when tied to the flagpole, but that was the only excusable exception. One of the very few and precious drawers on my desk had to be sacrificed as storage space for the flag and although at the beginning these two items (the flag and the Flag Law) were the only occupants of this confined space, over time they received visitors in the form of pens, erasers, papers and paper clips. 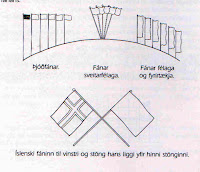 To keep it brief the Flag Law is a pretty strange read as it contains articles that do not strike a thread in the modern day. It is way too serious and restricting, you can’t do this and you can’t do that (with the flag), making it seem like no fun at all. A hugely complicated “how not to place it” in a row of flags involving something about it being at the far left and the placing other flags in alphabetical order to the right, really made me thankful that we only had three flagpoles and thus no chance of the United Nations arriving impromptu and expecting to be greeted by a procession of dozens of flags from countries with oddly spelled names. The left/right thing was immensely complicated because of how the poles were situated; there was no obvious right and no obvious left. 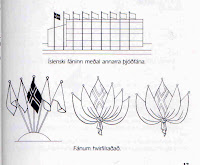 As an example of the strange rules embodied by the Flag Law, one article dictates that all chiefs of police in Iceland are to keep samples of accepted colours and dimensions allowed to make the flag. Such a set is also to be kept in the prime minister’s office. I am tempted to check how strictly this is adhered to, but won’t as I would be too taken aback if these parties actually had such samples in their possession. You might wonder why these samples are so important but this relates to the huge no-no placed on using hues that are a bit off. The police are actually expected to be on the lookout for unacceptable flags, for example if you happen to have a flag that is tattered, has become dull or has somehow changed colours - be prepared to have it confiscated. Once a flag is confiscated it has to be burned – not thrown away or even shredded but burned. The same applies if a flag touches the ground or if you let the sun go down on it – it’s toast.

Finally, using the flag as curtains is forbidden as it is considered dishonourable. Basically anything other than pulling the flag up a pole is considered dishonourable, you cannot make caps or clothing or basically anything with a flag emblem unless you obtain written permission from the prime minister – yeah and that’s going to happen. Now, aside from having the dishonoured flag reduced to ashes, such an offense can mean prison for up to a year, although I have never heard of anyone serving such a sentence. However, who knows what would happen if the police came across a serial flag offender, for example someone hanging up curtains made from a tattered, off hue flag and wearing a cap embellished with the flag while at it.

It probably has something to do with the restrictions placed on tis use by the Flag Law, but we seldom see the Icelandic flag in the foreign media, except possibly on TV in Hungary and India during the kick off for the Olympics and only if their cameramen stray a bit while their teams proceed into the stadium. I can however recall one instance in the past few years where it was prominently displayed on the news all over the world, albeit briefly and very, very dishonourably. Our flag – correct hue and dimensions – was put on fire besides its American counterpart, by Islamic demonstrators who were objecting to the war in Iraq. Now this occurred in 2003 and everyone here was in complete shock as we were not used to being involved in controversy (oh those were the days). We did not invade Iraq so this was also a bit unfair, not to mention in breach of the Flag Law that only allows police to burn a dishonoured Flag and this one appeared to be quite respectable. Our foreign service kicked into gear and made some inquires into the incident – turns out the demonstrators were not good at flags and had been scammed by an unscrupulous flag salesman – they had been sold the Icelandic flag as that of the UK. Too bad for them they did not drop by an Icelandic police station to check out their samples, could have saved them some embarrassment.
Yrsa - Sunday
Posted by Yrsa Sigurdardottir at 11:55 AM

Very interesting. Flag-burning has long been a source of controversy over here, with most folks falling into the "we hate it, but we concede your right to do it if you feel you must."

While I don't think it should be against the law, I've always thought that maybe people who despise a country so much they feel the need to burn its flag should consider going away and living elsewhere.

Yes, interesting post. It's good that Islandic law demands respect for its flag although it sounds as though the government has gone a little overboard with its regulations. While I was growing up, our American flag held much the same respect until the Vietnam War when flag burning became common practice.