Two of my Daisy Dalrymple mysteries that have been practically impossible to find for a long time will be reprinted in the UK this month, release date February 24th.

In The Case of the Murdered Muckraker, Daisy is in New York (following her transatlantic voyage in To Davy Jones Below). After witnessing a murder, she finds herself mixed up in Tammany Hall politics, just before an election. Alec comes to the rescue from DC, where he's been advising J. Edgar Hoover. They end up chasing a suspect across the country in a biplane!

This is my only book set in the US, so I was very happy with this review in Publishers Weekly: "Dunn captures the melting pot of Prohibition era New York with humorous characterizations and a vivid sense of place...Throughout her travels in the States, Daisy is keenly attuned to people and place: race relations, regional accents, even foods all add to the texture of the story."

Mistletoe and Murder: Daisy and Alec are back in England and off to an ancient fortified manor house in Cornwall for Christmas. Daisy plans to write about it. The family of poor relations living there is decidedly out of the ordinary, and as pecularities multiply, animosity culminates in murder.

The setting is a real house, Cotehele, and though I've changed its name to Brockdene for the story, since descendants of the then owners are still around, I've described it as is, including a bit of its history since the 15th century. The main departure from reality is a secret tunnel, which I invented for a Regency I set there (Smugglers' Summer) and thought I might as well make use of again! 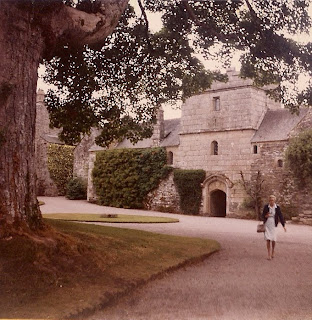 Both titles will be available from theBookDepository , shipping free to US.
Posted by Carola Dunn at 12:52 AM

Congratulations, Carola--on the new releases and on the lovely review from Publishers Weekly.

Thanks, Beth. I've been getting emails for years from people who can't find some of my titles--if you could find a copy of Muckraker it was going for a ridiculous price--so it'll be nice to be able tell people they can get it at last.