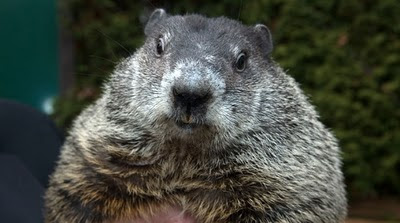 It looks like this year's Groundhog Day may put an end to all the foolishness. When Punxsutawney Phil attempts to poke his ratty nose out of his hole tomorrow morning, he'll probably have to burrow through a couple of feet of fresh snow. If he finds the lack of a shadow a reason to remain outside and frolic, he'll wind up with a frozen tush.

According to the omniscient Wikipedia:

An early American reference to Groundhog Day can be found in a diary entry dated February 5, 1841, of Berks County, Pennsylvania storekeeper James Morris:


Last Tuesday, the 2nd, was Candelmas day, the day on which, according to the Germans, the Groundhog peeps out of his winter quarters and if he sees his shadow he pops back for another six weeks nap, but if the day be cloudy he remains out, as the weather is to be moderate.

The way it looks on the Weather Channel today, it not only most likely be cloudy but snowy and icy and any other precipitative term you can think of. They're calling it the worst snowstorm in a winter of almost continuous storms. We'd all be ecstatic at the thought of spring arriving any day now, but the prospects are for more of the same.

There's an interesting piece on the ABC News site this morning about the outlook for Groudhog Day 2011. The writer talks about the movie Groundhog Day that featured Bill Murray and compares it to what we're facing now. Being an eternal optimist, I'll take Phil's side and hope he stays out to play in the now and then brings a welcome break in our winter of discontent.

Visit me at: Mystery Mania

Posted by Chester Campbell at 11:23 AM

Even here in the usually sunny Texas we're overcast and cold. I'm predicting he did not see his shadow. Bring on the heat!

It's one degree above zero here with snow on the ground and an unbelievable wind chill factor. If the groundhog poked his nose of the ground here, he would pack his bags for Costa Rica.

I don't think I saw MY shadow. Does that mean the groundhog is obligated to bring us some spring?

I'm afraid this just reminds me of a writing job I did once. The client wanted a safety video to stress the risks associated with doing routine tasks - lack of concentration, taking things for granted, etc. I suggested a spoof of that great movie 'Groundhog Day' - offshore worker wakes each day, does the same job, etc. The client liked the idea, we made the video, he loved it, showed it to his committee. They said it was too repetitive.

I got so fascinated by the groundhog that I forgot to put a title on the piece. Blogger picked a weird one for it.