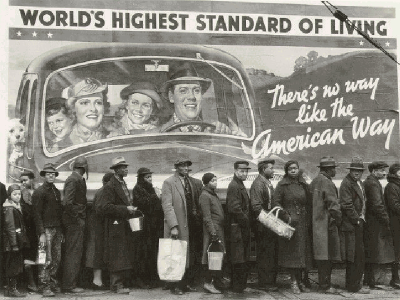 These days there is a lot of talk that the United States is approaching Socialism. While government subsidies and bailouts seem to be the focus of correcting our nation’s economic woes, the perception that we are becoming Socialist is ludicrous. Socialist ideology removes an individual’s rights in favor of state control with the notion that everyone will be working for the common good. While this might be possible in a Utopian world, this concept has not been successful in either Communist or Capitalist countries.

Early in our history, our nation sang, “Give us your tired, your poor.” We welcomed immigrants who possessed skills and a solid work ethic. These immigrants worked hard, learned our language, and contributed to the common good, helping create the world’s most prosperous country with the highest standard of living. But those days are gone. Now, few immigrants make much attempt at learning our language. And why should they when our government prints election ballots in countless foreign languages and spends over 12 billion dollars on educating limited-English students? (Source: American Legislative Exchange Council) No other country caters to immigrants like we do. When people do not or cannot work, they rely on our welfare system to bail them out. To continue this trend will prove disastrous.

While everyone seems to be aware of our nation’s financial crisis, no one wants to admit to its cause. While the crimes of a few corrupt businessmen in the insurance and mortgage industries certainly contributed to our economic down slide, other major causes are our lack of welfare and immigration reform, and strong labor unions that raised wages to the breaking point where governments can no longer pay. Sadly, these politically incorrect topics are rarely addressed, and so the money drain continues.

Lately, California has remained in the headlines because of its dire economic situation. A recent Newsweek article stated that every California household will spend $1,000 of their tax dollars paying for immigrant benefits. It went on to say that California welfare recipients are guaranteed to receive these payments for life. Are you serious? Because of its financial crisis, California is raising its taxes on everything. Sales tax in many large cities has already approached ten percent, and the state is tripling the cost of its license plate renewals. Imagine this impact on new car sales.

Of course, you don’t have to live in California to feel the pinch in your wallet, for there are plenty of other states in financial distress. Even credit card companies are jumping on the tax bandwagon, forcing user fees on those who pay their bills on time to make up for those who don’t. Whatever happened to personal accountability? How far will this Robin Hood mentality go before we put political correctness behind us and tackle these issues?

Here’s one solution for all you politicians. How about making every welfare recipient who is physically able work for their pay? I worked for my government check throughout my military career -- why should they stay at home and receive a check without contributing to the common good? How can this country survive if we continue to rob from those with jobs to pay for those who have no incentive to work? Why do we continue to reward mothers for giving birth to unwanted or unplanned children? President Clinton’s Welfare Reform Act was a step in the right direction, but it failed to correct the problems. And while President Obama’s stimulus program may look good on paper, it hasn’t required a thing from anyone who received its disbursed payments. President Obama has publicly stated that our country has no shortage of work that needs to be done, so why are we paying welfare recipients to stay home? Call me old fashioned, but our welfare program needs change that we can believe in.

Based on this, what we are facing today is a far cry from Socialism. It is not the failure of Capitalism, but rather the result of decades of failed bi-partisan politics, the inability to control our borders and budgets, and the belief that everyone is entitled to everything. Truly, this isn't the "American Way" that our forefather's envisioned.
Posted by Mark W. Danielson at 12:12 AM

The government should sponsor day care centers run by current welfare ricipients so that other single mothers can afford to work instead of collecting government handouts. There should also be a limit as to how many welfare children the government will pay for in one family.

I'm certainly not against giving welfare to mothers abandoned by a spouse, for a certain length of time--six months to a year--but employment counseling should be available to help her find a job.

After reading your blogs I decided I needed a description of Socialism; which lead to what does Marxism and Leninism mean and that lead to social democracy; which lead to complete confusion. To make a long story short, I'm not sure what road our country is headed down, I do know I agree with your sentiment about this isn't the "American Way" that I was raised on.

I still like the idea I heard on talk radio. Instead of the government spending billions on bailouts, take that money and give each tax-paying-legal-American $1,000,000.00. Yes one million dollars, and let them spend it as they see fit. Either pay off a mortgage, bills, invest it, or start a new business venture. Now that's the American way. And don't tell me that wouldn't re-energize the economy. And from the figures I saw the pay-out would still be less than the bailout is now costing us. It seems like a win win situation...too bad the politicians are in charge of these things.

I'll just keep up with the one thing that always works for me, prayer. Amen to that.

Kim, I'm all for having a million government bucks to spend to help stimulate the economy.

I'm sure that a lot of people are still trying to figure out how the mortage collapse affected their jobs.

Hopefully our government will learn from this and keep a closer watch on corporate greed. As for the rest of the world, once we realize we are all in this together, the quicker things will turn around.