As many of you know, I’m a gun guy. Figured if I was gonna write about this stuff, I ought to learn something about guns. And then lo and behold, I found I enjoy shooting, and carrying a piece gives me a better sense of security in a part of the country where home invasions, car jackings and shootings are on the rise.

But the .380? C’mon. I always thought the .380 was sort of a .38 junior, like a spitball that just tumbles out of a pretend-gun. No stopping power, known to bounce off a thick leather jacket.

Well, evidently I was wrong. (Yeah, it happens occasionally, more than that according to my wife.) Because just about every gun manufacturer is announcing a new .380 these days. And of course, they’re all claiming their little pistols are “revolutionary,” whatever that means. And what does it mean? All these pistols are semi-auto, most are double action, and all contain anywhere from six to nine rounds. So what’s revolutionary about that?

In the last year, we’ve seen old standbys like Sig Sauer, Ruger and even Magnum Research come out with one. And the only one is “revolutionary,” at least in the sense of radically new and unexpected ― the Magnum Research Micro Baby Eagle. What makes this pistol revolutionary is its place in the Magnum Research arsenal. Magnum Research is known for its gigantic pistols, the Desert Eagle being the standard. You’ve seen this pistol, it’s the one that requires a weight lifter to just pick it up. The Desert Eagle is huge, perhaps the largest semi-auto manufactured. You can usually find them in the “used” section of your gun dealer’s stock, or on Gunbroker, which usually means someone’s selling one from his collection. Why? Because the Desert Eagle is no fun to shoot; heck, it’s not even fun to lift. I shot a .50 AE Desert Eagle once, and that was enough for me. It goes bang in a big way, lots of fire and recoil, the gun often pictured in You Tube videos banging some unaware shooter in the forehead because of its massive recoil. I don’t know anyone who enjoys shooting a Desert Eagle, which is why so many are sold used. The gun is so ugly, it’s even sold in a gold version. Just pull this gun out and people start running, maybe the shooter, too.

Okay, so here’s the Desert Eagle.

And here’s the Micro Baby Eagle.

Now, a little research will show you that the .380 cartridge is nothing more than a .38 in semi-auto style. It’s essentially the same bullet as found in the .38, the .38 Special, the 9mm and even the .357 magnum, but it’s not the bullet size that counts; it the powder and cartridge in which this bullet resides. Not much oomph here. As I said, the .380 has been known to bounce off thick leather jackets.

So why the demand, especially in this day and age when bigger is usually better and when folks want more rounds than just six or seven? Heck, even the tiny Glock 26, the “Baby Glock” and the Walther PPS come in 9mm and hold more rounds.

Here’s the Glock 26. Holds ten rounds, twelve if a mag extension like the one pictured is added. And it’s a 9 mm pistol, more oomph than the .380.

The answer is .380 pistols, being so small, are easily concealed, and with the number of concealed carry licenses being granted during the Great Obama Panic, concealment is important. You can drop these babies in your pocket, and your pants won’t fall down. Or drop it in your purse, and you’ll have room for your wallet. Wear it on your ankle, and it won’t even pull your socks down. There’s almost no recoil, no big flash of flame, and while not as quiet as a .22 lr, this one won’t break your eardrum.

Some cops carry these guns, but usually only as a second or third back-up. And even then, most prefer a 9mm.

But the economy is down, and fear is up, and many newcomers to concealed carry are nervous about doing so. They feel like everybody is looking at them, and can see they’re packing heat. They want protection, but don’t want anybody to know they’ve got it. A comfort factor.

Yes, I carry concealed. Have a permit to do so. But I opted for the Baby Glock. More bang for my buck. And if I carry a backup, which occasionally I do, it’s a tiny North American Derringer, five rounds of hollow point, .22 magnum bang. I carry it in a pocket holster that also contains eight additional rounds, meaning I’ve got thirteen rounds of powerful .22 mag available. My North American Derringer is petite, about half the size of a .380.

So here’s my back up of choice. You can fit this little baby inside your sock. 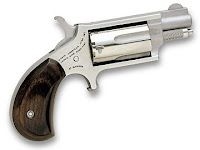 The .22 lr has always been the mob hit man gun of choice, because up close it will do the job with a bang so soft only the hitter will hear it. Put a .22 lr slug in the back of the hittee’s head, and he’s ready for the morgue, probably with an open casket. The bullet will bounce around the hittee’s skull like a pinball, but probably won’t exit. And the .22 mag is just one step up.

So why the .380, if it’s the smaller brother to the .38, with a little less bang and fewer rounds than its cousins?

Hell if I know. But they’re coming out all over, and each one is being called “revolutionary.” Funny thing, though, all these new .380s, and yet the .380 round is one almost impossible to find on ammo shelves. Go ahead, ask your local gun dealer for some .380 ammo. Watch him laugh at you. Better yet, order some from an online store. At least nobody will be laughing with him, because nobody will see your rejected order unless you show it to them.

Impressive article, Ben, but what does it say about our society when so many people feel safer packing a gun? This part of the country is armed to the proverbial teeth and won't give up their weapons without a fight. Gun and ammunition sales are at an all-time high and the shelves are but empty here.

Actually, Jean, it's part of our heritage. We wouldn't have defeated the Brits or Indians unless every homeowner didn't own a gun. There's one town in Georgia that required every home to have a gun back in the 80s. They haven't had a murder yet. Our culture and society is breaking down. You see it in the schools, in the streets, in the declining civility in the courts and everyday relations. Whether or not one needs a gun is an individual or family issue, but consider what your police response time is should a problem arise. Consider also that the two cities that have the highest gun crime rates, Chicago and D.C. have the strictest gun control measures in the country. In both, the only people without guns are the law abiding citizens.

I know, Ben. I'm a firm believer in the second amendment.