No, I’m not suddenly into government themes. It’s just that sometimes things happen that are worth sharing, and although this story pertains to the Colorado Department of Motor Vehicles, the situation is not limited to this state or governmental agency. The scenario is we purchased a new car, traded in a Honda, and needed to give the dealer the title for our trade-in. The problem is we put the Honda’s title in such a safe place that we couldn’t find it. The solution seemed easy; get a duplicate title from DMV and all would be right with the world. Unfortunately, doing this proved harder than it should have been.

We approached the DMV officer armed with Lyne’s driver’s license and passport because her last names differ on both. Long before her name became an issue, we were advised that even though the Honda’s lien was paid off years ago, DMV keeps no record of such things and their records still showed Wells Fargo’s original lien. We were referred to Wells Fargo to get a statement showing their lien was paid off. After this, DMV would issue a duplicate title, which we would then have to take back to Wells Fargo, they would sign off the lien, and we could drop the title off at the dealer. With a Wells Fargo bank handily nearby, we decided to walk, even though thunderstorms lurked in the distance. All was fine until the bank’s receptionist said they couldn’t help us and referred us to the Wells Fargo Financial office. Eyes rolling, we left, thankful that Wells Fargo Financial was only a few miles away. Still, the changing weather was making time an issue.

Under gray skies, we quickly walked back to the car, constantly surveying the ominous sky. Having had several continuous days of tornado warnings, heavy rain, lightning, and hail, it didn’t seem prudent to continue our trek with the new car. How about putting it in the garage and taking the old one that stays out front? But before we do that, why not re-check our files for that title? Sadly, our search proved futile, but at least our new car was safely tucked away. 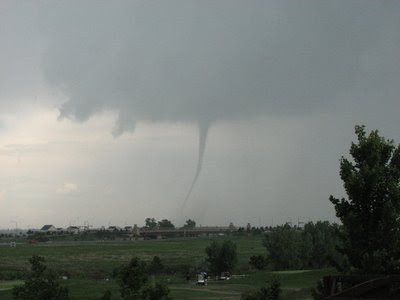 With our second letter in hand, we returned to DMV under even more ominous skies. So far there was no hail or tornados, but anything could happen. (This photo was taken two blocks from our house the day before.) This time our DMV lady was busy assisting a rather difficult client so she referred us to her neighbor, Bill. I couldn’t help thinking how “Bill” seemed an appropriate name for someone who collects money from clients. Thankfully, Bill was exceptionally friendly and equally brilliant. After gladly accepting our Wells Fargo letters, he noticed that Lyne’s first name was spelled differently on the title than on her driver’s license. How could that be, we wondered? Well, mistakes happen. After all, I’m still trying to correct Social Security’s error of missing my birthday by one day. (I may share that story on a later blog.) In any event, Bill quickly handled the discrepancy by printing out a form that showed both of Lyne’s names, had Lyne sign it saying that she was known by both names and spellings, and that was the end of it. After presenting Bill with a nominal check, we were finally out the door with the duplicate Honda title.

So, how much time did it take to accomplish this? Five hours and six trips, to be exact. But don’t blame DMV. After all, we were the ones who misplaced the Honda title, and as hard as it is to admit this, the DMV lady was just doing her job. The Washington DC DMV sign pictured below provides a clue as to the problems these DMV people deal with on a daily basis. Besides, who has ever accused a government agency of being efficient? By necessity, bureaucracy has always been about dotting I’s and crossing T’s. So, the moral of this story is simple: find a safe place to keep your important things and then remember where that place is. Like maybe a safe deposit box. After all, it might save you some gray hairs. As for the crazy weather Denver has had? God only knows. 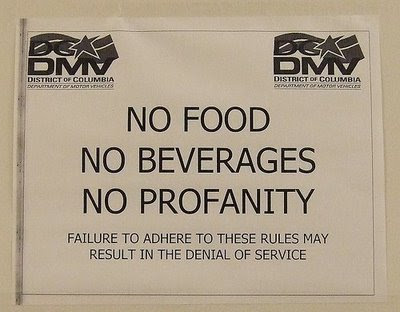 Ohhhhhh. What a nightmare! Dealing with the DMV (or any government office) can be so frustrating.

I LOVE the picture of the sign that you included! Wonder why they thought the "no profanity" was necessary? Hmmm...

How frustrating! My driver's license expires next month so I'll also be headed for the DMV. Hopefully this prolonged storm front, which stretches from Colorado north will let up soon. We've also had tornado warnings from the newly installed weather tower a quarter mile north of us, which jolted us out of bed with the blast of a siren and a man's voice saying, "Take cover. Severe weather warning."

Elizabeth, I suspect there are days when the DMV folks want to pull their hair out, too. There must be a reason the DC office included "no profanity" in their sign. While it's immensely frustrating dealing with various government agencies, they're often limited in what they can do. The solution? Bring along a good mystery to help pass the time:)

Jean, I'll take the DMV office anytime over the Social Security office. As for the severe weather -- today was our first day of reasonable dry. Perhaps summer will come yet:)

With all the tornados we've had, I have yet to hear a siren. Apparently my city considers them a luxury because "we rarely have tornados." (Yeah, right.)

I was told that DMV DC was ru pretty well. There is a reason behind that sign.